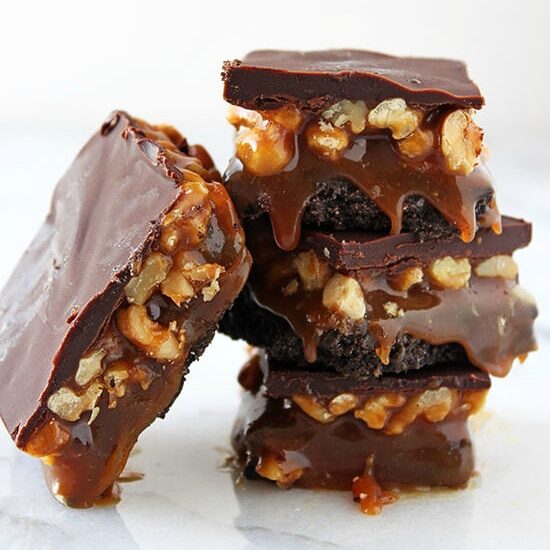 Oreo Caramel Walnut Bars are so rich and decadent with a layer of Oreo cookie crust, a layer of thick salted caramel and walnuts, all topped with chocolate. Dubbed "one of the best desserts ever!"

Taste: Just blissful. Some kind of perfection happens with the combination of Oreos, homemade caramel, walnuts, and chocolate. Texture: Crunchy, sticky, gooey, thick, smooth, and rich. Every bite offers such a great mouthfeel. Ease: Don't be intimidated by the homemade caramel sauce part!! It's really not that difficult and I have a step-by-step video tutorial on the stuff. Appearance: Messily delicious. Pros: Wonderful dessert that will make you smile with each bite. Cons: A little messy all around. Would I make this again? Oh yeah.

Oreo Caramel Walnut Bars are so rich and decadent with a layer of Oreo cookie crust, a layer of thick salted caramel and walnuts, all topped with chocolate. Dubbed “one of the best desserts ever!” 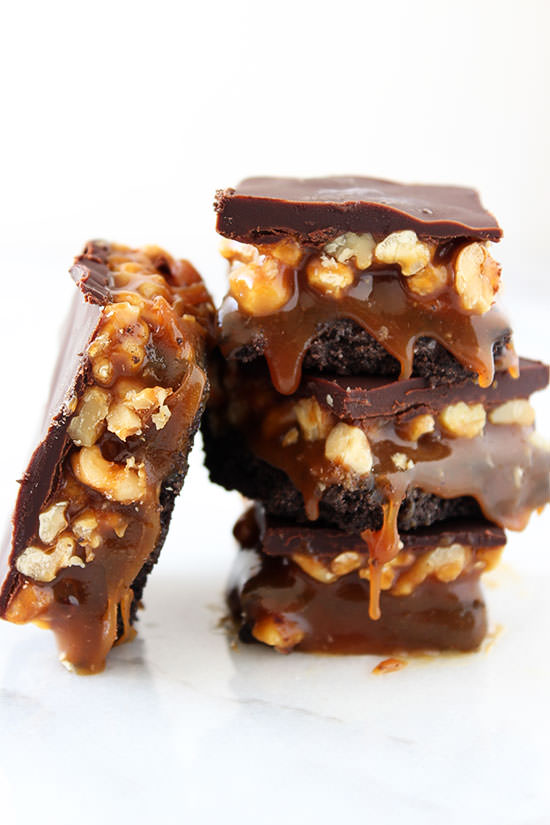 Happy Monday! I’m brightening up your Monday with these crazy good Oreo Caramel Walnut Bars but first I have to tell you what a crazy weekend it was. It’s been kind of a crazy month weather wise, we had the storm of a century this month. Then last week our house was a bit of a wreck as we had our cabinets professionally painted right after coming back from staying in northern Arizona. Saturday got REAL nutty, though, when another crazy storm rolled through Phoenix. Of course the storm appeared suddenly and wrathfully moments before Jared was scheduled to play and outdoor music festival with his band in Tempe. No joke, we all stepped outside the dressing room trailer and were shocked to turn around and see a wall of dust and storm clouds coming directly our way FAST.

We headed over to the stage which has began to shiver with the wind. Suddenly a microburst or something came through and things got really bad. Rain started to fall and the production crew evacuated the entire concert, telling everyone to run for cover under the bridge on the opposite side of the grounds. Everyone started to get panicky as all the band’s gear was sitting on stage, about to be pounded by rain and possibly a collapsing stage. It was crazy. Luckily some of the guys were able to save some of the gear from immediate damage because later a lighting truss actually did collapse on stage. Thankfully no one was hurt and the damage was fairly minimal all things considered. However we all got DRENCHED. I remembered after the scorching summer what it feels like to be cold. There were trees collapsed on the streets, street lights out of service, and in some areas of the valley entire blocks of power lines came crashing down.

Note to self: don’t attend an outdoor concert during Arizona’s monsoon season! 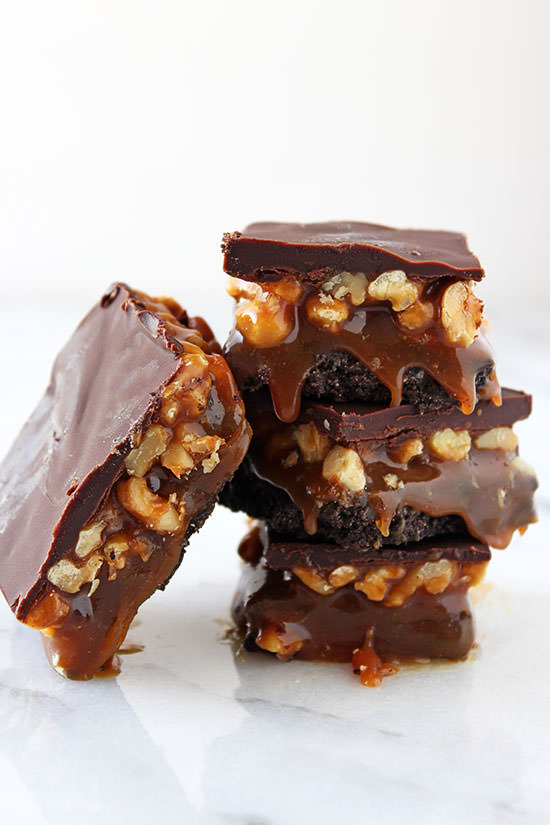 How was your weekend? Much more relaxing I hope. When I got back from the concert chaos the first thing I did was munch on one of these Oreo Caramel Walnut Bars. They are absolutely scrumptious, Jared actually said they were one of his favorite things I’ve ever made!

This recipe makes a super thick, smooth, and indulgent homemade caramel sauce. If you’ve never made caramel before check out this video tutorial, the recipes aren’t identical but the methods are the same. The bars are chilled in this recipe, making them nice and solid. However, once they are sliced they tend to get more gooey, especially if it’s warm which is exactly what happened when I photographed these. That’s why they’re best served cold and immediately after slicing, especially if it’s a warm day. Messy or not, they taste absolutely amazing.

If you make these Oreo Caramel Walnut Bars, be sure to take a picture and tag it #handletheheat on Instagram. I love seeing your photos! 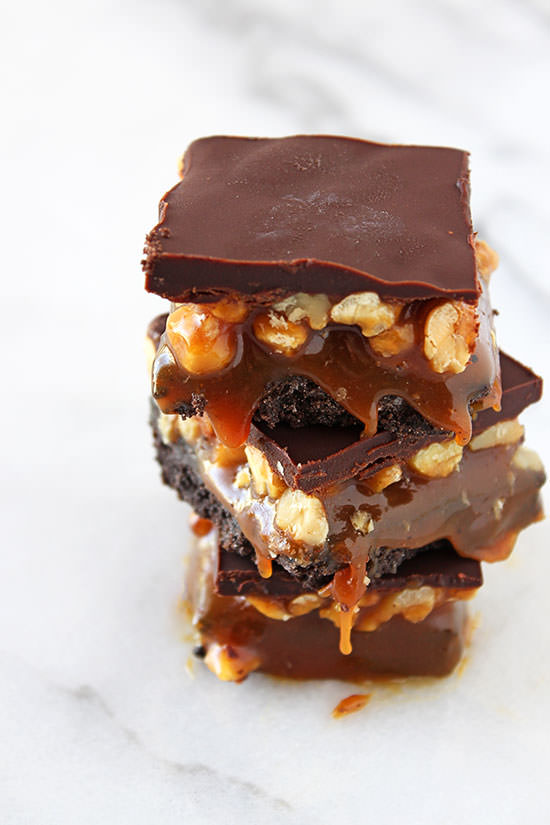 Love Handle the Heat? Don’t miss a recipe! Sign up to have new posts delivered straight to your inbox and receive a FREE cookbook! 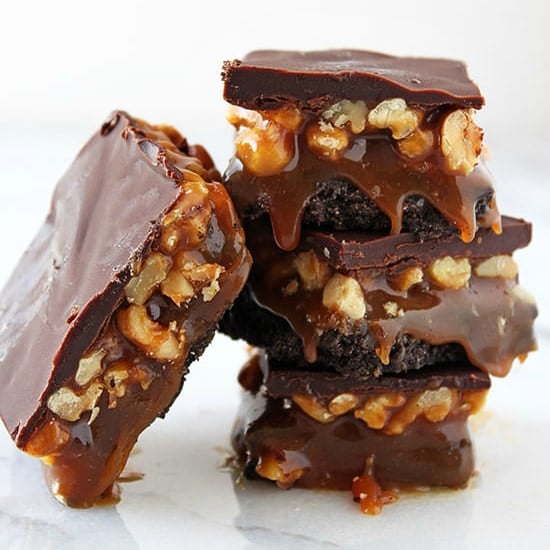 Oreo Caramel Walnut Bars are so rich and decadent with a layer of Oreo cookie crust, a layer of thick salted caramel and walnuts, all topped with chocolate. Dubbed "one of the best desserts ever!"