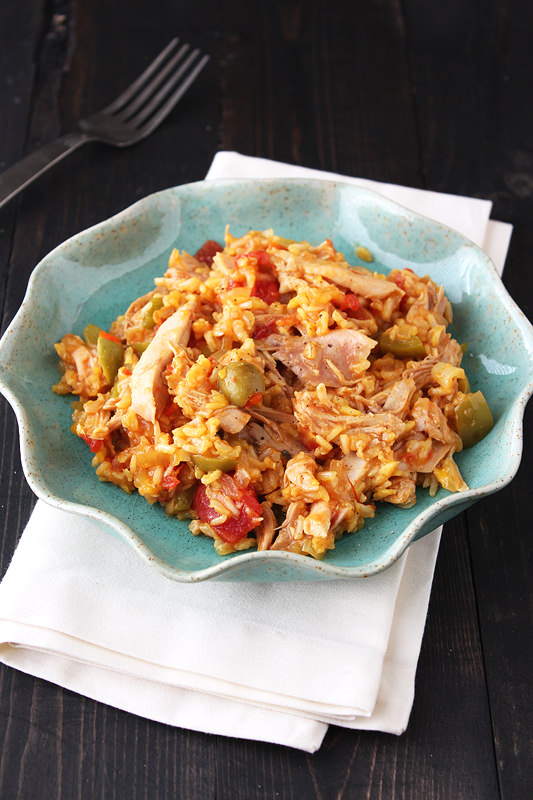 Taste: Pretty much just like Grandma’s! Or should I say Abuela’s? If you’ve never tasted arroz con pollo the flavors are actually pretty simple, just take a look at the basic ingredients. They all work well together and don’t worry, it’s not spicy! Unless you want it to be.
Texture: Usually my favorite part of arroz con pollo is the crunchy rice stuck to the bottom of the pot but since this recipe is made with brown rice, every bite of rice has a nice little crunch and chew about it. You can’t beat that when combined with shreds of meaty and tender chicken thighs.
Ease: Very easy! Just takes time to cook.
Pros: Easy, healthy, and delish.
Cons: Takes at least an hour.
Would I make this again? Absolutely, I grew up eating variations of this dish.

If you don’t know me very well than you’d probably be surprised to learn that despite my very fair complexion and blue eyes, I am half Dominican. My dad is Dominican, spent years of his childhood living there, and speaks Spanish fluently. Unfortunately I don’t speak Spanish, though I came pretty close after taking 4 years of Spanish in high school.

My dad’s mother has lived in the Dominican Republic mostly, but spent some time here in Arizona when I was younger. My grandma doesn’t really cook much and there’s a funny story about a time when the two of us tried to make a cake when I was a kid that turned out to be the most disgusting thing on the face of the planet. Something she does make, however, is a mean Arroz con Pollo. It’s always been one of my dad’s favorite dishes and he would always request she make a batch whenever possible. It’s simple enough to make and the leftovers taste even better. My grandma’s Arroz con Pollo was always very simple, though I’ve never really known the recipe because she doesn’t use one and she moved back to the D.R. by the time I started to become interested in cooking. Recently, though, I got to watch my dad’s childhood friend from the D.R. make Arroz con Pollo and I was inspired to make it myself. This particular recipe from America’s Test Kitchen is a little healthier as it’s made with brown rice but it tastes just as good. Also, I just had to add some saffron in it! If you want to cut the fat in this recipe even more, use skinless (and boneless, if you want) chicken thighs.

*Please note I am not claiming this is the only way or the right way to make Arroz con Pollo. I know every family makes it a little differently! This is how I like it and similar to how I grew up eating it.

How to make
Arroz con Pollo (Chicken with Rice)