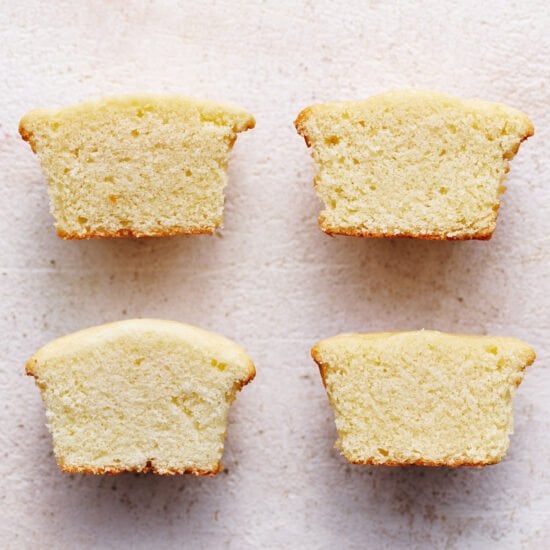 Filed Under: Baking Science | cake | Cakes & Cupcakes | How To

Diving into Cake Flour 101 - A fun visual guide to cake flour including what it is, how to substitute, and side-by-side comparisons so you can see how it works in action! 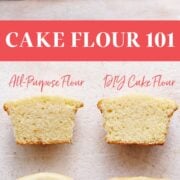 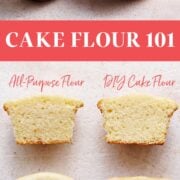 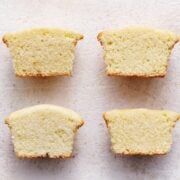 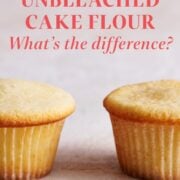 One of the questions I’m asked most frequently has something to do with the different kinds of baking flours on the market. What are they and why are they used for certain recipes?

Possibly the most important ‘specialty’ flour to understand is cake flour. 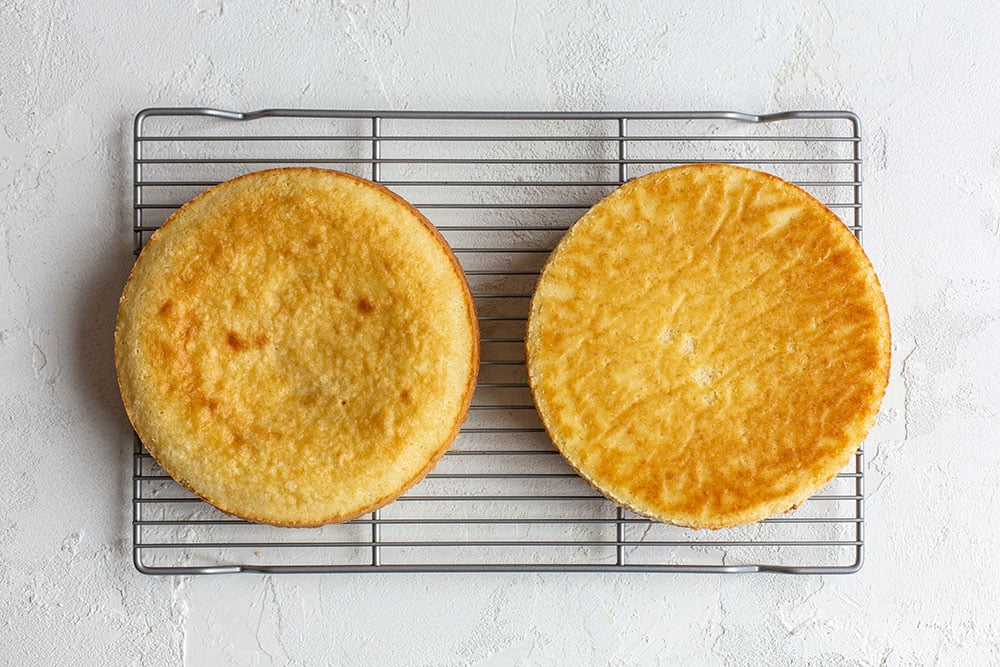 In fact, there are a couple recipes that I’ve made and some that I’ve published on the site that absolutely require cake flour. Using all-purpose flour instead will actually fundamentally damage the final result of the recipe. A good example of this is Angel Food Cake or even my Old Fashioned Sour Cream Doughnuts.

Why is this? What is cake flour and how does it work?

In order to answer these questions for you, I went crazy in the kitchen baking up multiple batches of cupcakes with the specific intent of creating visuals that illuminate the science of cake flour in an easy to understand way.

Don’t get me wrong, sometimes it pains me to intentionally make batches of anything that I know aren’t going to come out exactly right, but the photos are so valuable. They actually show you how different ingredients and techniques impact your favorite treats. Sometimes the differences are shocking!

Quick side note: check out the HTH Science of Baking Headquarters for lots more delicious and fascinating kitchen experiments.

I don’t know about you, but I’m such a visual person that the best way I can learn about the magic and science of baking is by seeing it in action.

So, I not only experimented with different brands (and styles) of cake flour, but also how cake flour substitutions work.

Let’s get into the cake flour experimenting…

I made every effort to replicate each batch as perfectly as possible, using the same exact tools and ingredients whenever applicable. I used a kitchen scale to measure ingredients to ensure 100% accuracy. Each batch was baked separately but in the same oven at the same temperature for exactly 20 minutes.

I used Bleached Gold Medal All-Purpose Flour for the control batch and DIY cake flour. The two brands of cake flour I tested were Swans Down Cake Flour, which is bleached, and King Arthur Cake Flour, which is unbleached. Lastly, I baked the batches in my Wilton Cupcake Pan, using a large spring-loaded scoop to fill each cavity evenly with batter.

All the cupcakes were baked on the same day to be photographed together. Before I reveal some of those photos, let’s cover the basics you need to know.

What is cake flour?

Cake flour is very finely milled from soft wheat from the heart of the wheat endosperm. This helps to give cake flour its very fine silky soft texture. That fineness is actually why cake flour should be sifted before use as it’s more likely to clump together.

What is the difference between cake flour and all-purpose flour?

The primary differences are that each flour is made from a different variety of wheat, milled to a different texture, and contain different amounts of protein vs. starch.

Cake flour has the lowest protein content of most flour products available:

This lower level of protein means cake flour also has more starch. Overall, the use of cake flour in a recipe will discourage gluten formation compared to a higher protein flour product. Lower levels of gluten equal more softness and tenderness in a baked good. Think of something that has a really high level of protein, like steak. It’s tough and chewy. When we want the opposite of that texture, we want lower levels of protein to a soft and delicate crumb.

By contrast, this is why bread flour has more protein than all-purpose flour and certainly more than cake flour. Breads require that extra protein to form strong gluten webs that shape the backbone of a loaf and create that slightly chewy, bready texture.

Is cake flour bleached or unbleached? (This is important!)

In the photos below, I actually tested Swans Down Bleached Cake Flour vs. King Arthur Unbleached Cake Flour to show you just how important this one detail can be! But before we get there, let me clear up some common misconceptions about bleached flour.

The bleached flour you buy at the supermarket does NOT contain chlorine in the final product. When flour products are chlorinated, manufacturers treat the flour with an extremely low level exposure to chlorine gas to provoke a chemical reaction. That chemical reaction not only changes the flour’s characteristics (more on that below) but it changes the chlorine itself. The chlorine turns into several other compounds: chlorite (which occurs naturally in unbleached flour), hypochlorous acid (found in our own immune cells), and chloride (an electrolyte found in a product like Smart Water). However, this is just one method of bleaching flour. You can learn more about flour bleaching here.

Bleached flour actually allows more moisture to be absorbed in a batter or dough to make dough less sticky and easier to handle. This can also help prevent excess spread in baked goods (think cookies). It improves the structure and height of cakes. It can make taller, sturdier breads. It also makes the flour more shelf stable and will not kill yeast.

There’s tons of sources on this in scientific publications, here’s one on the safety of consumption.

Are cake flour and pastry flour the same?

Let’s get into the experiments!

I had a suspicion of how this experiment would turn out, but I wanted to be 100% sure. I know many of us don’t always have cake flour in our pantries so it’s kind of an annoying ingredient when you see it called for in a recipe!

Yet because of all of the baking experiments I’ve done, I know one small, seemingly insignificant change can have drastic results in baking. 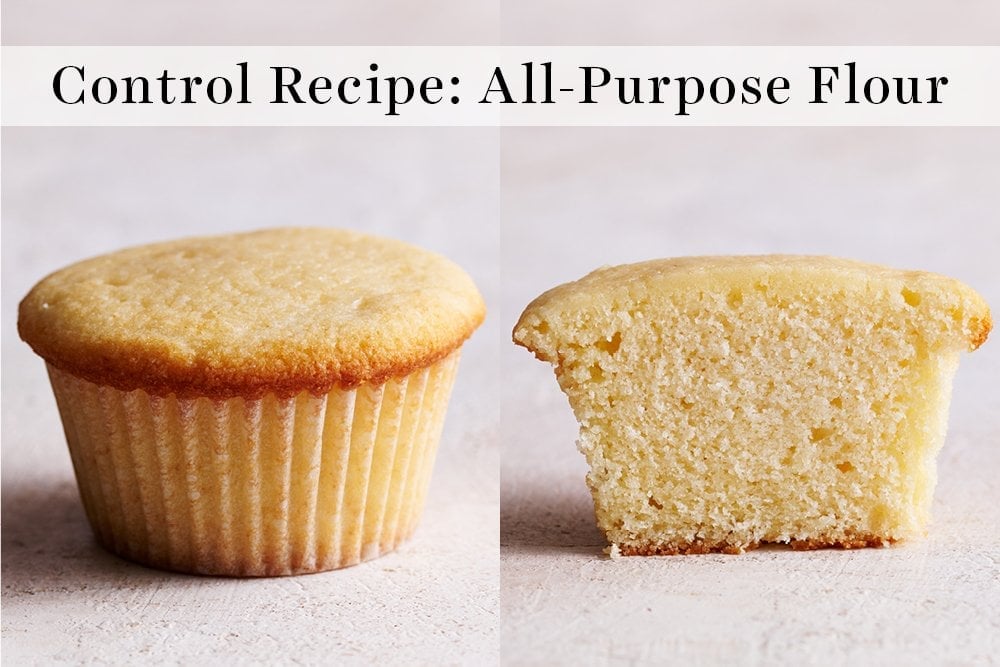 The cupcakes I baked were based on my standard cupcake recipe you can see at the bottom of this article. I re-made the same recipe each time, simply changing out the flour for each batch you see below.

These control cupcakes were soft yet sturdy with a slightly open crumb. They weren’t super tall and had some cracking on top that I think visually reflects the slight chewiness they had. Basic yet delicious and full of vanilla flavor. 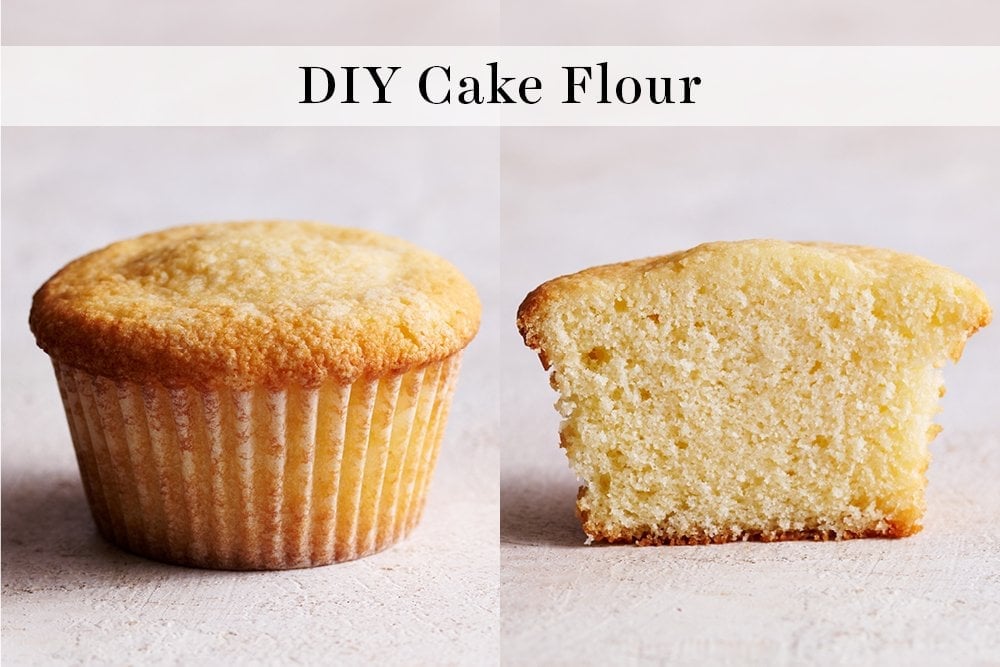 Using the DIY cake flour technique just below, these cupcakes turned out visually more like the control / all-purpose flour cupcakes than the cake flour cupcakes. Their texture was another story. These were more crumbly and had an almost gritty texture which I’m attributing to the cornstarch. They almost felt like they dissolved in your mouth, which honestly, I didn’t care for. I won’t be using DIY cake flour in my baking… even if it’s a total pain to run to the store to grab cake flour! 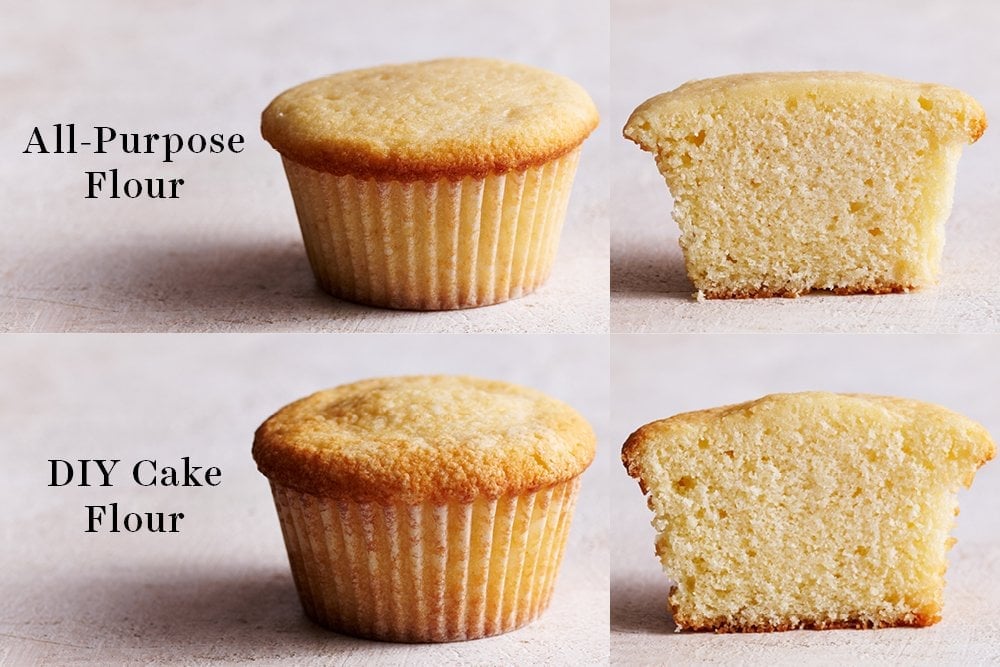 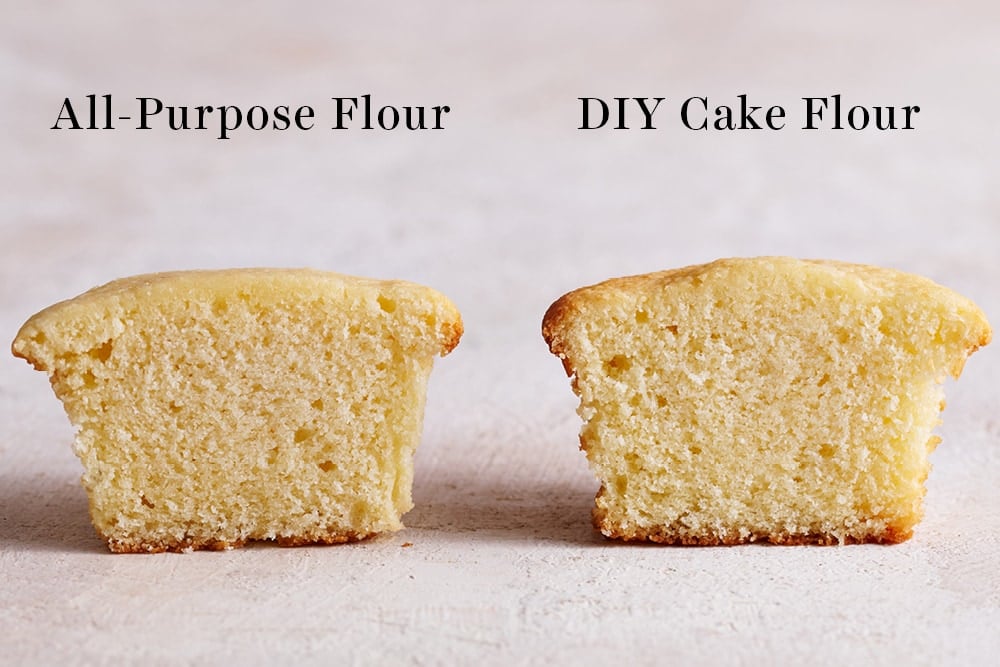 How to Make DIY Cake Flour

Although I would NOT recommend using DIY cake flour based on our experiment results, here’s how I did so:

Then I sifted this flour + cornstarch mixture 5 times with a fine mesh strainer.

Comparing Brands of Cake Flour: Which is the Best? 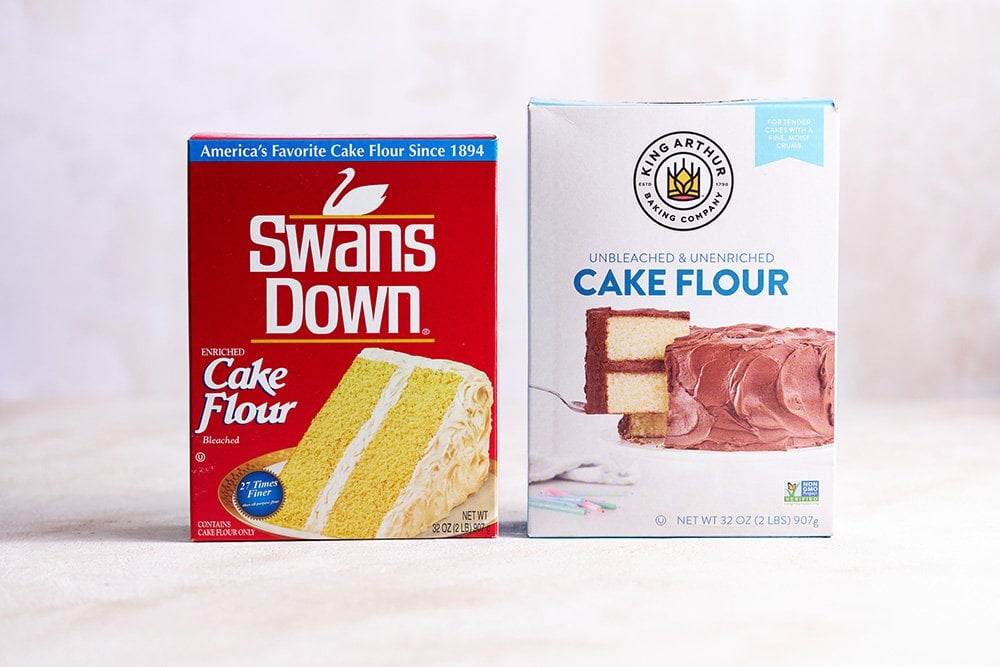 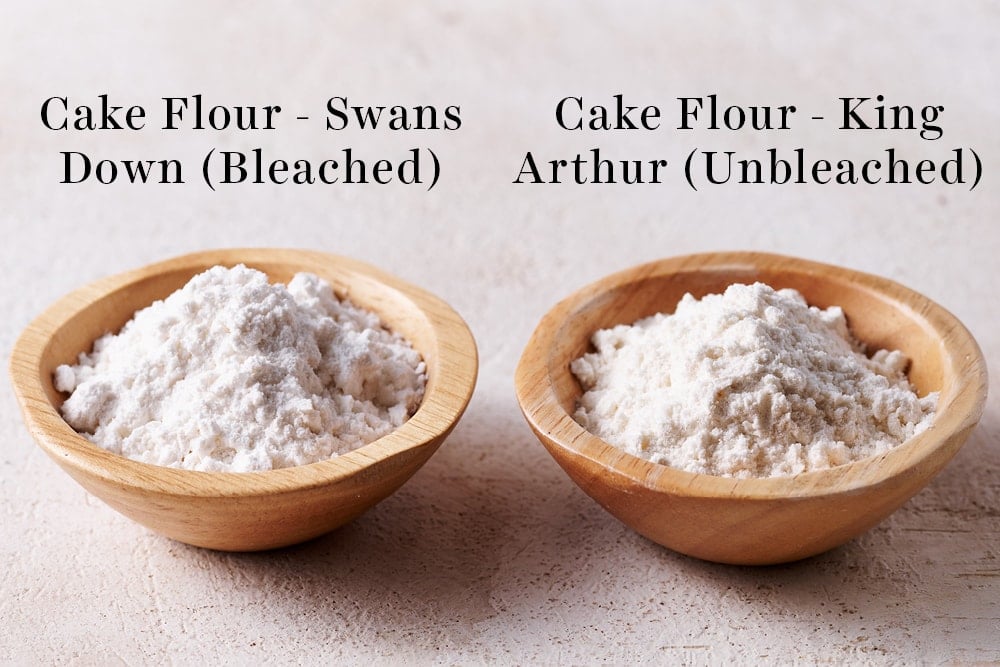 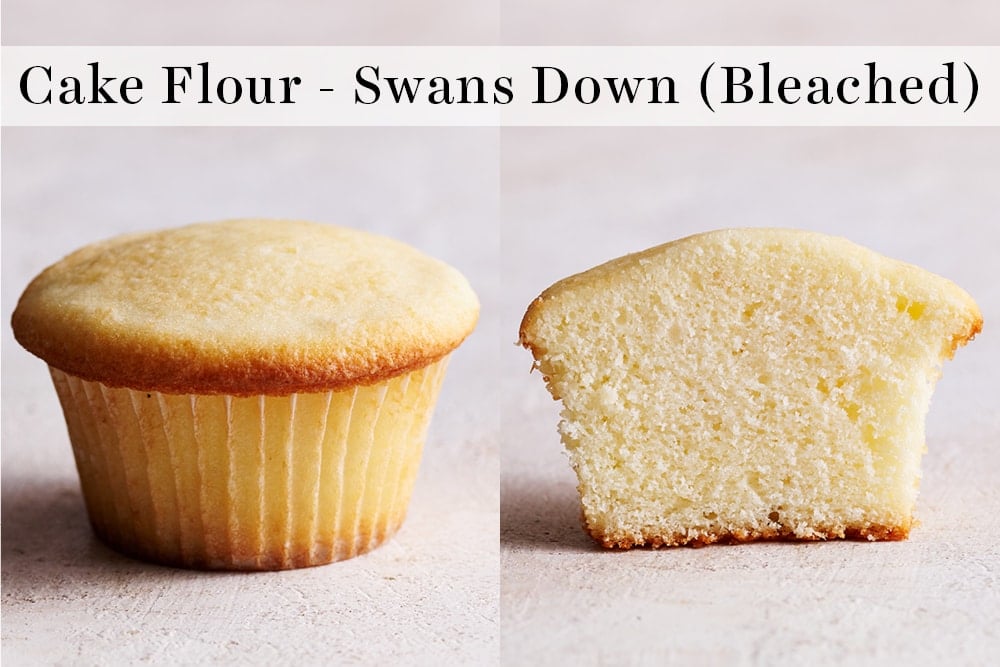 I used the same amount of Swans Down Cake Flour in place of the all-purpose flour in this batch. These cupcakes baked up pale and tall with a spongier and softer texture. The softness actually reminded me slightly of a more commercially produced cupcake but not necessarily in a negative way. They were much more soft and delicate that I don’t actually think they’d hold up well to a heavy or generous frosting or filling. They also had slightly less vanilla flavor than the all-purpose flour cupcakes.

For me, I tend to prefer cupcakes made with all-purpose flour instead of cake flour. However, for some recipes like Angel Food Cake or certain layer cakes, cake flour really helps to create that fine and delicate crumb characteristic of that style of recipe. In those cases, it really shouldn’t be substituted! 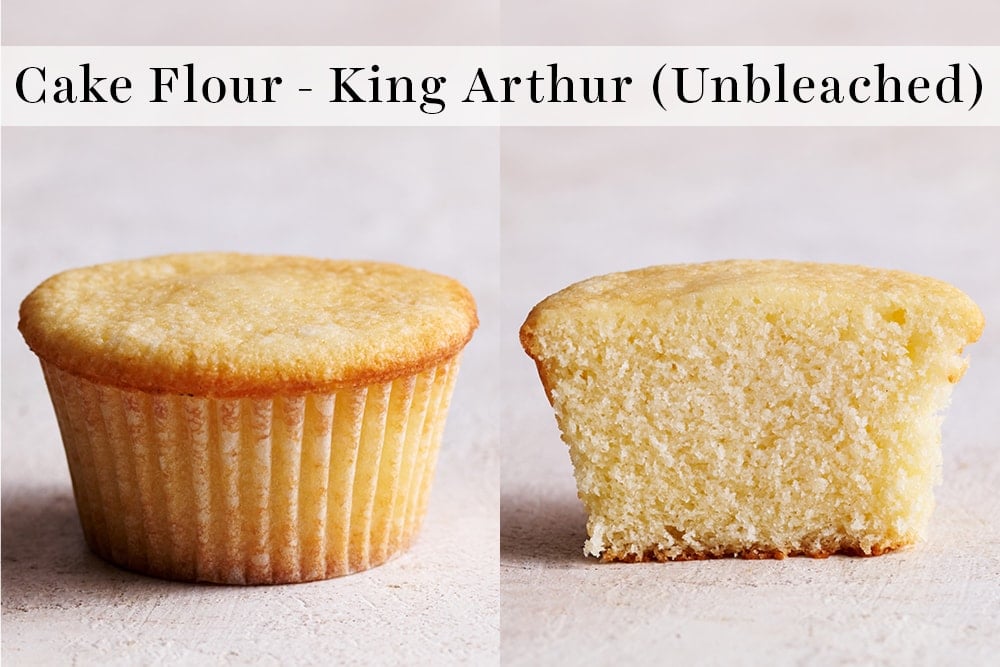 I was SO excited to see the comparison between the Swans Down and King Arthur Flour cupcakes to see what impact bleaching had on the final result, among other variances between the two brands. 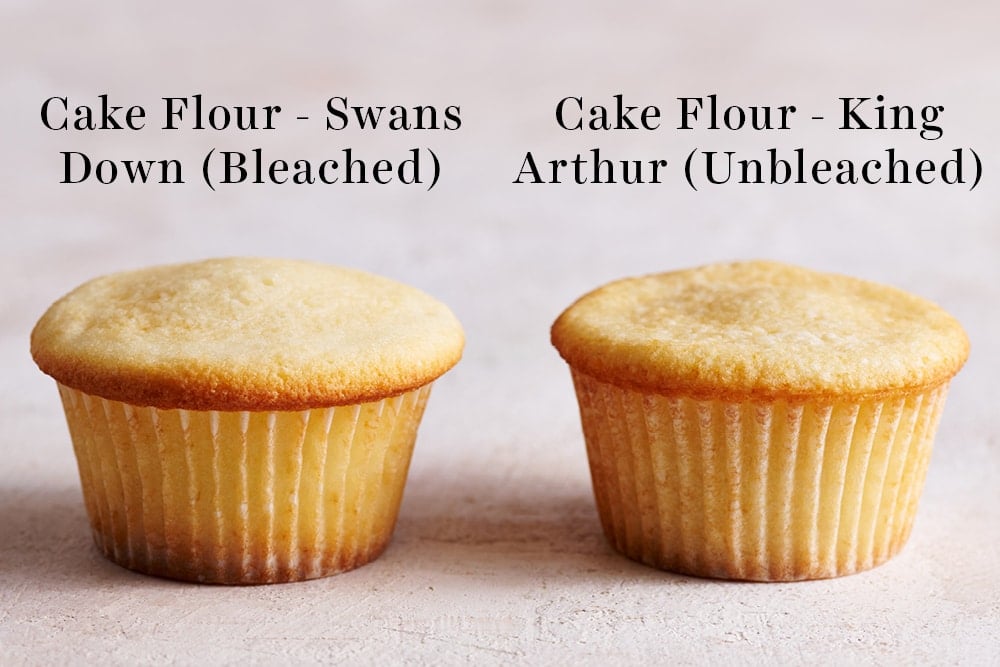 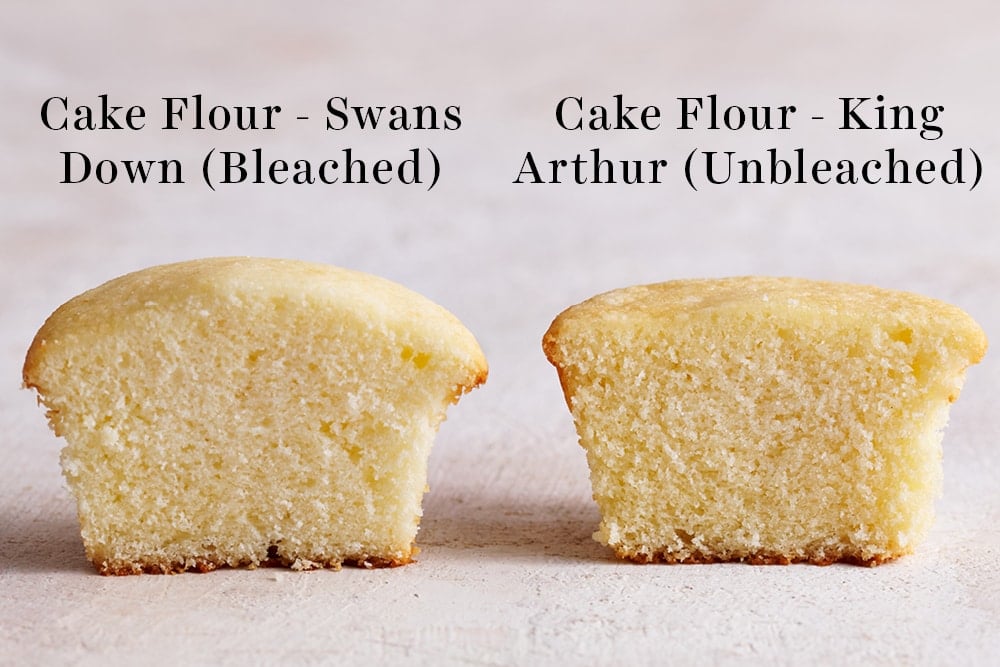 Although I love King Arthur as a brand, their cupcakes were noticeably less flavorful than the all-purpose cupcakes. Compared to the Swans Down cupcakes, the King Arthur cupcakes had an almost corn bread texture. I’ll be sticking with Swans Down when I need to use cake flour. 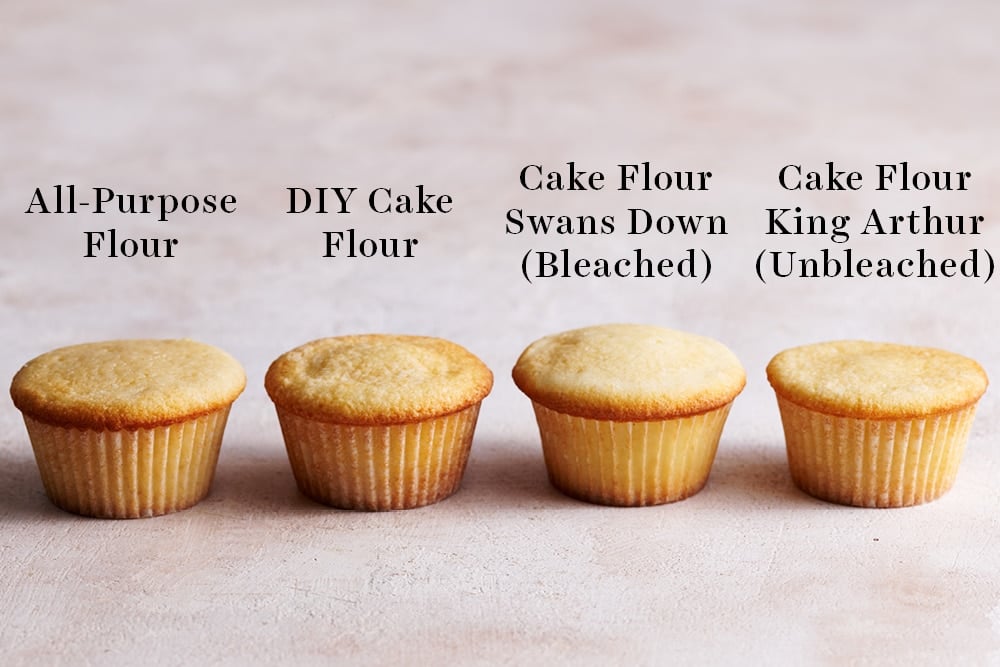 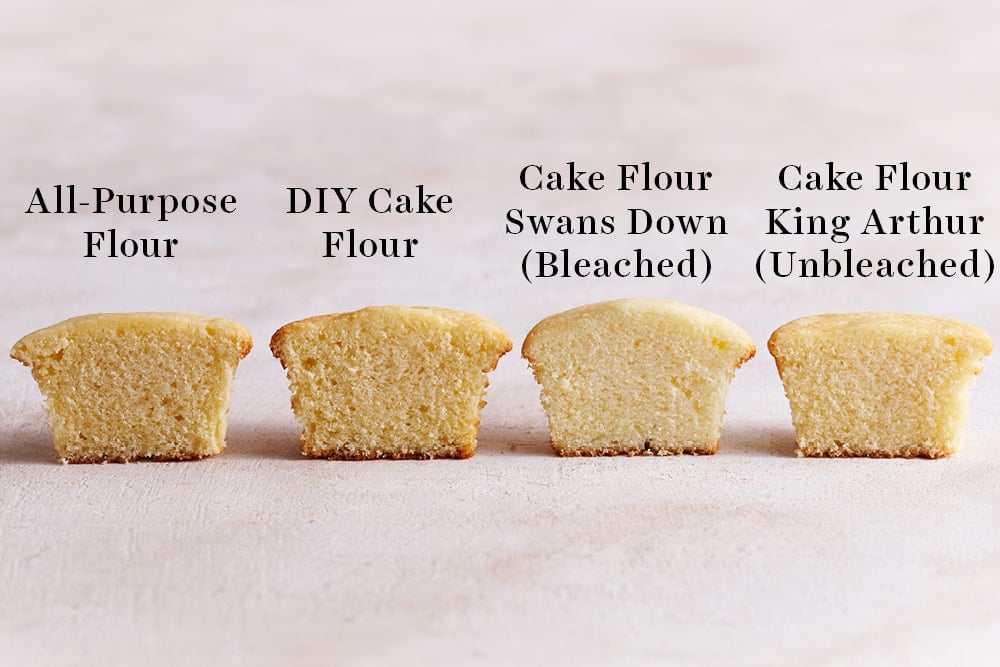 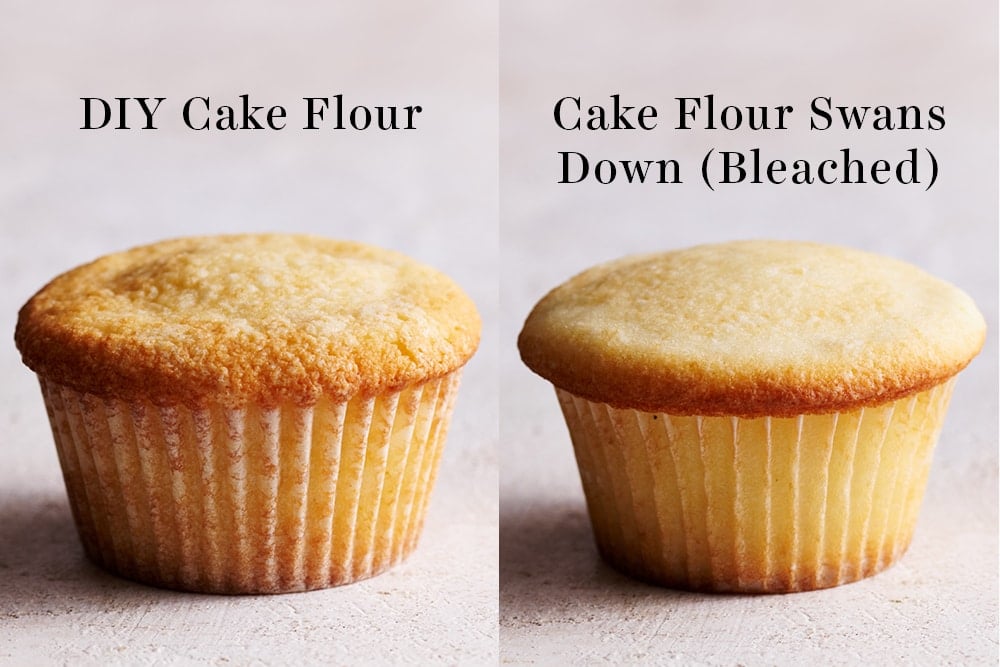 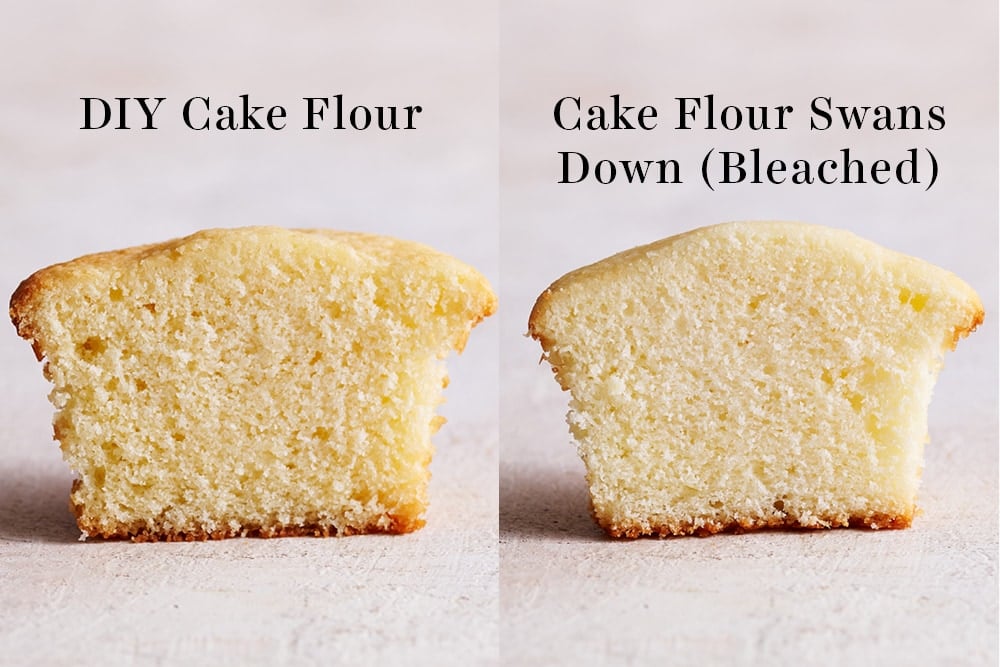 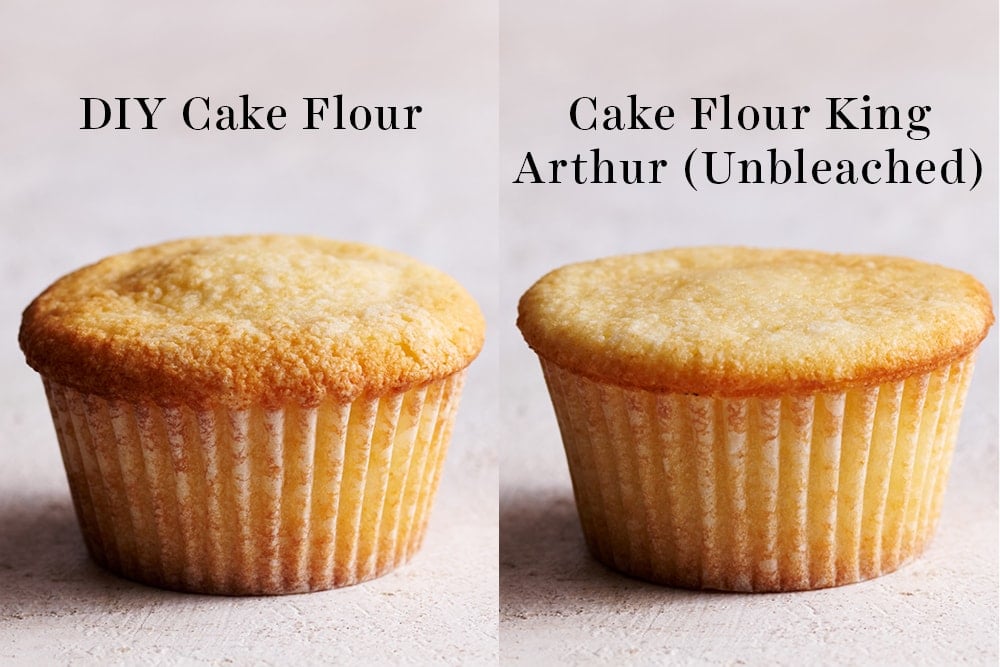 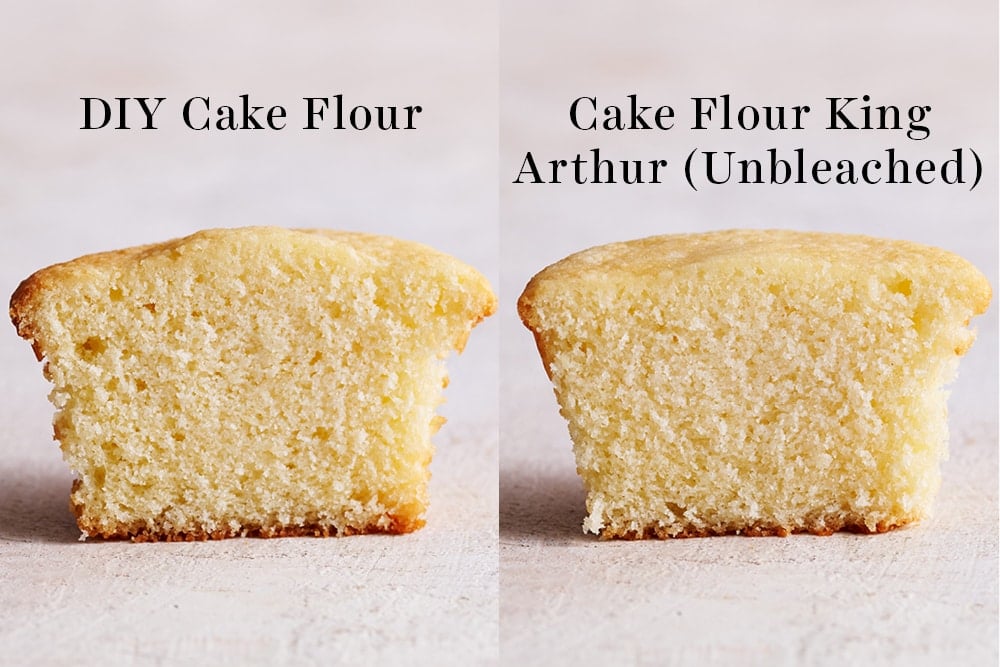 I think visually, these comparisons do a good job of proving the belief I’ve always held that nothing is quite as good as the real thing.

So the final question is…

Can Cake Flour be Substituted?

It shouldn’t be. Recipes that use cake flour are typically more delicate and finicky and require the exact ingredients called for.

In fact, 90% of substitutions you make in baking will alter the taste and texture of the final result. Sometimes substitutions are necessary, and I understand that. However, the Handle the Heat method of baking recommends that you always follow the recipe exactly as it’s written… at least the very first time you make it so you understand how it’s supposed to turn out. Then you can experiment with substitutions and alternatives.

Luckily, since cake flour is refined and bleached, it will keep in your pantry for a long time. If stored in a cool and consistently dry and airtight place, it should last at least 6 months if not up to a year. So why not have some on hand for those few recipes that use it so you can really take your baking to that next level?

Recipes that Use Cake Flour:

How to make
Control Cupcakes 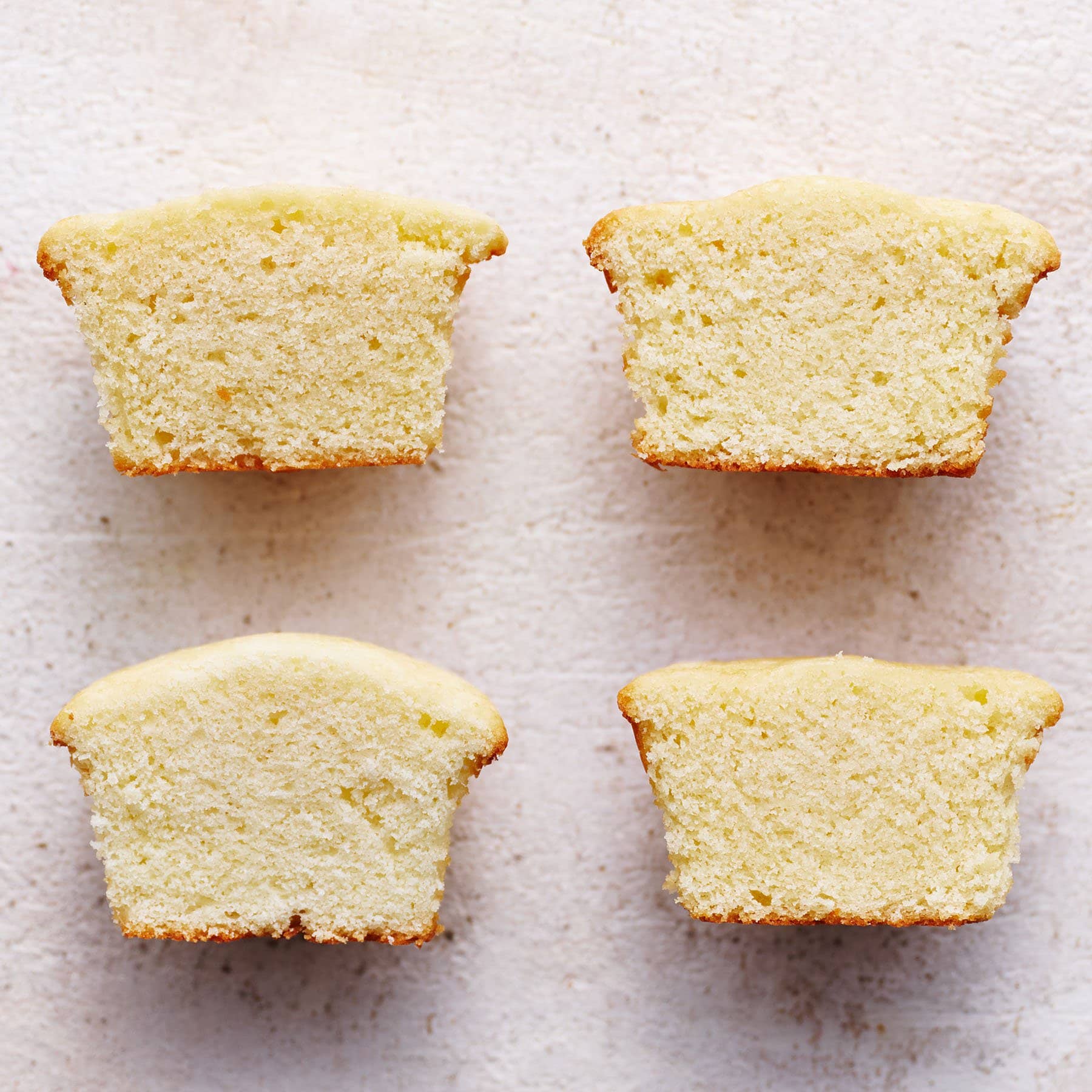 Diving into Cake Flour 101 - A fun visual guide to cake flour including what it is, how to substitute, and side-by-side comparisons so you can see how it works in action!