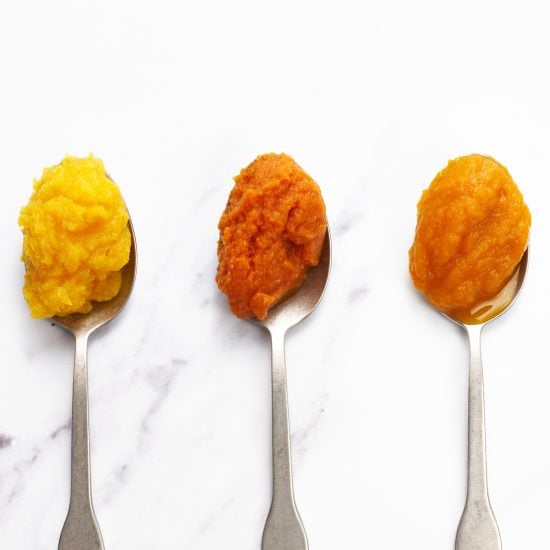 Filed Under: Fall | Homemade | How To | Videos

Fresh vs. Canned Pumpkin, which is best? Testing fresh pumpkin puree, regular canned pumpkin, and organic canned pumpkin to find out! Plus a how-to video. 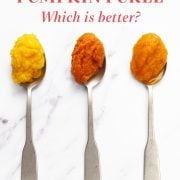 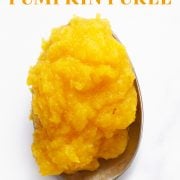 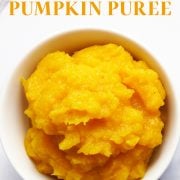 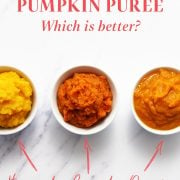 I started blogging in 2009 (!) and since then have published over 1,000 recipes, as well as written two cookbooks. Over the years I’ve learned one thing for certain: baking is a SCIENCE!

Which is why I now dedicate so much time and energy into publicizing fun experiments like this one to show you how small changes can sometimes make a big difference in the final result of your baked goods.

What is Pumpkin Puree?

It is the roasted and blended flesh of the pumpkin, with the skin and seeds removed. Fresh pumpkin puree will be a very different color, texture, and flavor, compared to canned pumpkin. See our comparison and experiment results further below!

How to Make Pumpkin Puree

Before we get into the fresh vs. canned pumpkin nitty gritty, be sure to check out this step-by-step video and my easy recipe for making your own pumpkin puree. It’s surprisingly simple! 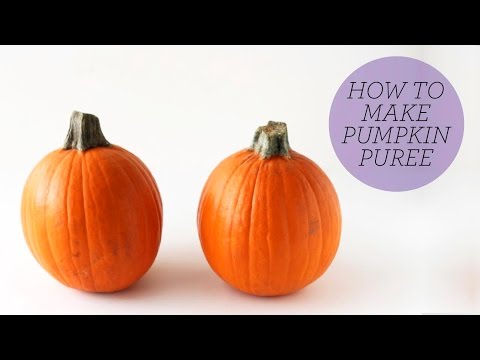 The full fresh pumpkin puree recipe is in the printable recipe card below, but the steps are straightforward:

Which Kind of Pumpkin Should I Use for Cooking and Baking?

If you attempted to make homemade pumpkin puree from a regular field pumpkin that you would use to carve a jack-o-lantern for Halloween, the result would be stringy, watery, and bland. Instead, use pie pumpkins or sugar pumpkins for the best flavor and texture in any sweet or savory recipe.

What to do with Pumpkin Seeds?

The full detailed instructions for roasting are also included in the printable recipe card.

Use or store in the fridge in an airtight container for up to a week, or in the freezer for 6 to 8 months. This applies to both leftover canned puree and homemade fresh pumpkin puree.

As you can see from just a quick visual assessment, there is a BIG difference in color and even in texture between these three purees. What you can’t see is there were also slight differences in the flavor.

The fresh is notably the lightest in color; it almost just looks like any ol’ pureed squash. The organic is the second darkest, while the regular canned stuff is practically a completely different color.

Why is Libby’s Canned Pumpkin so Dark in Color?

A quick Google search revealed that Libby’s uses a proprietary variant of the Dickinson pumpkin, which actually looks more like a butternut squash than a pumpkin. The claim is that these pumpkins have been grown specifically for pumpkin puree in cooking and baking, so the result is a sweeter and creamier product. Interesting.

Of course, anything that’s been canned will likely taste different than the fresh product. 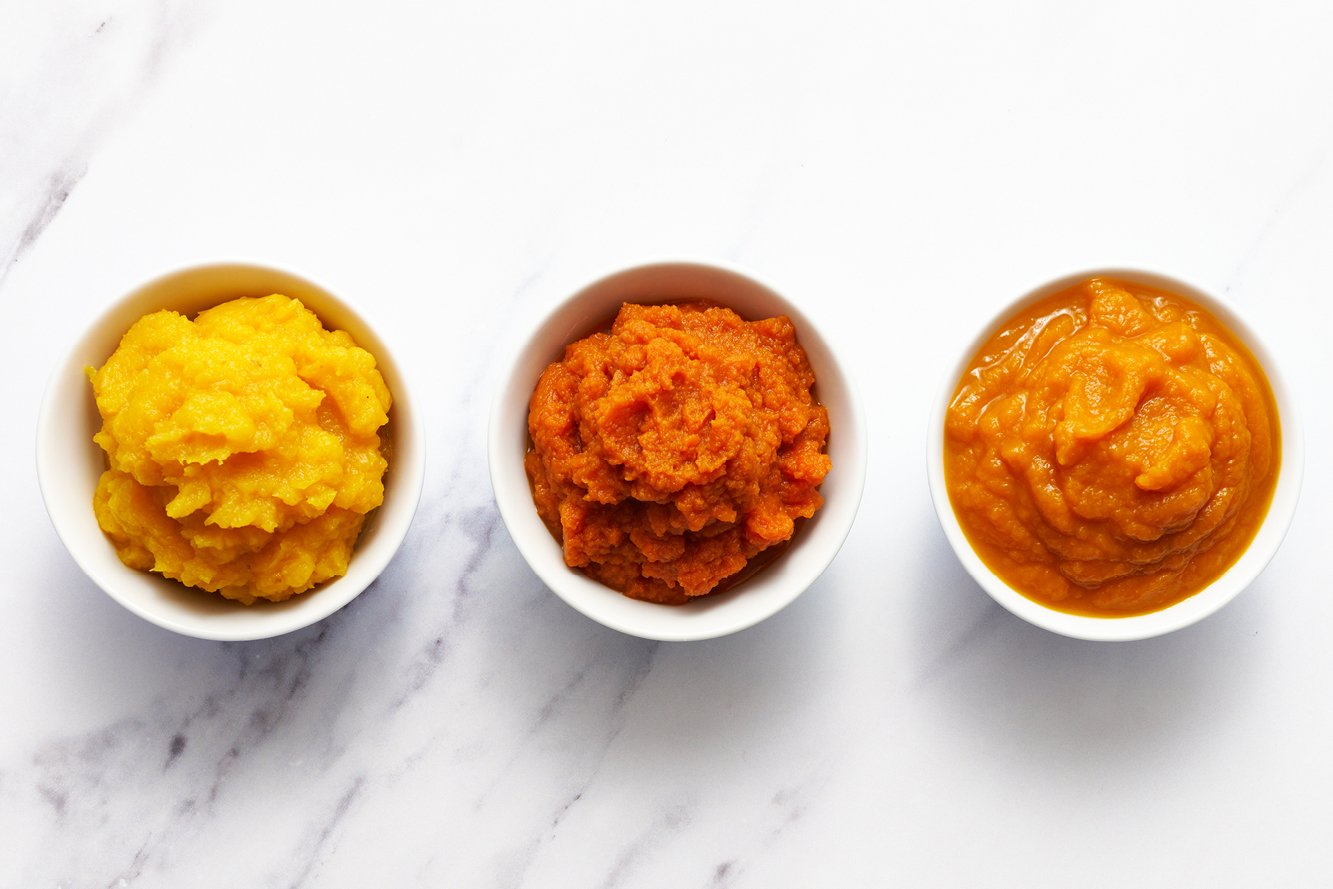 For baking recipes where you really don’t want excess water content, such as a Pumpkin Cheesecake or chewy cookies, you may want to avoid using organic canned pumpkin puree. The extra liquid could throw off the texture of the recipe! 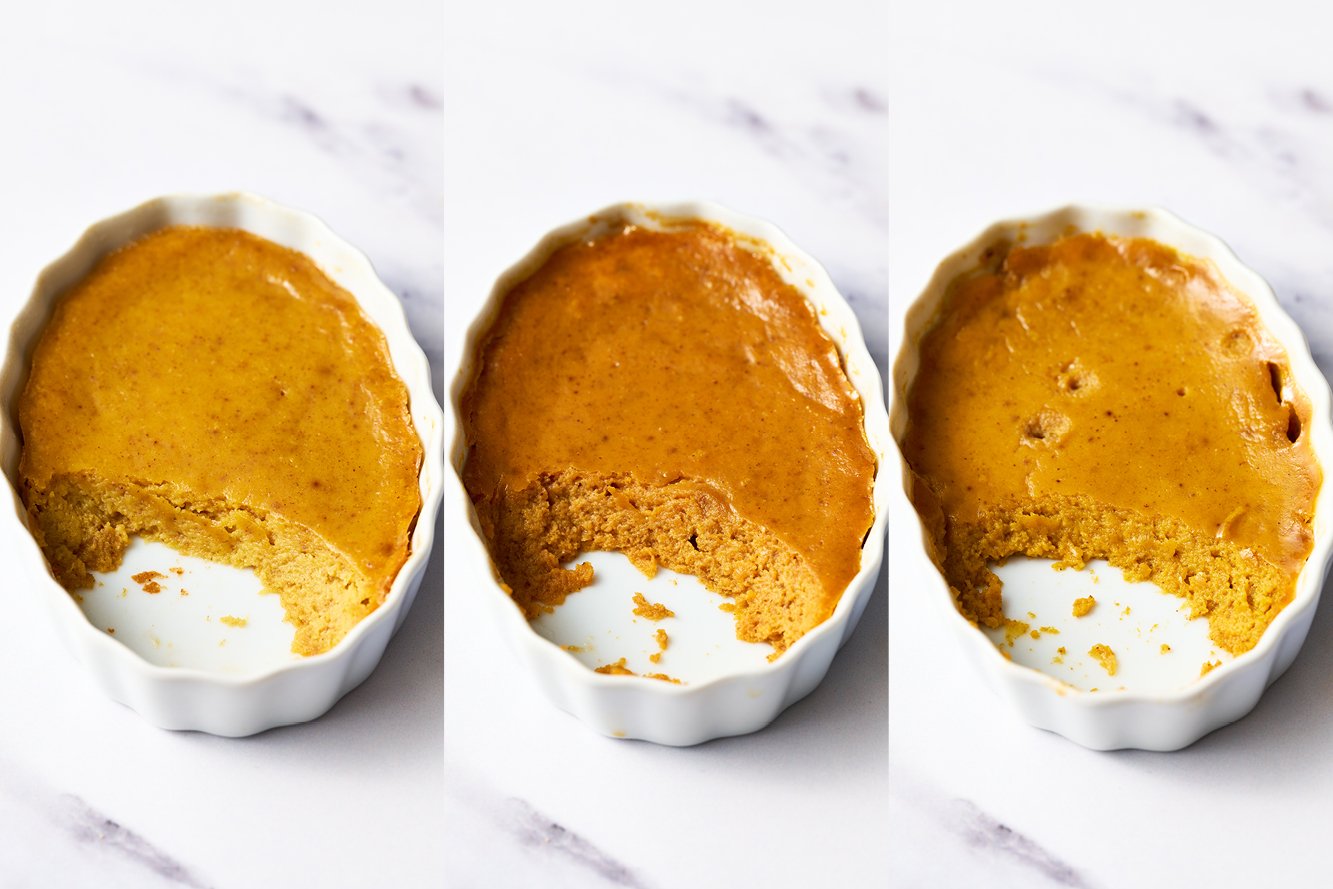 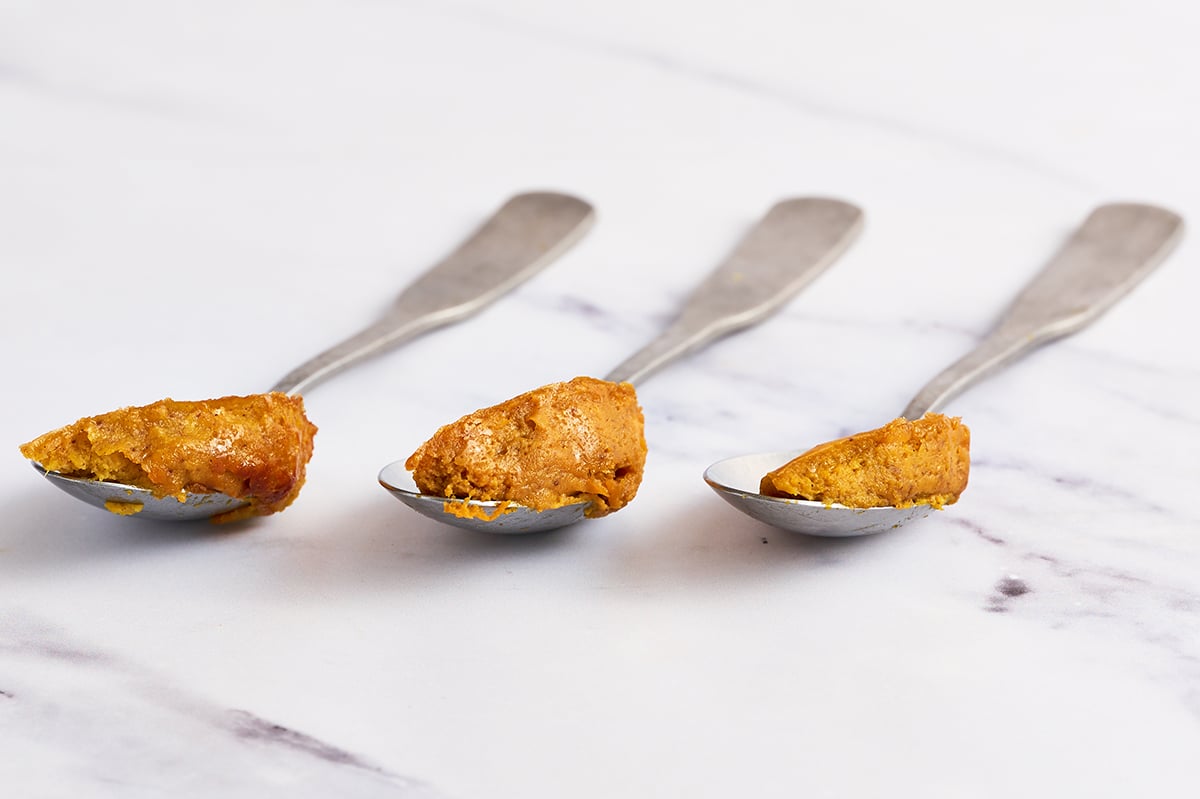 Since in most pumpkin baking we add tons of sugar and spices, I realized the texture was as important, if not more so, than the taste. In fact, pure pumpkin puree kind of just tastes like straight up baby food.

Once baked into mini pumpkin pies (following the standard recipe from Libby’s), the color differences among the purees became less obvious.

After adding enough sugar and spices to disguise the original pumpkin flavor, it was all about the texture. The regular canned was definitely the firmest, the organic canned was most watery, and the fresh puree was the lightest and most velvety.

It’s VERY important to never confuse these two cans. Canned pumpkin should contain the puree only. It’s one ingredient. Pumpkin pie filling, on the other hand, will contain sugar and spices. Unless the recipe you’re following specifically calls for pumpkin pie filling, avoid purchasing it to avoid the possibility of a mix up in the kitchen.

So, Which Pumpkin Puree is Best?

Well, this is a tough question because each puree had good qualities. I think it depends on the use and your personal preference.

Based on my taste tests, I think that fresh puree would easily elevate any savory pumpkin dish such as soup or pasta. The fresh, unadulterated flavor and fluffy texture would work wonderfully in savory dishes, especially because even “sugar pumpkins” aren’t very sweet on their own. While testing, everyone at the studio enjoyed the taste of the fresh puree.

When it comes to baking, I think you’d be fine using either canned or fresh. I’ll always keep a few cans of regular pumpkin puree in my pantry because I love to bake with the stuff. It’s certainly significantly easier!

I think I will stay away from organic canned pumpkin, because that excess water content can really mess with so many recipes.

Which is your favorite? What will you try next time you’re baking or cooking with pumpkin?

How to make
Homemade Pumpkin Puree 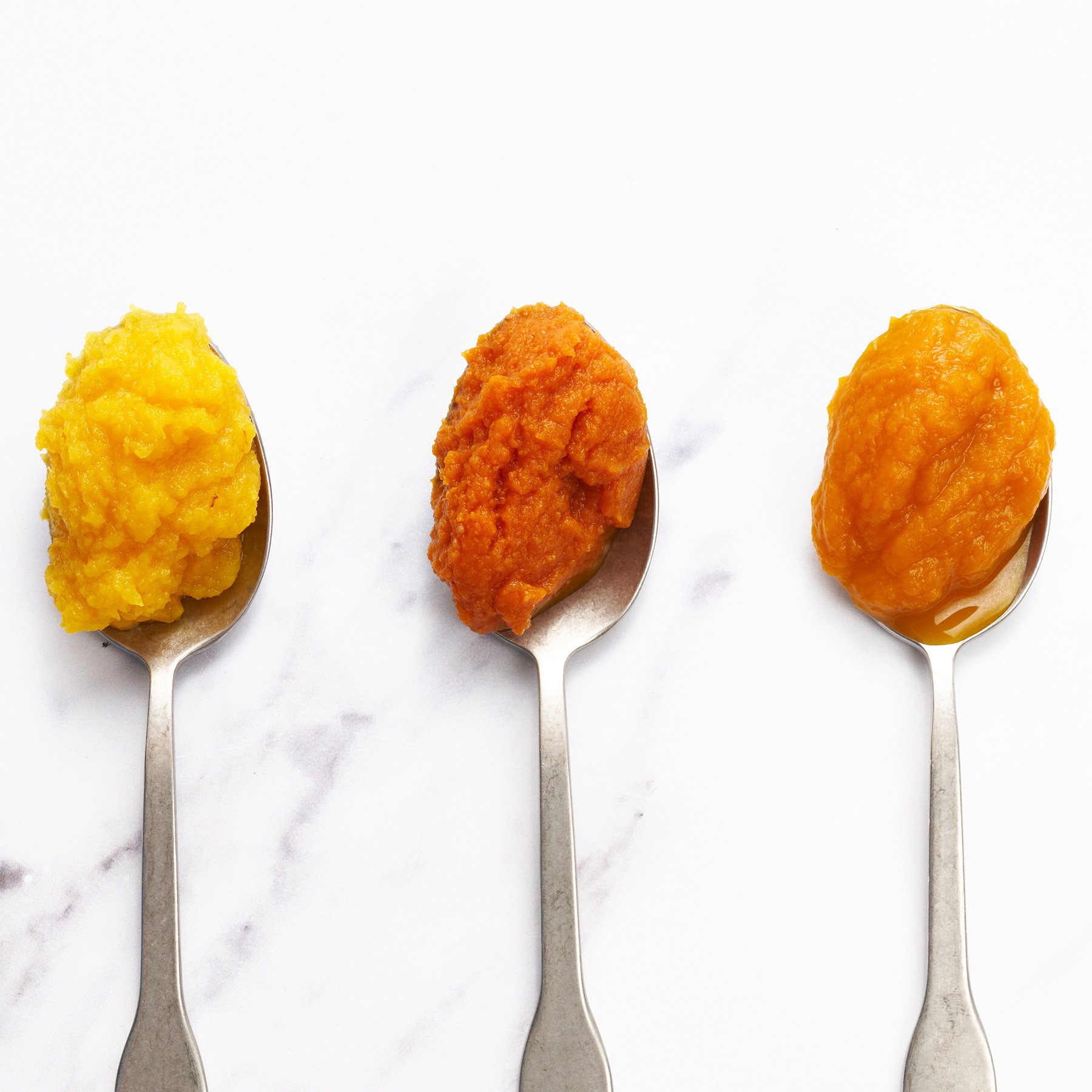 Fresh vs. Canned Pumpkin, which is best? Testing fresh pumpkin puree, regular canned pumpkin, and organic canned pumpkin to find out! Plus a how-to video.

To Roast the Seeds:

This article was originally published in 2014 and updated in 2022. Photos by Joanie Simon.