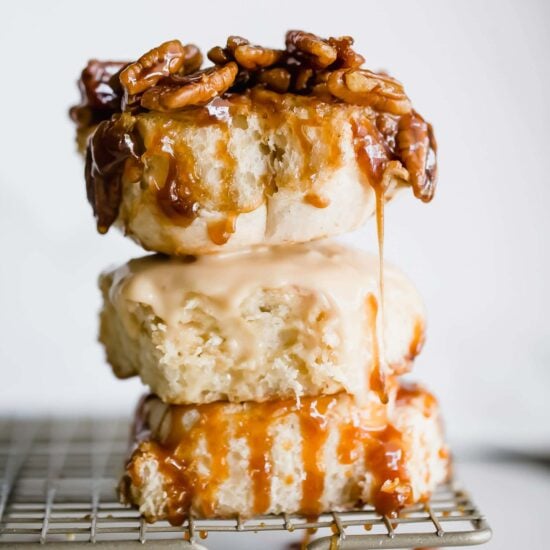 These 3 Easy Cinnamon Roll recipes including caramel apple, banana bread, and sticky pecan are perfect for fall and surprisingly simple to make from scratch! 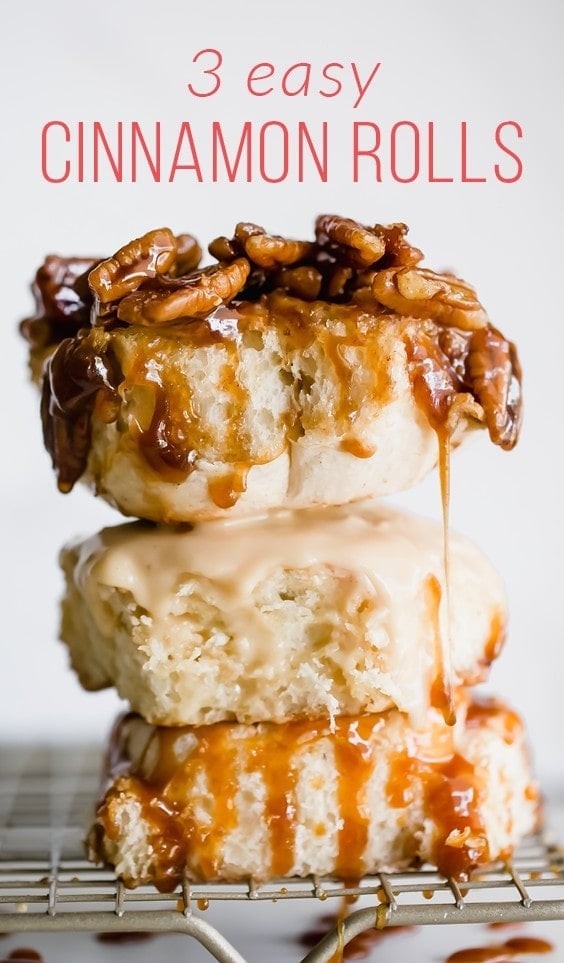 This post is sponsored by Red Star Yeast. All opinions provided are my own. Thanks for supporting me in working with brands I love, to bring you new recipes.

The aroma of cinnamon rolls baking away in the oven is one of the more delightful and enjoyable small pleasures I can think of.

Especially on one of the first chilly days of the season. 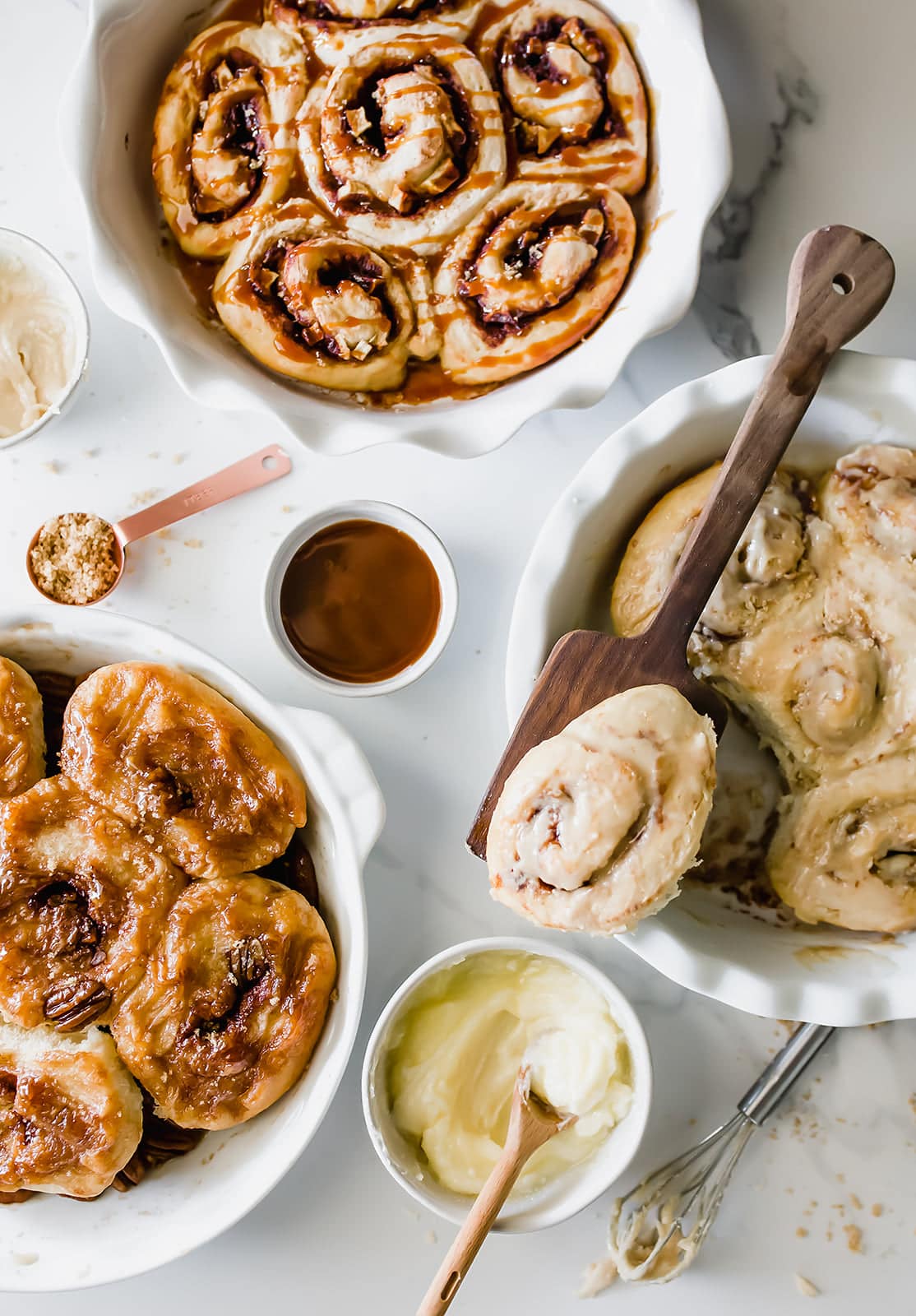 So today I’ve partnered up with Red Star Yeast, my go-to brand of baking yeast, to bring you 3 fun & simple flavor variations for cinnamon rolls. I’ve also included a step-by-step video with tons of tips & tricks!

All three recipes are listed in individual boxes at the bottom of this post! 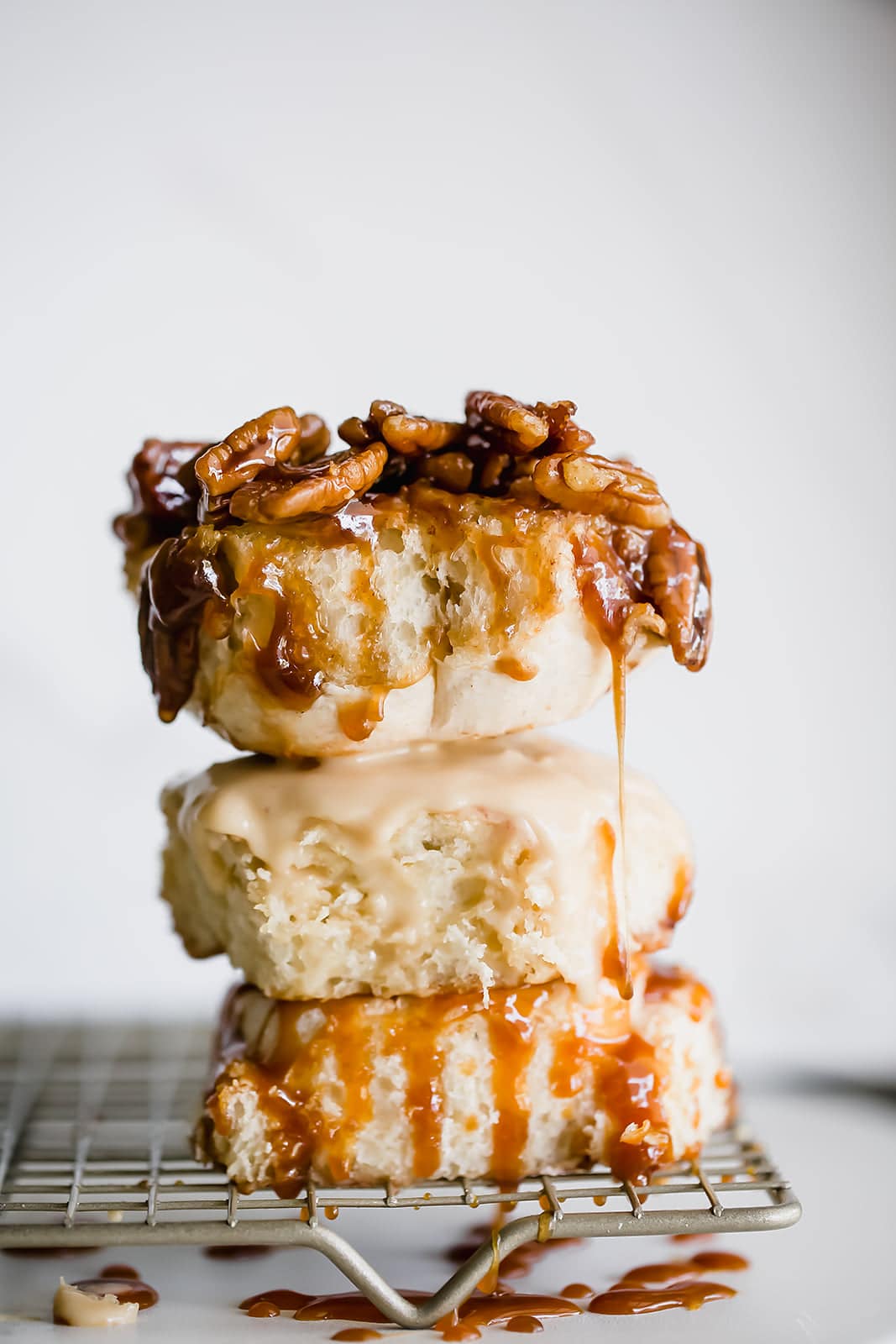 I’m using the same basic base for each flavor: my Ultimate Simple Dough recipe!

You can actually use this dough to make anything from dinner rolls to pizza and sandwich bread, but they’re also perfect for cinnamon rolls of any kind!

If you’re intimidated by baking with yeast dough, don’t be. This Ultimate Simple Dough recipe was designed to be as foolproof as possible! Especially if you make it with Red Star’s Platinum Yeast, which is so easy to use. It actually strengthens and improves your dough to create super fluffy rolls!

There are even more tips for making homemade dough in that recipe post, so be sure to check it out.

Each filling varies slightly depending on the flavor you’re following. But what I’ve found is that the more butter + cinnamon the better! That makes for the most gooey and flavorful rolls possible. But feel free to get creative experimenting with the filling. As opposed to the base dough, the filling is a little more forgiving!

To get started, make a batch of that Ultimate Simple Dough and let it rise once.

After you assemble and shape the rolls, cover them and let them rise again for 30 minutes to 1 hour. The time required will depend in part on the temperature and humidity of your kitchen.

Cinnamon rolls are best served fresh and still warm from the oven. You can get away with storing them for a day, covered at room temperature, then re-warming them before serving.

If you want to prepare the rolls ahead of time to bake off in the morning, here are the directions:

Refrigerate assembled and shaped rolls after they have risen for 20 minutes. Cover the rolls tightly with plastic wrap and refrigerate for up to 24 hours or freeze for up to 2 months. If freezing, allow to thaw in the fridge overnight.

Loosen the plastic wrap and allow to finish rising and lose its chill at room temperature until an indentation made with your finger into the dough remains. Preheat the oven during this period then bake as directed.

Serve the banana bread and caramel apple rolls warm or at room temperature. The sticky pecan rolls must be served warm or the pecan topping begins to harden. Let the pecan rolls stand for 2 to 3 minutes after baking before placing a tray or serving plate upside down onto pan. With oven mitts on, carefully turn tray and pan over. The pan will be hot!! Let pan remain 1 minute so caramel can drizzle over rolls before pulling the pan away. 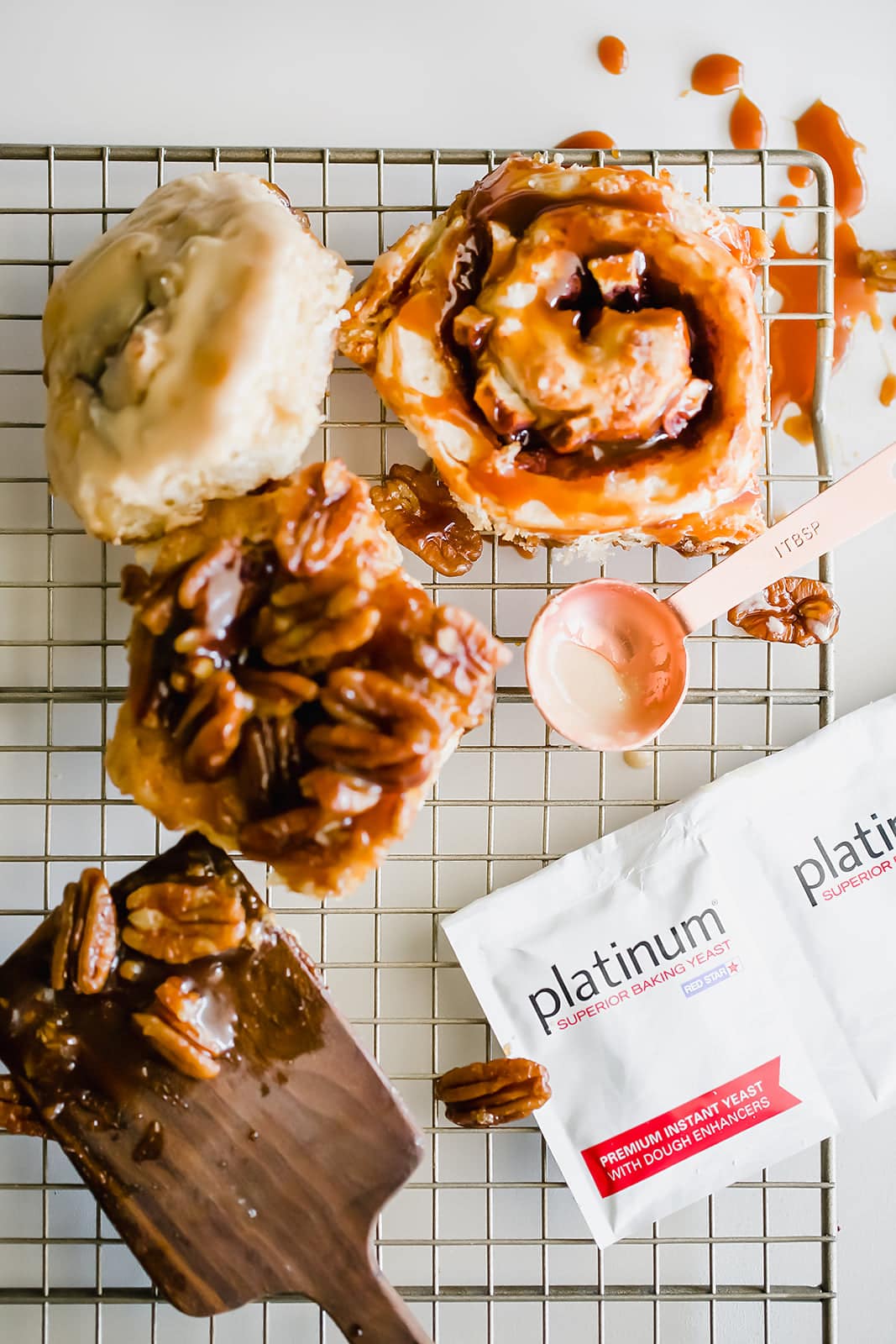 These rolls were the recipe selection for the 2018 September Baking Challenge! Learn more here about our monthly challenges here. Take a peek at the community entries from September:

How to make
Caramel Apple Rolls 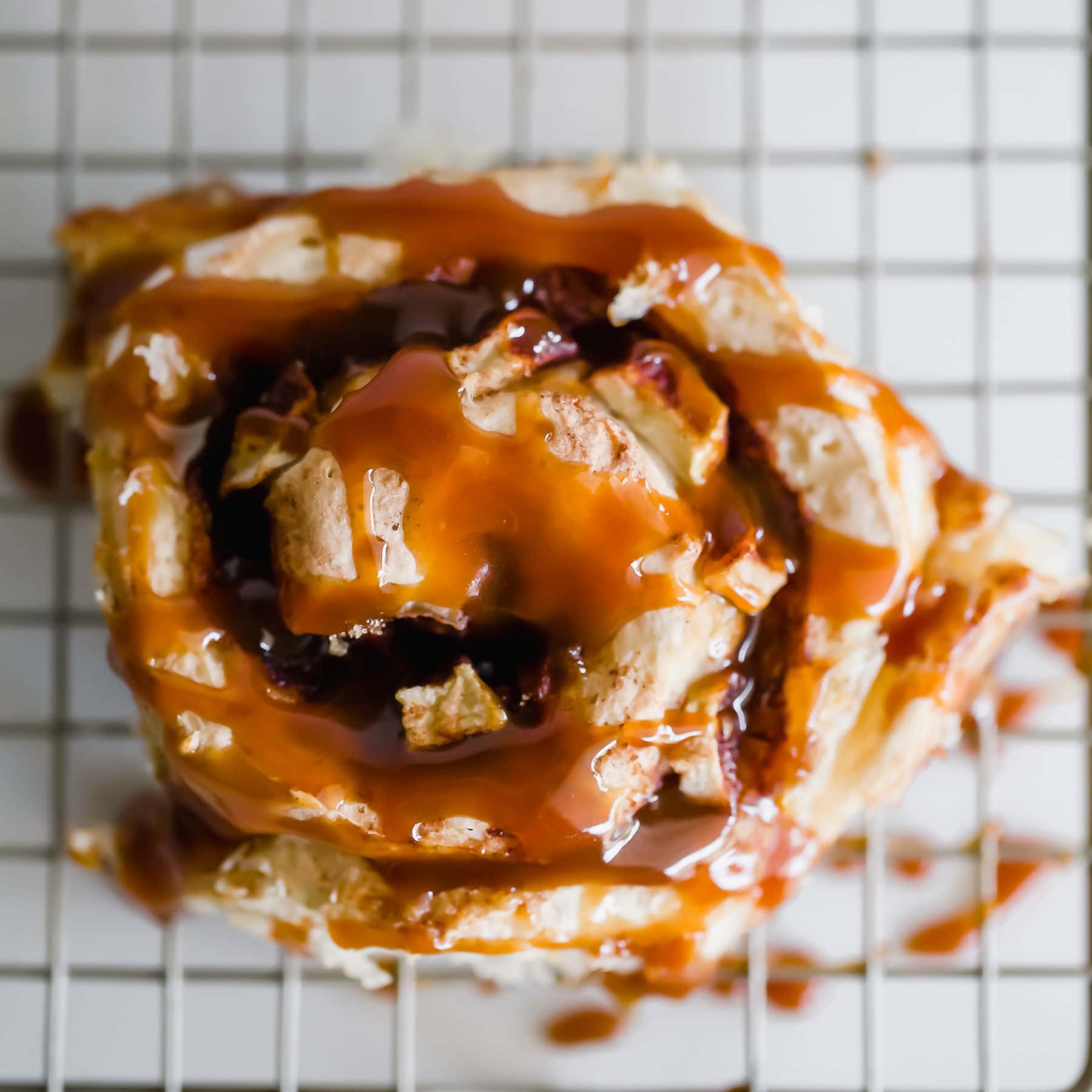 How to make
Sticky Pecan Rolls 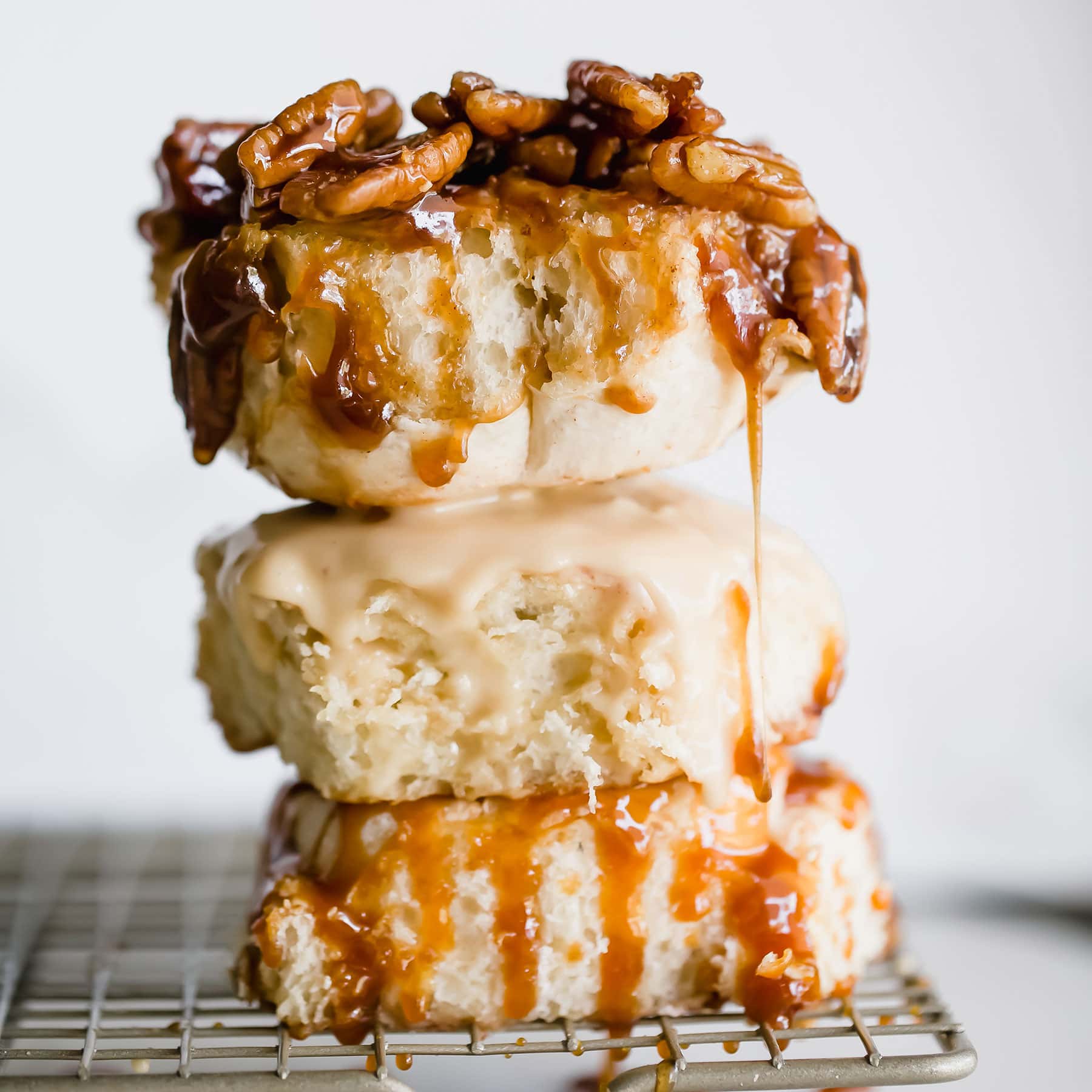 For the sticky caramel topping: