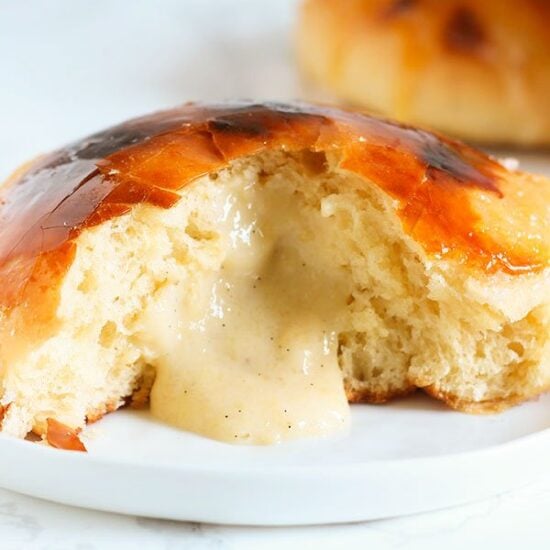 Baked Creme Brulee Doughnuts feature a baked yeast risen doughnut base filled with vanilla bean pastry cream and finished off with a shatteringly crunchy bruleed sugar coating. To die for!

Taste: Tons of sweet vanilla flavor paired with caramelized sugar... pure decadence! Texture: The doughnut is surprisingly light, fluffy, and browned for being baked. The ultra rich and creamy filling contrasted by the shatteringly thin and crunchy sugar topping is just perfect. Ease: Definitely not an easy recipe, but at least there's no deep frying involved. Pastry cream can be a pain, so just be sure to follow the direction carefully. Appearance: Ultra gourmet. Pros: Doughnuts taken to a whole new level. Cons: A more advanced recipe. Would I make this again? Mmmhmm. 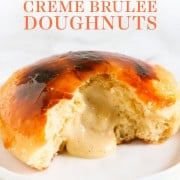 This past March I spent three weeks visiting family in Melbourne, Australia. I actually lived there and went to primary school there for a year as a girl! 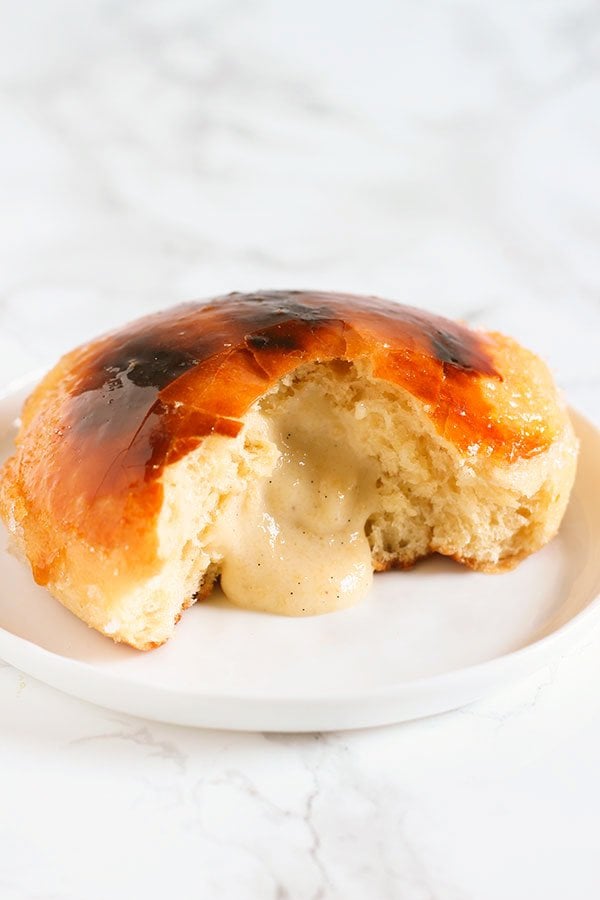 My mom grew up in Australia, so it was amazing to see her country and culture as an adult. I certainly took home some inspiration as far as food and recipes go! Melbourne is completely FILLED with amazing restaurants and cafes.

One of my favorite food publications, Donna Hay, is based out of Australia so I snatched up as many magazines as I could. One issue even came with a kitchen towel! I spotted a recipe for Creme Brulee Doughnuts in issue #86 and just knew I had to make them with my own spin. Thanks, OZ, for the sweet inspiration!

Whenever possible, I like to include extra tips, tricks, and advice to help you along in the kitchen. While this recipe is totally doable, it is a little more involved. Hopefully I’ve included everything you need and answered any potential questions, but feel free to leave a comment below if some else comes up!

Even though these are baked doughnuts, there’s no batter involved. Instead, to make these as close to traditional fried doughnuts in taste, texture, and appearance as possible, we’re using a yeast-raised dough. It’s a super rich dough with egg yolks, sugar, butter, AND cream in order to mimic the rich, soft, and fluffy goodness of fried doughnuts. Enriched doughs like this one may take longer to knead and rise, FYI.

Also, since these doughnuts don’t have holes, you don’t need to worry about using a doughnut cutter or making one from two cookie cutters. One round cookie cutter does the trick here!

These doughnuts have a traditional pasty cream filling. It’s made by heating up whole milk (don’t skimp on the fat here – these are doughnuts after all!) then slowly adding some of the hot milk to an egg yolk mixture. We add the milk in gradually to slowly bring the temperature of the eggs up so they don’t scramble before adding them to the hot pot. As long as you follow the instructions you should get a beautifully rich, thick, and smooth pastry cream!

I love to use vanilla bean paste in pastry creams because it lends those little flecks of vanilla to the filling and looks as good as it tastes. Be sure to fill the doughnuts before you make the bruleed topping. I like to use a piping bag fitted with a filling tip to fill the doughnuts.

You will need a kitchen torch to achieve the bruleed sugar topping on these doughnuts. If you don’t have one, then this recipe is the perfect excuse to treat yo’ self! They’re just so much fun. To get that beautifully amber topping we just mix sugar and a little water into a paste and top the baked and filled doughnuts with it. Let it sit for 5 minutes before torching.

The finished doughnuts are best served the day they’re made. You could, of course, make the pastry cream filling a couple days ahead of time and store in the fridge. And you can also make the doughnuts a day ahead of time, though I think they’re best fresh. 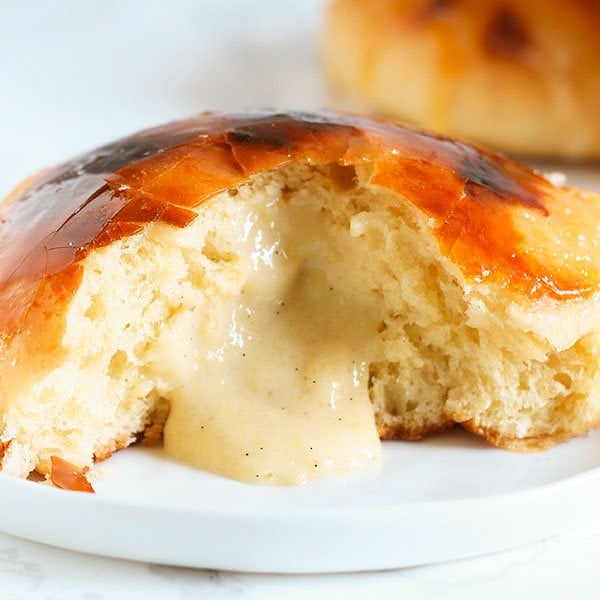 Baked Creme Brulee Doughnuts feature a baked yeast risen doughnut base filled with vanilla bean pastry cream and finished off with a shatteringly crunchy bruleed sugar coating. To die for!