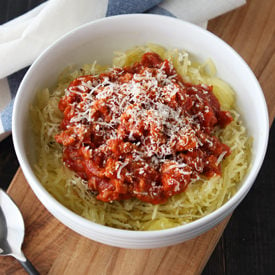 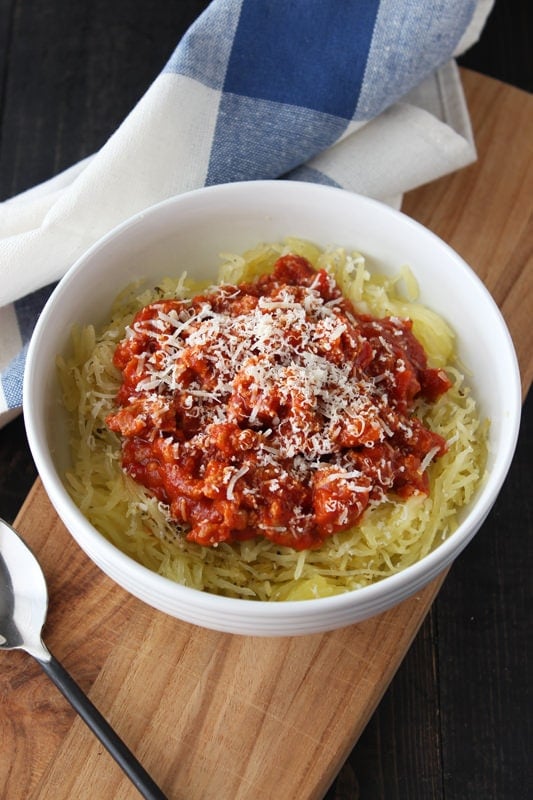 Last month I asked my friends on Facebook what kind of videos they’d like to see for November and I had a few requests for a video on spaghetti squash. It was perfect timing, actually, because just a few days before that my aunt had texted me asking if I had ever made spaghetti squash before. I hadn’t, and she was about to make it for my grandpa who can be a little picky but is supposed to follow a healthy diet.

She texted me a few hours later after she had served up the squash and to my surprise, my grandpa apparently went back for seconds. That’s when I knew I needed to get with the times and try the stuff already. I mean, it’s floating all around Pinterest about how to use spaghetti squash as a low-carb, gluten-free, possibly vegetarian, healthy alternative to pasta. I don’t know about you but I was SUPER skeptical. Pasta is pasta is pasta and nothing can replace it. And yes, while I stand by the fact that nothing can replace pasta, spaghetti squash does do a pretty fantastic job of satisfying pasta carb cravings.

Recipe Rundown
Taste: The squash is slightly sweet but the savory, spicy, and acidic taste of the sauce balances that out beautifully.
Texture: Very satisfying, though not an exact replica of the texture of actual pasta. I was surprised by how each string of “spaghetti” from the squash had a substantial texture to it.
Ease: Super duper easy.
Appearance: Just like spaghetti!
Pros: Low-carb and gluten-free for those on special diets. Plus you’re getting an extra serving of vegetables!
Cons: None at all!
Would I make this again? Yes.

How to make
Spaghetti Squash Spaghetti

You can also use chicken sausage, regular ground turkey or sausage, or ground beef for the sauce. Or, skip the meat and use mushrooms instead to make this vegetarian.
Course: Main Course
Cuisine: Italian