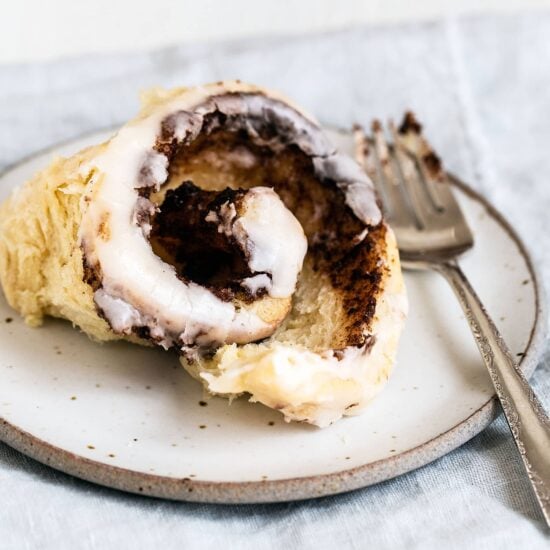 Gooey Cinnamon Rolls are ultra soft and tender, loaded with ooey gooey buttery cinnamon filling, and flooded with vanilla icing. Better than Cinnabon and can be made the night before!

Taste: Sweet without being cloying. Tons of cinnamon goodness.
Texture: The best part. The rolls are ultra soft and pillowy and as you peel away the spiral the filling is insanely gooey and buttery. The flooded icing on top just sends the whole thing into dessert overdrive!
Ease: Takes a few hours but can be made the night before.
Pros: My new favorite scratch made cinnamon roll recipe.
Cons: NONE.
Would I make this again? Yes yes yes yes. 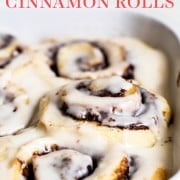 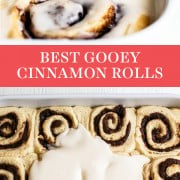 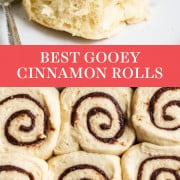 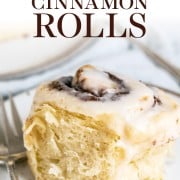 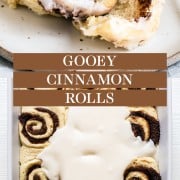 Is there anything more delightful and comforting than homemade cinnamon rolls baking in the oven?

I’m SO excited to share this particular recipe with you. I’ve shared a few recipes for cinnamon rolls in the past with various techniques, textures, and flavors. But I’m pretty sure this one is my favorite. 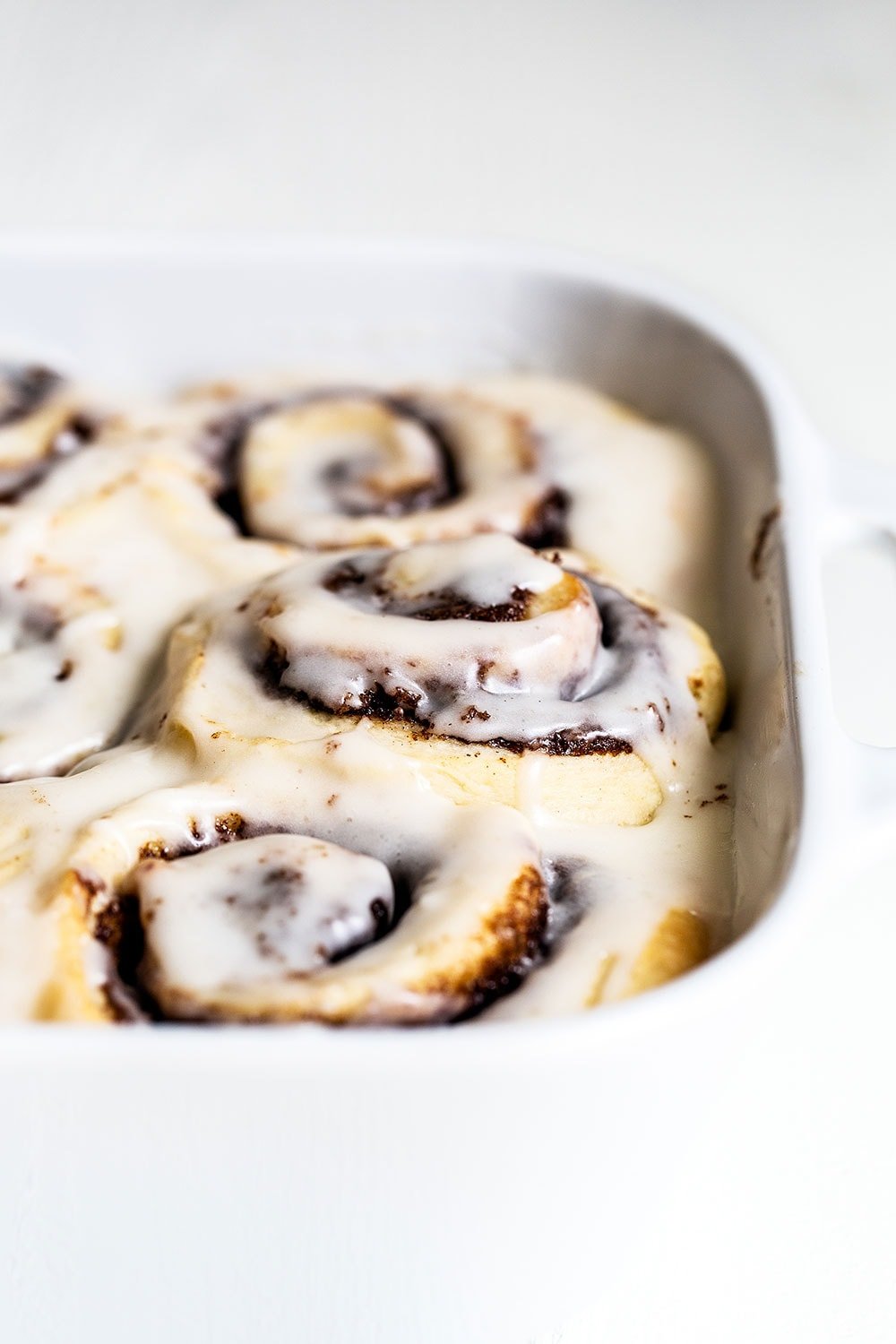 In my family special occasions were marked with cinnamon rolls. But since neither of my parents are bakers, that usually meant prepared cinnamon roll dough from those crazy tubes at the grocery store.

My goal for this recipe was to get a similar ooey, gooey, doughy, and rich texture as the tubed cinnamon rolls… but with way better flavor. And no crazy artificial ingredients or overwhelming sugary sweetness. I also wanted that flood of icing that melts into the rolls in the most mouthwatering way.

If you take these cinnamon buns into work with you, they won’t last longer than an hour. True story. 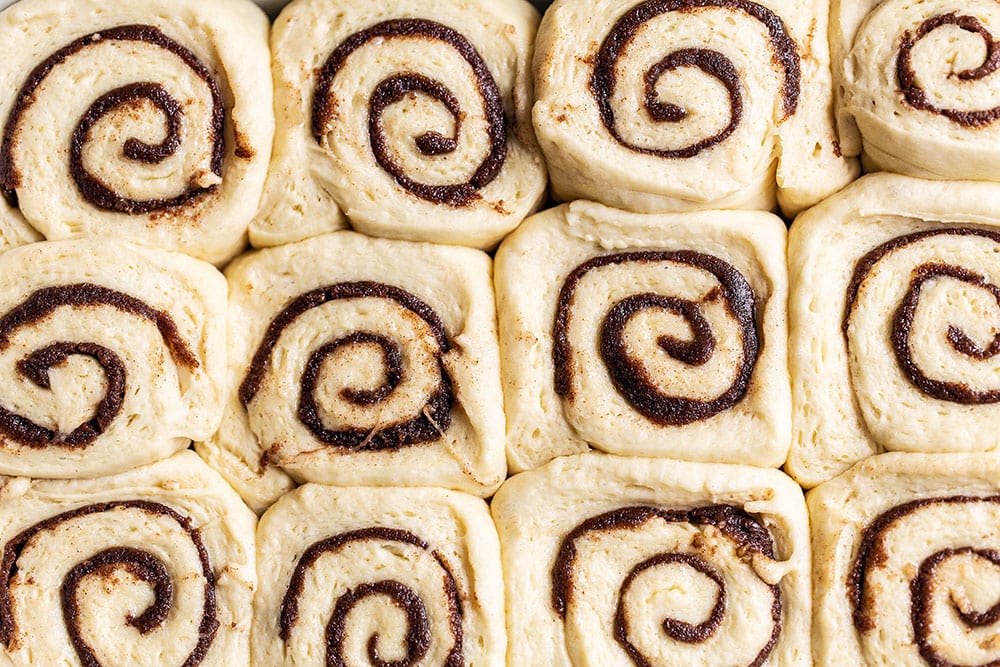 And that’s assuming there’s any leftover to even take to work!

How to Make Gooey Cinnamon Rolls

Here are my favorite tips and tricks for making the best cinnamon rolls ever. Recipe warning: your friends and family will be requesting these constantly!

Is active dry yeast the same as instant yeast?

Active Dry Yeast and Instant Yeast, also called ‘quick rising’ or ‘fast rising’ are actually much more similar than people think. They can be used interchangeably in most recipes.

Active dry yeast simply works a little more slowly than instant yeast. For these cinnamon rolls, you can use active dry yeast in place of the instant yeast. To do so, add it in with the warm milk and butter mixture and a teaspoon of the sugar and allow it to proof for 5 to 10 minutes, or until foamy.

Learn more about the differences between active dry yeast vs, instant yeast here. 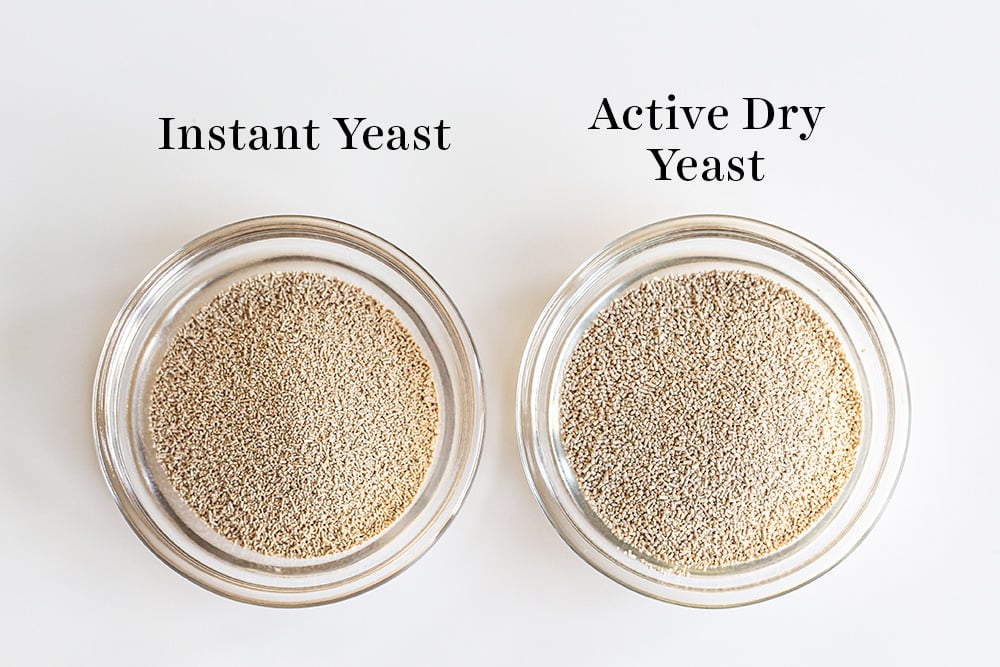 Can I knead cinnamon roll dough by hand?

Yes! You can knead this dough by hand without a stand mixer and dough hook. It may take some more time and upper body strength! Check out my full tutorial on how to knead dough by hand here.

This is a very rich dough so it will take longer to knead than other recipes. ONLY add as much flour as needed to handle the dough. It’s better for the dough to be sticky at the start than to add too much flour and wind up with dense rolls instead of light and fluffy ones.

How long does cinnamon roll dough take to rise?

This dough is an enriched dough, meaning it has ingredients like milk, butter, sour cream, sugar, and eggs to make it ultra rich, tender, and soft once baked. But those ingredients can also slow down rising time. For me the dough took 2 hours for the first rise, and 90 minutes for the second rise.

Rising times will depend on the warmth and humidity of your kitchen so keep that in mind.

How to tell when the dough is risen?

The dough should double in volume for the first rise. I always like to use a glass mixing bowl to rise my dough in so I can see how much it’s risen more easily.

The best way to tell if the dough is risen enough to shape is to perform the ripe test. Press two fingers in the risen dough up to the second knuckle and then take them out. If the indentations remain the dough is “ripe” and ready for punch down. If not, cover and let the dough rise until the indentations do remain.

Now the dough is ready to be rolled out and shaped into rolls! Allow the shaped rolls to rise again until a gentle indentation from your finger remains. 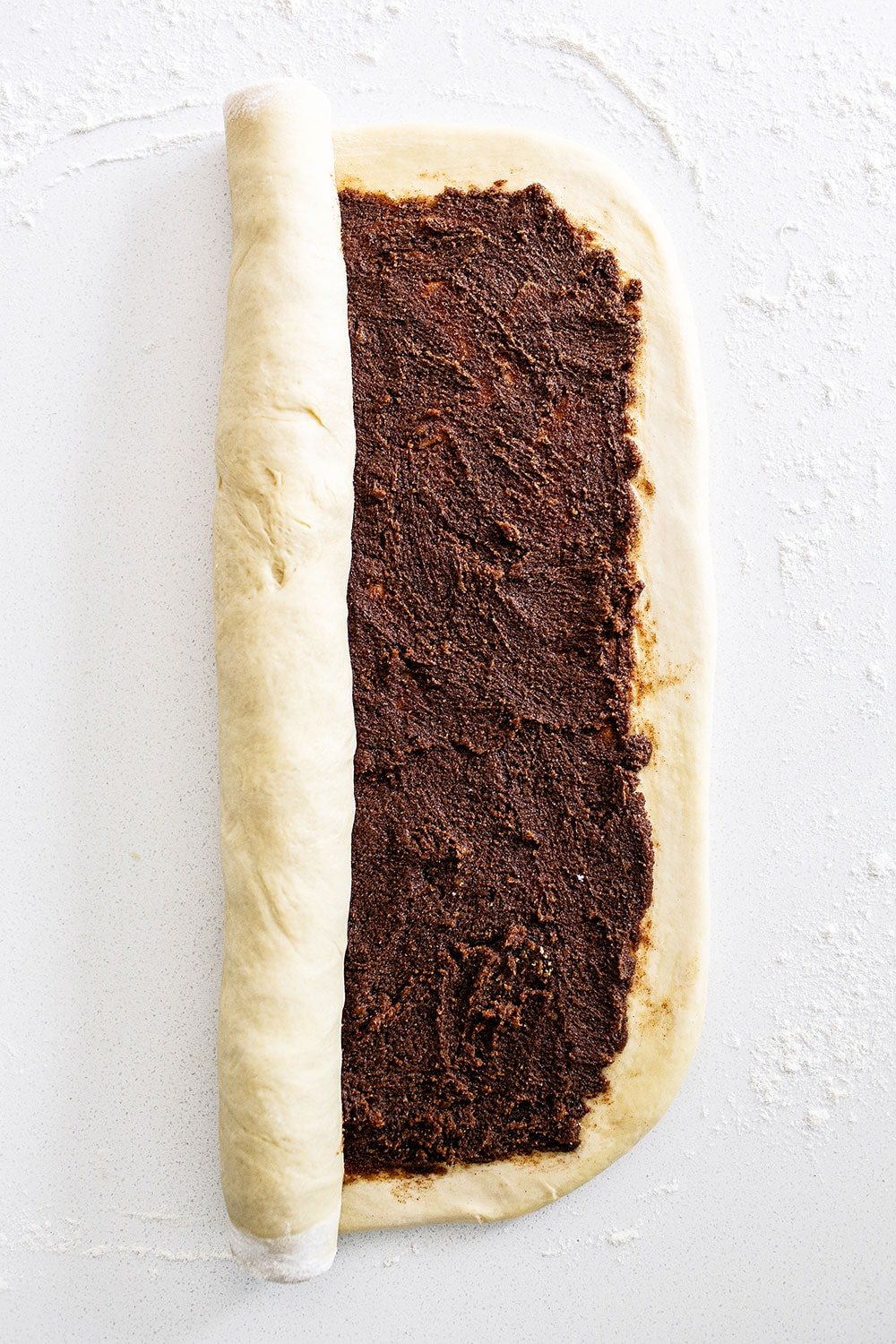 Rolling up your cinnamon roll dough nice and tight is the key to beautiful round rolls and visible spirals.  As you roll the dough up, stretch it towards you and over so it stays tight instead of floppy. Finish off the spiral with the seam side down to seal in the filling. Push the ends into the center slightly with your palms to create an even log shape then cut off the wonky end bits.

How to Slice Cinnamon Roll Dough

To get picture perfect cinnamon buns, it’s important to slice the log of dough without squashing it. The best tool for that is a very sharp chef’s knife that you use sweeping motions, not sawing motions. If you don’t have a super sharp knife you can also use a serrated knife and sweeping motions. Or you can use dental floss to slice the dough, but be sure it’s unflavored.

To get evenly sized pieces cut the log directly in half so you have two logs. Then cut each log in half again. Cut each remaining piece into 3 pieces for a total of 12. I know this sounds confusing to read but as you slice it’ll make sense.

I opted for a basic powdered sugar icing for this recipe. I love when the icing floods the cinnamon rolls and melts into them for the ultimate gooey bite. Kind of like the refrigerated cinnamon roll tubes from the grocery store. You want the icing to have a pourable consistency, not too thick and not too watery. Adjust the powdered sugar to milk ratio if needed. 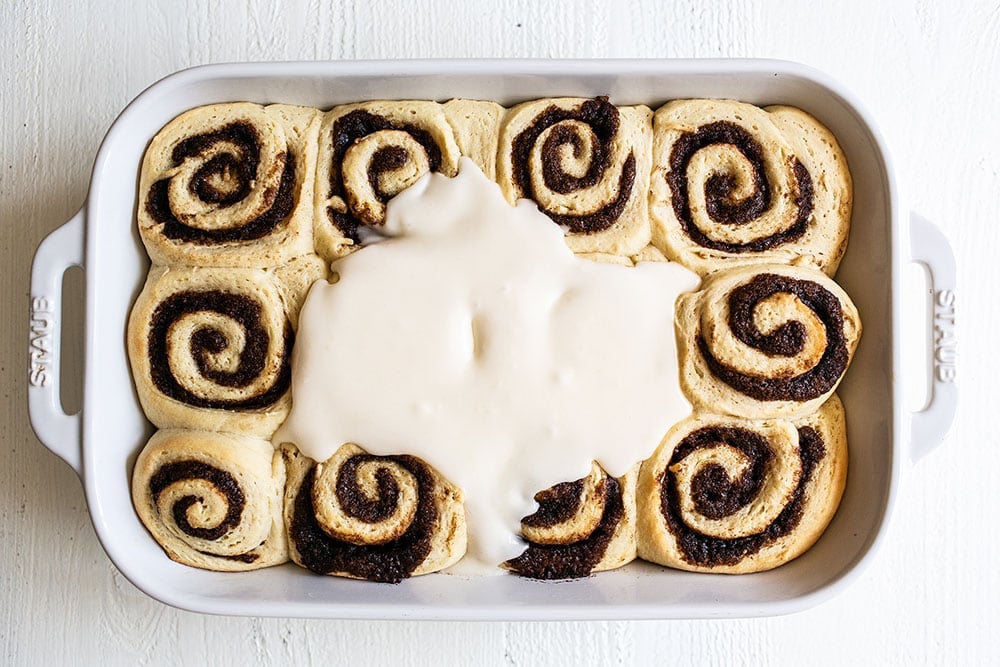 Can I make Cream Cheese Frosting Instead?

Yes! Just combine the below ingredients in the bowl of an electric mixer on medium-high for 2 minutes, or until super smooth.

How to Make Cinnamon Rolls Ahead of Time

Cinnamon rolls are best served fresh and warm. Right out of the oven if possible! You can store them covered at room temperature for a day, but I’d advise re-warming in the oven or microwave them before serving.

The fact is cinnamon rolls stale quickly. That’s why making them ahead of time is a great option!

Refrigerate the shaped but unbaked cinnamon rolls in the pans you plan to bake them in. I like to let them rise at room temperature for about 30 minutes before refrigerating to give them a jump start on rising, especially in the winter when it takes longer. Cover the rolls tightly with plastic wrap and refrigerate for up to 24 hours. The dough should continue to rise slowly in the fridge. You can also freeze for up to 1 month. Defrost overnight.

When getting ready to bake, loosen the plastic wrap and let rise at room temperature until doubled in size. This will depend entirely on how much they rose in the fridge and how warm / humid your kitchen is. It may take just 20 to 30 minutes or it may take over an hour. Proceed with baking as the recipe is written. 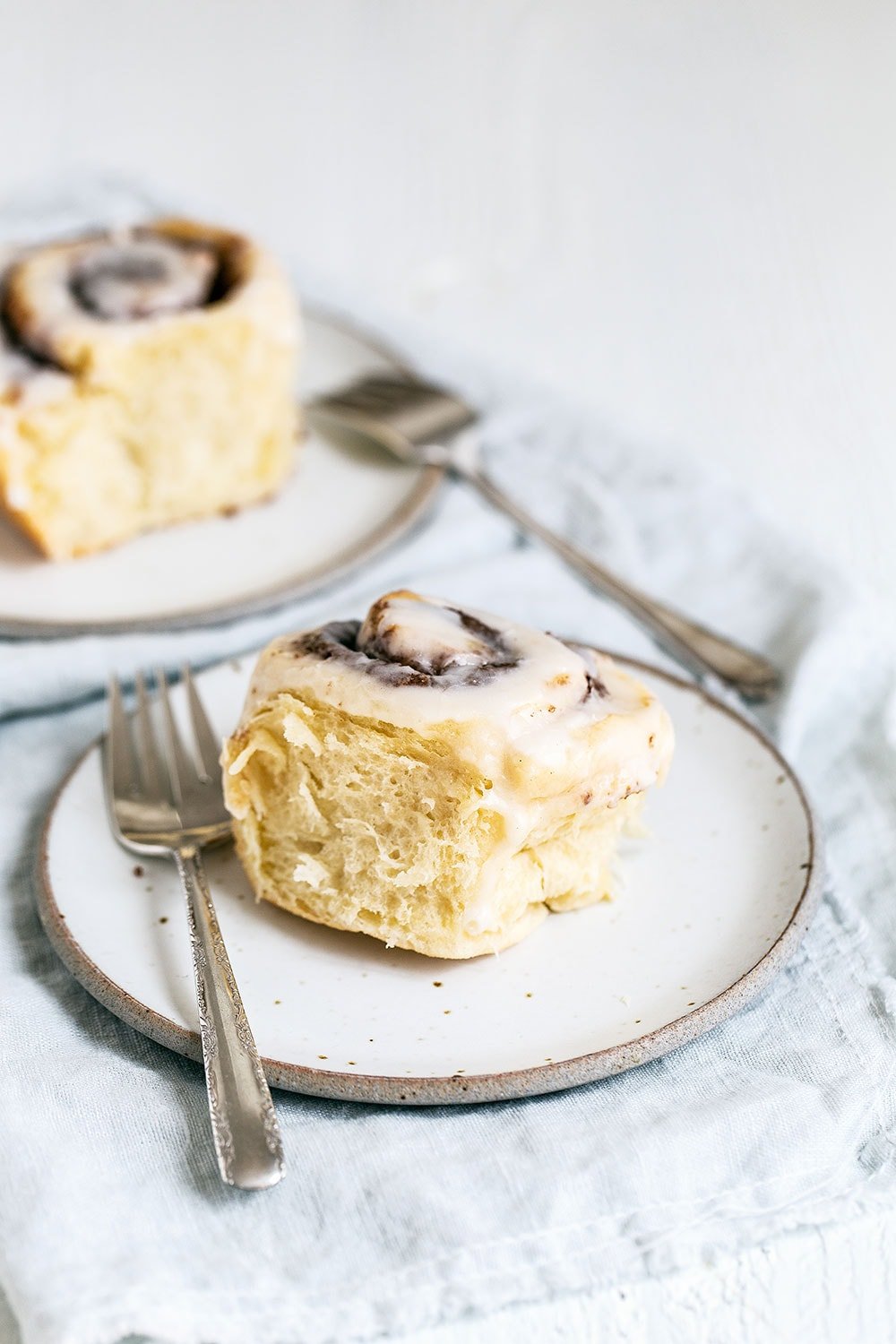 How to make
Gooey Cinnamon Rolls 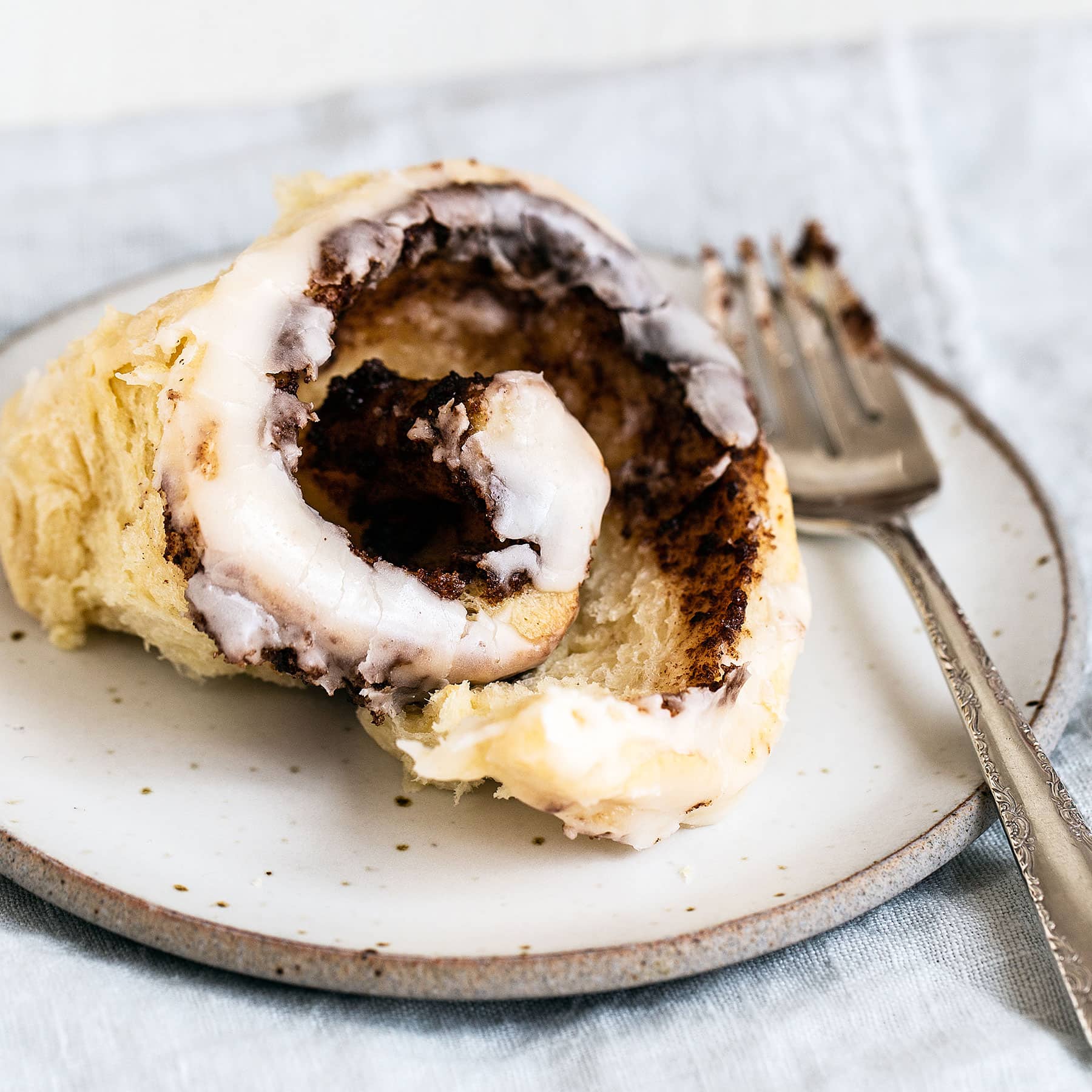 Gooey Cinnamon Rolls are ultra soft and tender, loaded with ooey gooey buttery cinnamon filling, and flooded with vanilla icing. Better than Cinnabon and can be made the night before!

To shape the dough:

*You can use active dry yeast in place of the instant yeast. Add it in with the warm (110°F) milk and butter mixture and a teaspoon of the sugar and allow it to proof for 5 to 10 minutes, or until foamy.
Course : Breakfast, Dessert
Cuisine : American

This was the recipe selection for the September 2019 baking challenge! Check it out here and see the entries below: 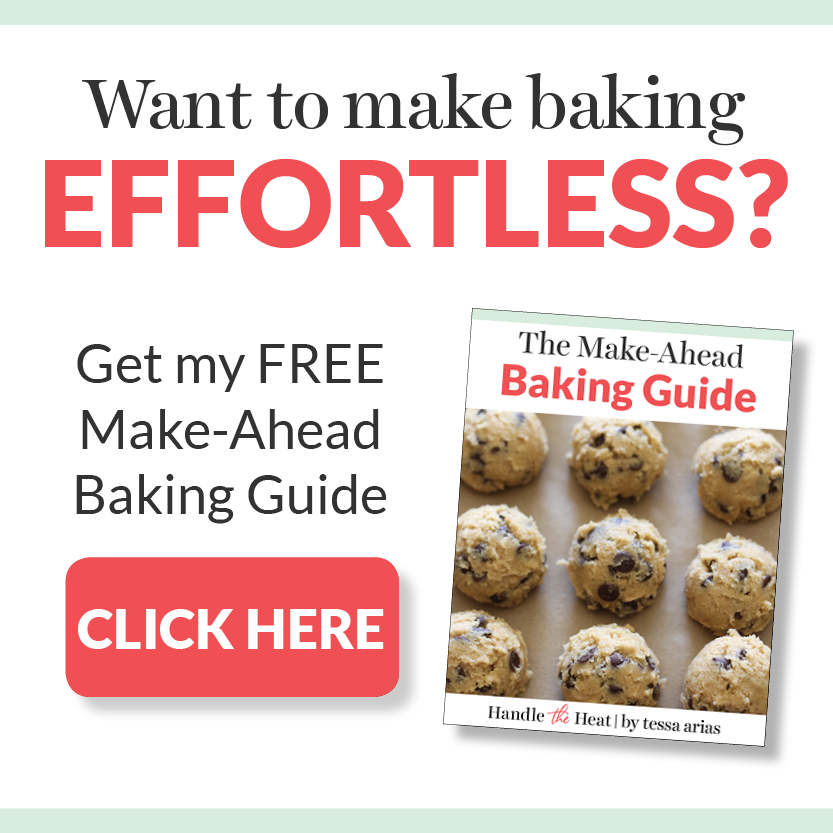