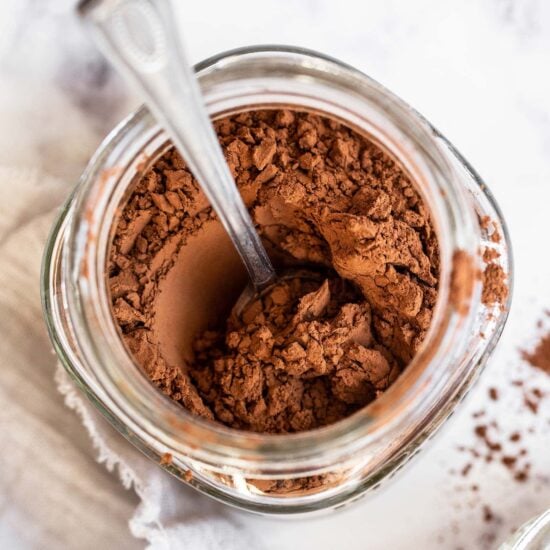 The exact differences between Natural Cocoa vs. Dutch Process Cocoa Powder, how they work on a chemical level, which is better, and how to substitute! 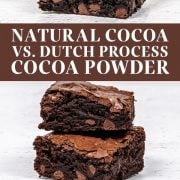 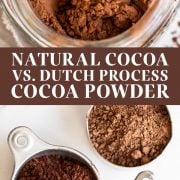 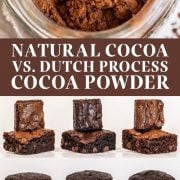 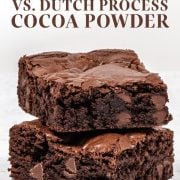 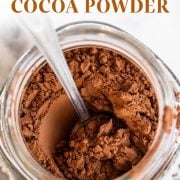 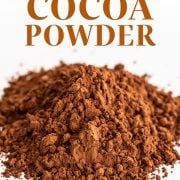 If you’re a chocoholic like me, you probably find yourself using cocoa powder often. You might have wondered before how natural unsweetened cocoa powder is different than Dutch process cocoa powder. And, if one can be substituted for the other. Since Dutch process is harder to find, you’ve probably also wondered if you really need to use it. 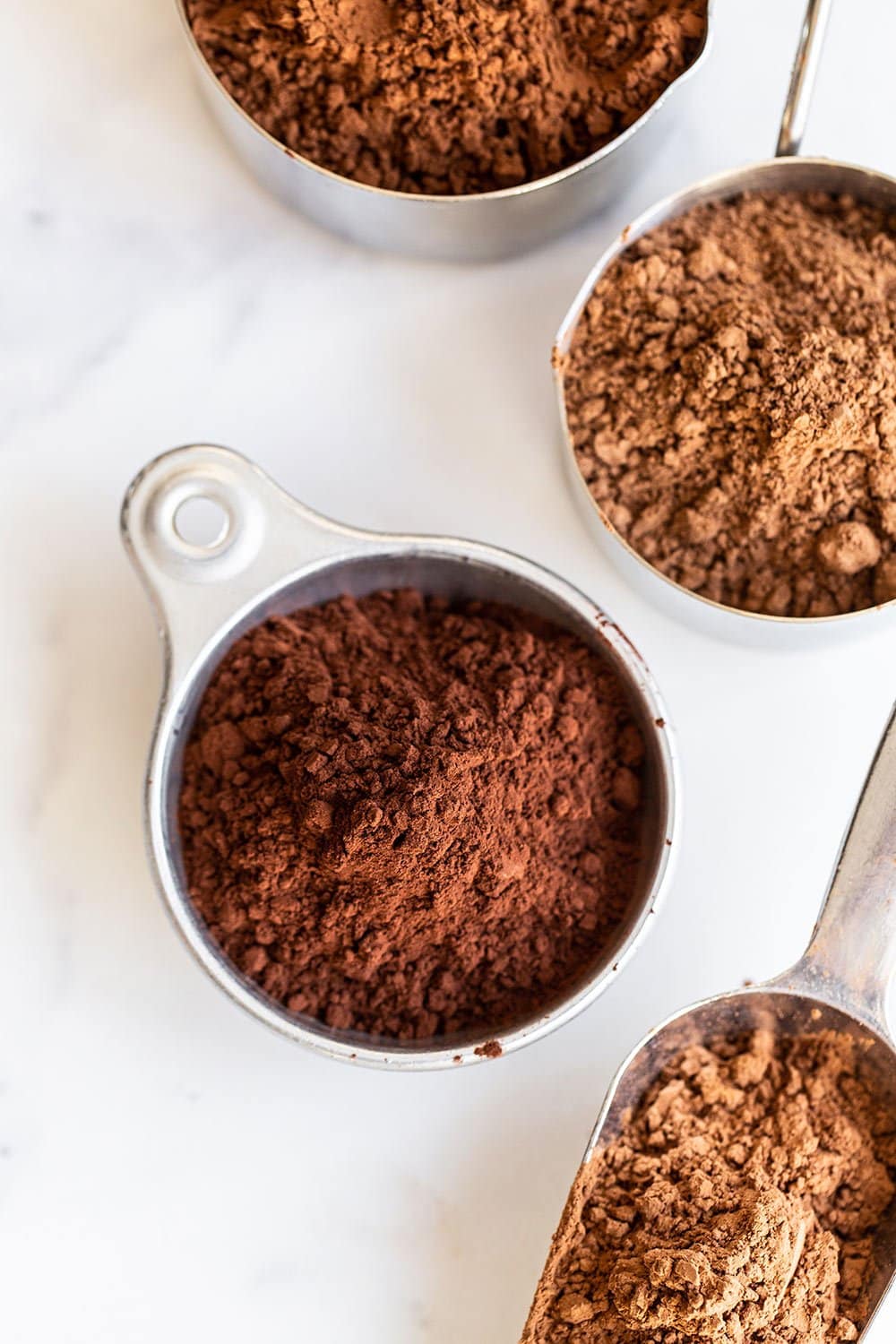 Today I’m going to be showing you exactly what the differences between these cocoa powders is! Including how they affect your baking and how you can substitute. If you want to improve your baking, be sure to watch the video explanation below! 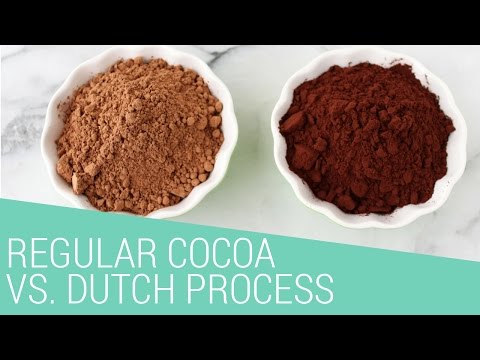 While it’s important to learn about Natural vs. Dutch Cocoa, click this link to learn the secret #1 MOST IMPORTANT thing about cocoa powder. The answer may surprise you and it’s something most people had no idea about! 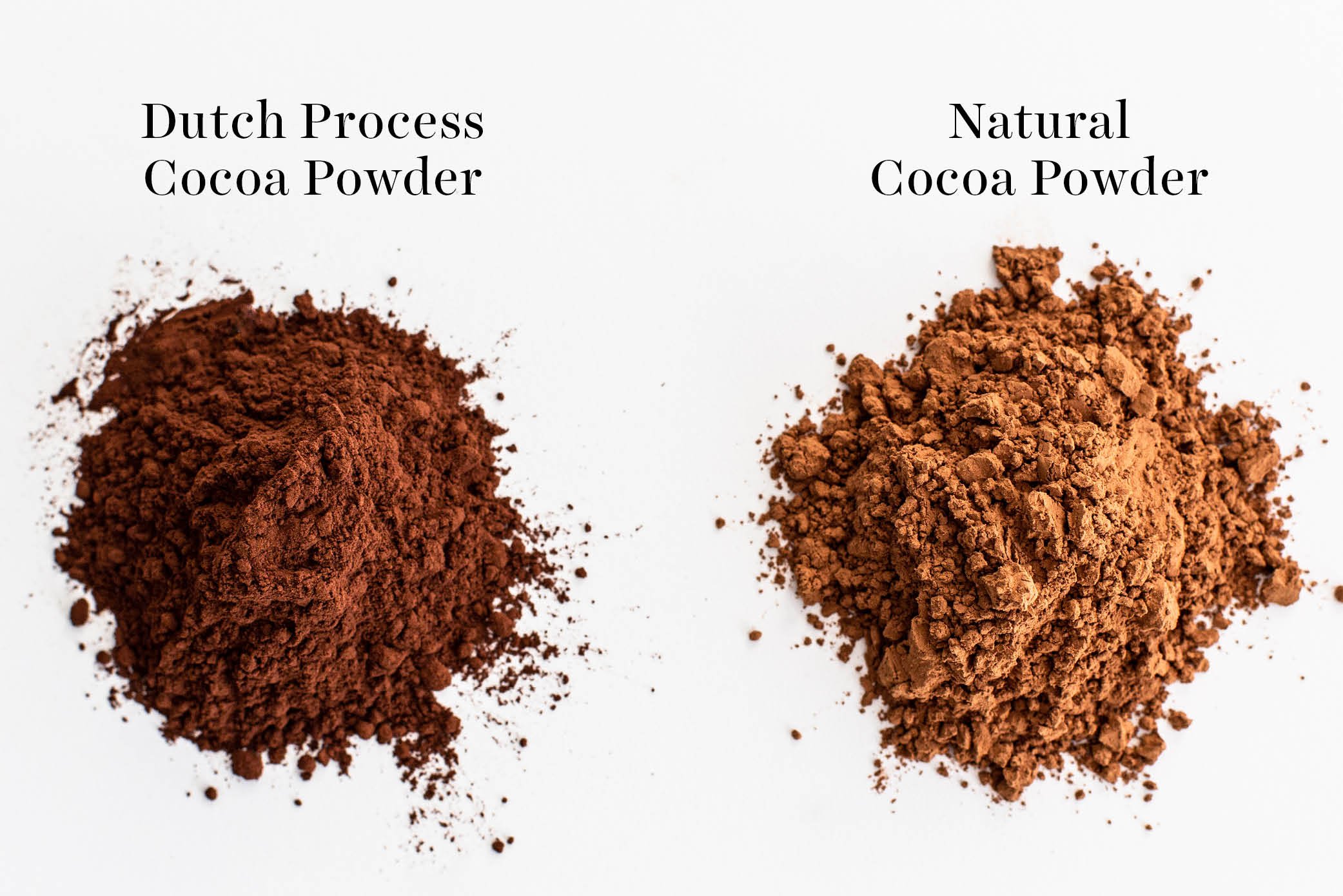 What is cocoa powder?

The product resulting from the process of fermenting, drying, roasting, and grinding cocoa beans into a powder.

More specifically, the fermented and roasted beans are ground into a paste called chocolate liquor which is a mixture of cocoa solids and cocoa butter. Some of that chocolate liquor is used to make chocolate candy and bar products. The rest is pressed further to remove most of the cocoa powder (which is also used to make chocolate). The cocoa solids that remain are ground into what becomes cocoa powder.

What is natural cocoa powder?

This is medium brown in color, bitter in flavor, and is popular in American brownie and cake recipes (think Devil’s Food Cake). Brands such as Nestle, Ghirardelli, and sometimes Hershey’s are natural cocoa powders.

What kind of leavener works with natural cocoa powder?

Due to the fact that natural cocoa powder is highly acidic (pH between 5 and 6 typically), it’s often paired with baking soda as a leavener since it’s a natural alkaline ingredient. Basically, this just means that baking soda helps neutralize that acidity.

What is Dutch processed cocoa powder?

How do I tell if a cocoa powder is Dutch processed?

To figure out if a cocoa powder is Dutch processed or natural, look out for the words “Dutched,” “cocoa processed with alkali,” “alkalized,’ or “European style” on the packaging, which would mean it’s Dutch process.

What kind of leavener works with Dutch processed cocoa powder?

Oppositely from natural cocoa, Dutch-process cocoa is typically paired with baking powder as a leavener since the acidity has already been neutralized. Dutch-process cocoa powder actually won’t react to baking soda, meaning if you pair the two together without any other acid in a recipe, like brown sugar, lemon, or yogurt, you won’t get much leavening effect. I actually have an entire post explaining the differences between baking soda and baking powder HERE.

What do the differences in color signify? 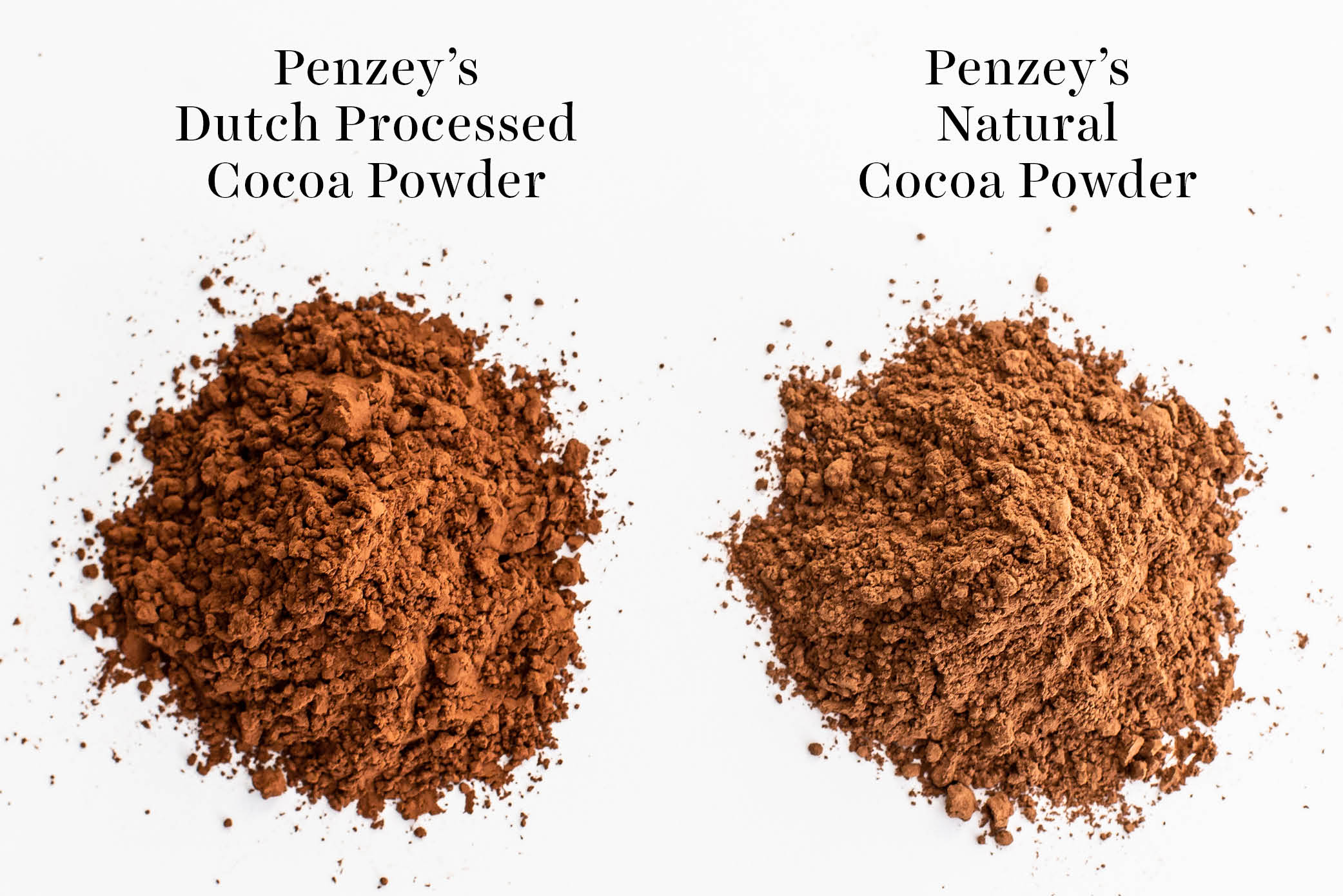 What’s perhaps most immediately noticeable about Dutch cocoa is its rich, deep, and sometimes reddish color that is a byproduct of Dutching. Contrast that with the lighter tan color of natural cocoa. However, color isn’t always an indicator of quality or chocolate flavor (see Black Cocoa Powder below).

You can often find it a more specialty of gourmet stores such as Whole Foods, Williams Sonoma, Sur la Table, Penzey’s, or simply purchase it online from Amazon or King Arthur Flour. I really like E. Guittard, Bensdorp, and Penzey’s.

What is Black Cocoa Powder?

The ever popular Oreo cookie is made with highly Dutched cocoa powder, sometimes called black cocoa. It imparts that characteristic dark color but very little chocolate flavor or fat, resulting in a more dry or crumbly product (more on fat below).

While the two cocoa powders are quite different, one isn’t necessarily better than the other. They can be used interchangeably if there is no baking soda or baking powder called for in the recipe.

Generally you will have more success substituting natural cocoa powder for Dutch process, but less success the other way around.

It can get confusing and since baking is a science, it’s best to be precise and follow the recipe exactly to eliminate the possibility of mistakes. Especially since good cocoa powder isn’t cheap!

What if the recipe doesn’t specify the type of cocoa powder to use? 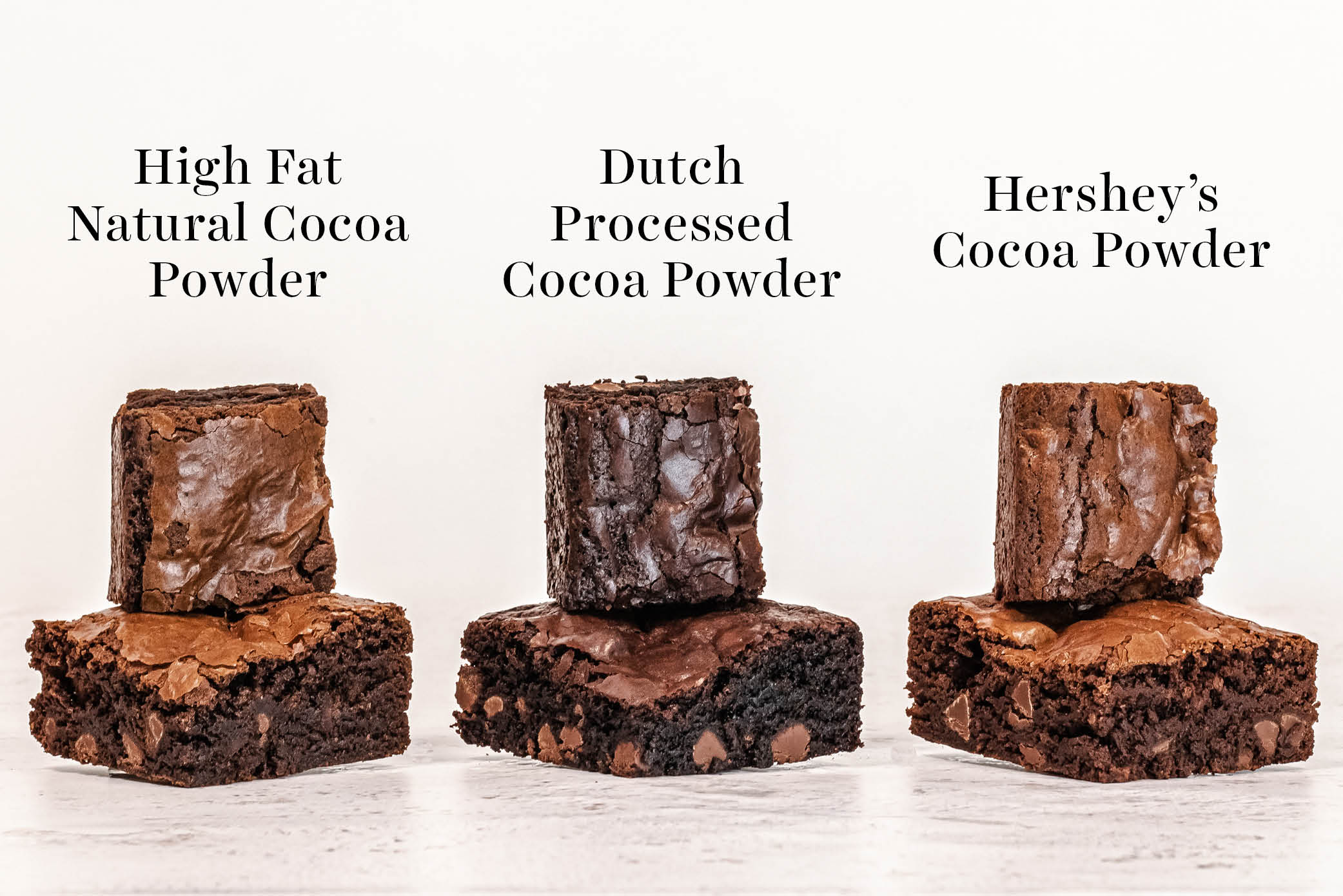 I personally find natural cocoa powder to be more reminiscent of childhood chocolate treats in America.

What is cacao powder?

In cacao powder, the beans are processed at temperatures low enough that the final powder is considered ‘raw.’ This means it has more nutrients, but is also much more bitter.

Cocoa powder goes through a process of roasting and higher heat exposure which means it is not raw and loses some of its nutritional value. That’s what helps to make regular cocoa powder less bitter.

I don’t bake with cacao powder. In part because of its bitter taste. But also because most recipes I use cocoa powder in are baked, which would strip the more expensive cacao powder of those raw nutrients.

How to store cocoa powder:

Store in a cool dry place in an airtight container and use within 1 year of purchase. Don’t refrigerate or freeze, which promotes moisture and therefore spoilage.

Can I add cocoa powder to any recipe to make it chocolate?

No. As mentioned above, cocoa powder contains starch which makes it a drying ingredient. It’ll often alter the entire chemistry of a recipe is you try to take a vanilla cake, sugar cookie, or blondie recipe and add cocoa powder.

The one exception is for American buttercream, which you can usually add cocoa powder to without issue. 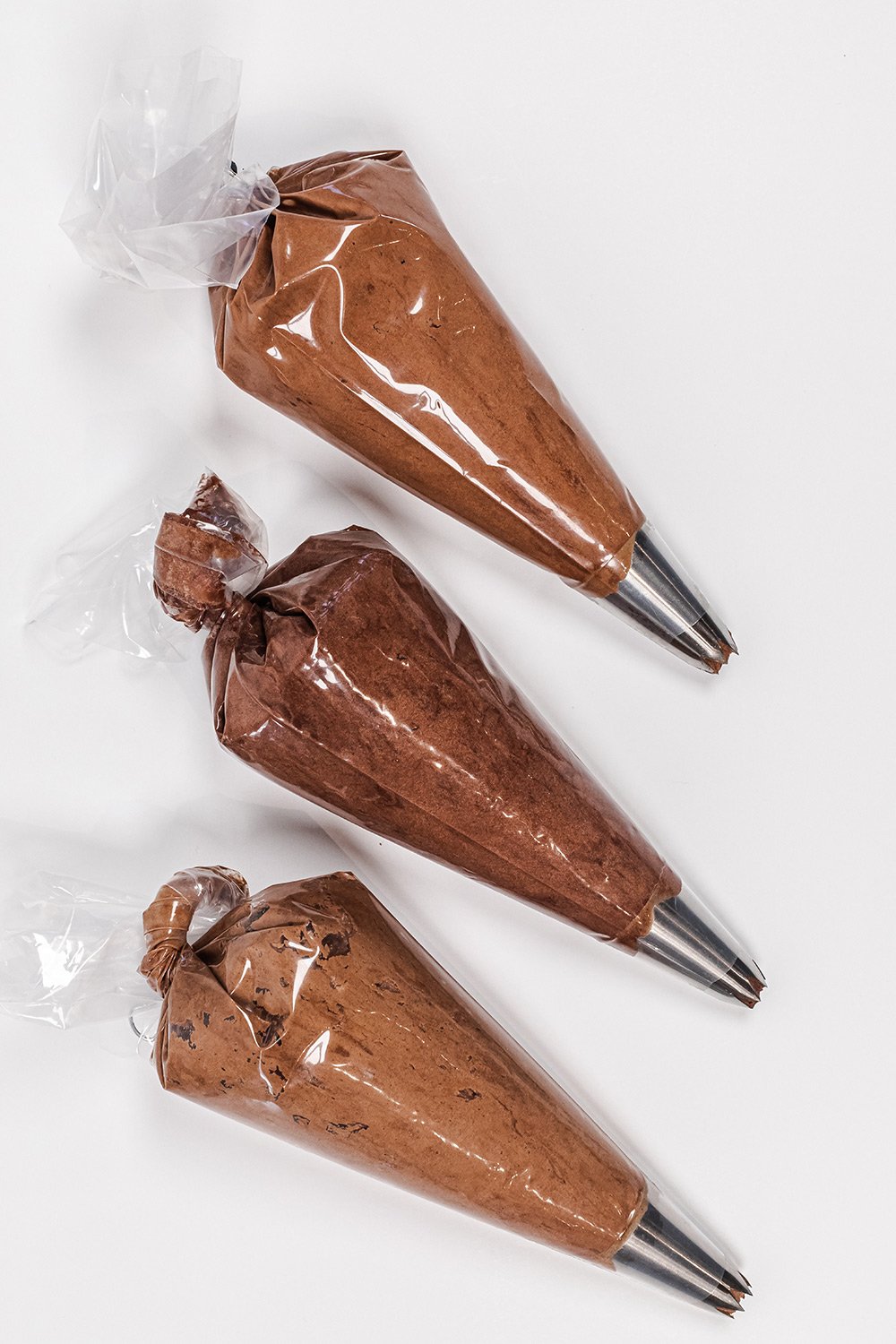 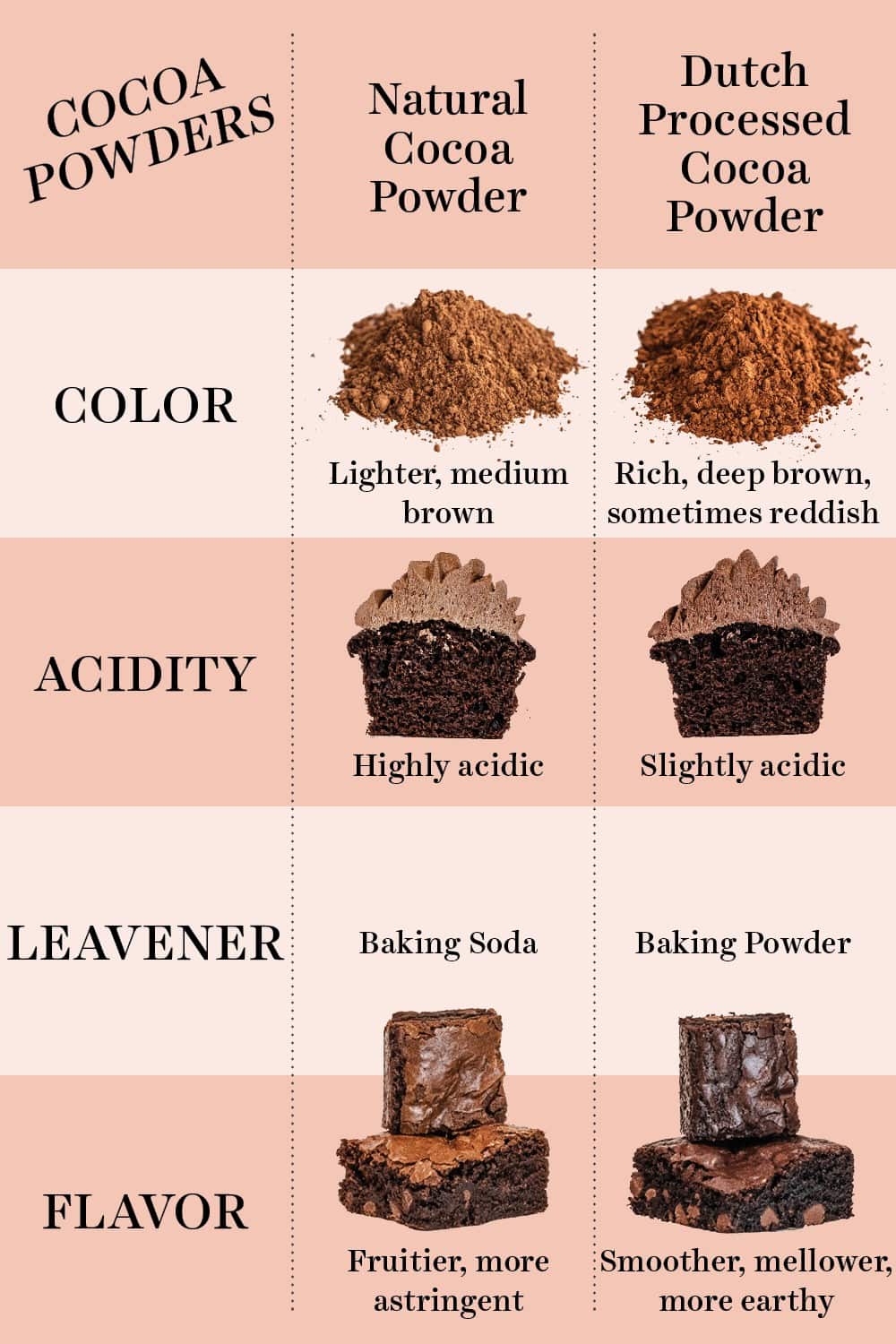