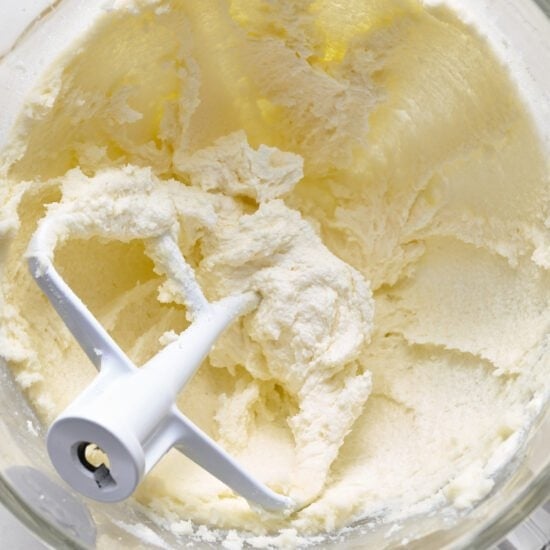 How to Cream Butter and Sugar

Are you under-creaming or over-creaming your butter and sugar? I’m sharing the RIGHT way of how to cream butter and sugar for perfect cakes, cupcakes, or cookies every time! Side-by-side comparisons and lots of baking science tips included. 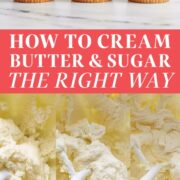 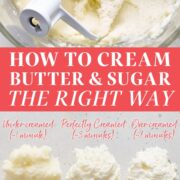 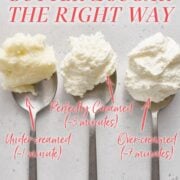 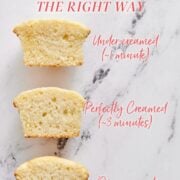 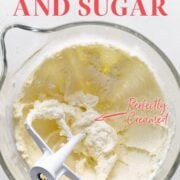 Have you ever baked a cake that ended up dense and heavy instead of light and fluffy? Or worst of all… a cake that collapsed as it baked or cooled?

Or what about cookies that spread out into sad flat puddles or deflated on the cooling rack?

So many baking recipes involve a step that most people overlook: creaming the butter and sugar together. It’s surprisingly important yet easy to misunderstand.

There are a few important factors and critical steps to know when creaming butter and sugar. I’ll show you what under-creamed and over-creamed butter looks like in your mixer and what havoc it can wreck on your baked goods. Once you understand this skill you’ll be baking like a pro in no time.

I’ve broken it all down for you in this article so that you’ll end up with perfectly creamed butter and sugar and consistently perfect desserts from here on out!

What does it mean to cream butter and sugar?

“Creaming” refers to the process of beating slightly softened butter and sugar until the butter is malleable enough to emulsify with other ingredients like eggs, evenly incorporates the sugar into the butter, and creates enough air bubbles to help leaven the cake, cupcake, or cookie to the desired light and fluffy texture.

This happens when the abrasive edges of the sugar granules pierce through the fat and create lots of tiny air bubbles.

Why do you need to cream butter and sugar for cookies, cupcakes, and cakes?

Similarly, the process of creaming also creates little air bubbles in our dough or batter which is called mechanical leavening. Creaming butter and sugar can mean the difference between a heavy, leaden cake or a light, tender, and fluffy cake!

Most cookie recipes and many American-style cake recipes use a combination of creaming (mechanical leavening) and chemical leaveners because they contain so much fat they need both to produce an appealing texture. The air bubbles created by creaming actually provide a space for the gas created by baking soda and/or baking powder to release and expand.

Baked goods only rise properly when the batter or dough contains enough air bubbles to do so, either through chemical or mechanical leavening. In fact, some cake and bread products are so aerated that as much as 80% of their volume may be empty space!

Those air bubbles expand when they encounter the heat of the oven. The final structure of the product sets up around those air bubbles, producing the desired light and fluffy texture.

A note on leavening: some cake recipes call for beating the whole eggs, egg whites, or egg yolks to produce different textures. Sometimes these recipes don’t use butter or chemical leaveners (such as angel food cake). Other recipes use steam from water content in the mixture to leaven the product while baking (think the flaky layers of pie crust or the hollow interiors of choux pastry, like eclairs). Yeast is also a leavening agent… a biological one.

What happens when you under-cream or over-cream butter and sugar?

Take a look at the photos below to see how too little or too much creaming can affect your cupcakes.

Perfectly creamed butter and sugar has lightened in color and has peaks and valleys in its texture, giving it that ‘fluffy’ appearance. The sugar appears to be dissolved, but when you rub the mixture between your fingers you’ll still feel the sugar granules.

Under-creamed butter and sugar looks darker in color with a visible heavy and gritty texture from the unincorporated sugar. It doesn’t allow enough air to become incorporated into your batter or dough. This can lead to heavy cake that doesn’t properly rise or dense cookies. In our cupcake experiment, under-creaming led to cupcakes that were shorter with a less even crumb. This is a much more common mistake, so watch out for it.

Over-creamed butter and sugar adds in too much air and alters the final texture… typically to be more gummy and dense. Sometimes over-creaming can produce cakes, cupcakes, or cookies that collapse upon baking or upon cooling if the mixture is well and truly over-creamed (where it looks like curdled milk). Other times you’ll simply get larger holes and tunneling in the texture of your cakes and cupcakes.

When we made the 7 minute creamed cupcakes, we actually had measurably more batter than the other two batches. That’s how much extra air it incorporated! The resulting cupcakes were tall and delicate in texture, though maybe a touch too delicate for my preferences.

How to Cream Butter and Sugar:

The temperature of your butter is one of the most important factors of properly creaming butter and sugar. It must be at a COOL room temperature, about 67°F. If your butter is visibly greasy and your finger sinks into the stick when pressed, it’s far too warm. That warmth will prevent the butter from holding onto air bubbles as it creams. In fact, butter itself is an emulsion of fat and water. If at any point it becomes too warm, that emulsion breaks and will not return, leading to problems like sunken cakes or flat puddle cookies.

Instead, butter at the proper temperature should give just slightly when pressed with a finger and not appear greasy at all. It also shouldn’t be so cold that it’s brittle.

The exact right temperature of butter in your kitchen will depend on a few factors:

Nothing special here, regular granulated sugar or brown sugar work best for creaming. Their granule size is perfect for drilling those tiny air pockets into the butter as described above. This is also why swapping in a liquid sugar like honey or maple syrup, soft powdered sugar, or even a ‘raw’ sugar product (they aren’t actually raw FYI) which has a larger granule size can have unintended consequences to the final texture.

I use my KitchenAid stand mixer fitted with the paddle attachment when creaming butter and sugar. Don’t use the whisk attachment, the butter will get stuck in the tines and we’re not trying to create whipped butter with so much air that your final cake, cupcake, or cookie product collapses while baking.

I also prefer to use the standard paddle attachment that came with my mixer, not one that has a band of silicone added to ‘scrape’ the sides of the bowl. I’ve tested those side-by-side with my standard paddle and find the latter performs better. More on scraping below.

In fact, one of our HTH community members, David, counted the revolutions per minute of his old vs. new mixer and found them to be wildly different from one another. For this reason, I don’t give specific speed levels when writing recipe instructions. Instead, I’ll instruct a general speed such as ‘medium high’ that you’ll need to match with your own mixer.

Should you cream butter with a stand mixer or hand mixer?

A stand mixer truly is the best bet for perfectly creamed butter and sugar. If you need to use a hand-held electric mixer instead, be sure your bowl is the right size and shape so that the butter and sugar are actually being creamed, not just flung out to the sides of the bowl. A hand mixer will also take longer to cream.

Can I cream butter and sugar by hand without an electric mixer?

Unfortunately, this isn’t a technique I would recommend. Most people aren’t strong enough to incorporate enough air consistently into their butter when beating by hand. The result is often an uneven mixture that’s generally under-creamed.

Step 2: Cream the butter and sugar

There are so many factors that influence the speed at which your butter and sugar will become properly creamed. Temperature, mixer power, paddle size and shape, the amount of butter you’re creaming, etc. For this reason I will usually give a range of time for mixing as well as a visual indication for what to look for. You can see that reflected in the photos in this post!

Generally, two to three minutes at whatever your mixer’s version of medium-high speed is perfect in my kitchen for cookies. They don’t need as much creaming because they have less structure than cakes and can hold onto less air. Three to five minutes at medium high tends to work best for cakes and cupcakes. Pay more attention to how the butter and sugar look than blindly following an amount of time.

Also, be careful not to turn your mixer speed up to the highest setting. The air bubbles need to be gradually developed into the mixture so medium-high speed is your best bet.

Perfectly creamed butter will lighten in color, the sugar granules will look to be ‘dissolved,’ and the entire mixture will have grown slightly in volume, giving it those fluffy peaks and valleys.

Over-creamed butter will look like whipped butter. Unfortunately, if you realize you’ve over-creamed butter (which can happen all too easily if you’re distracted while your mixer is on… Instagram I’m looking at you!), that mixture cannot be corrected. It shouldn’t be used in your recipe. Instead, feel free to add some salt to it for a whipped butter to spread on bread. Or, add some powdered sugar, honey, and cinnamon to it for a delicious honey butter (that full recipe can be found in this recipe post here).

Step 3: Scrape down the bowl

What happens when you don’t scrape down your mixing bowl when beating butter and sugar? You end up with unincorporated clumps of butter that can often ‘explode’ when they hit the heat of the oven. If you’ve ever baked a batch of cupcakes where 10 of them look fine but one or two look like they burst open… well that was probably from an unincorporated piece of butter. Same can happen to cookies.

Typically the next steps will be to add the eggs, vanilla, and the dry ingredients. Some more complex cake recipes will have you separate eggs or add the ingredients in alternatingly. Whatever the next steps are, all other ingredients will incorporate a lot better if your butter is properly creamed.

Tessa’s tip: If you’re worried your butter has warmed up too much, especially for basic cookie dough recipes, use eggs that are at a cooler temperature. This goes against most advice that calls for room temperature eggs, but the temperature of your butter is more important. You’ll just need to beat the cooler eggs in a little longer to properly emulsify.

More science of baking articles to check out: