How to Measure Flour - Handle the Heat 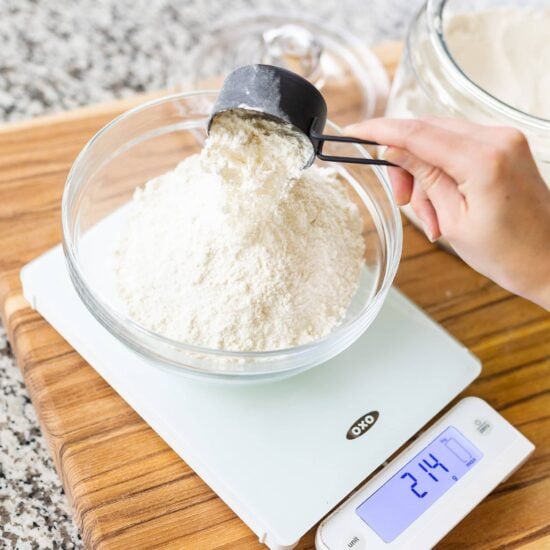 Filed Under: Baking Science | How To | Videos

How to Measure Flour

How to Measure Flour correctly for baking so you end up with perfect results every time! This will help prevent dense, tough, or rubbery cakes, cookies, brownies and more. Click here to receive my free weight measuring chart. 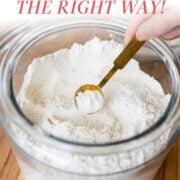 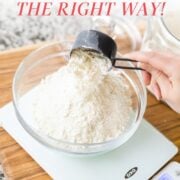 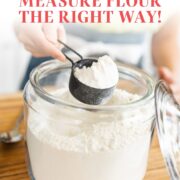 If you’ve been following me for a while, you’ve probably seen me talk about the CORRECT way of how to measure flour at one time or another. 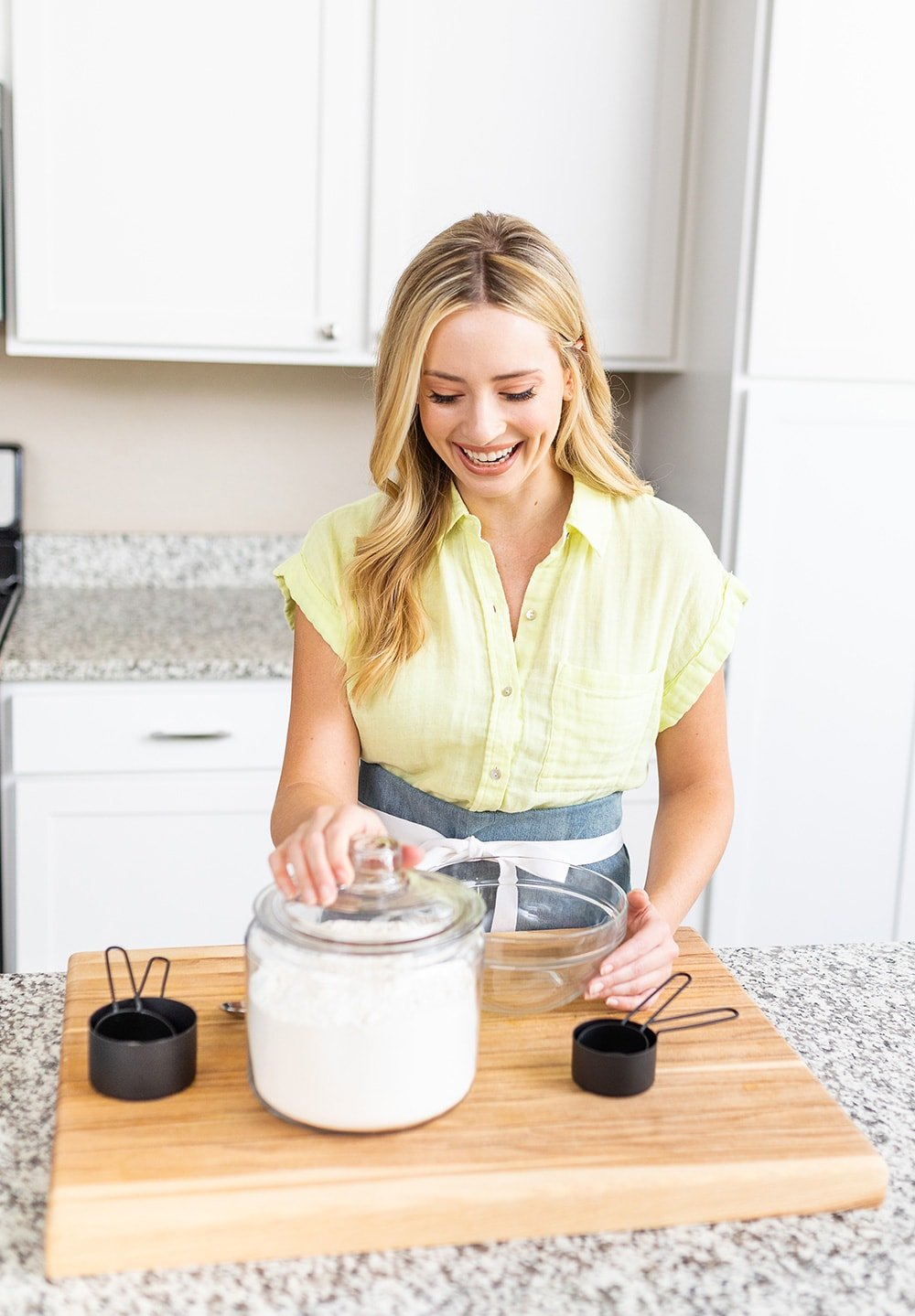 How you measure your baking ingredients can make or break your success in the kitchen.

It’s actually kind of crazy just how critical this one step can be! I see SO many frustrated comments and messages from you guys asking what could have went wrong when a recipe doesn’t turn out. I would venture to say at least 50% of the time (probably more) it’s due to measurement issues.

The easiest ingredient to mis-measure is flour. That’s because it can be so easily compacted into a container or measuring cup without you even realizing.

Basically, it’s all too easy to accidentally add more flour than the recipe actually calls for. You can also mis-measure other ingredients, but flour is the most common and most damaging if measured wrong. This can yield baking results that are:

AKA… results that no one wants!

Luckily with a few simple tricks it’s easy to improve your baking by learning how to measure your flour accurately. I’ve laid it all out in the video and instructions below. If you follow these guidelines EACH time you bake a recipe, you’ll see much more consistent results. 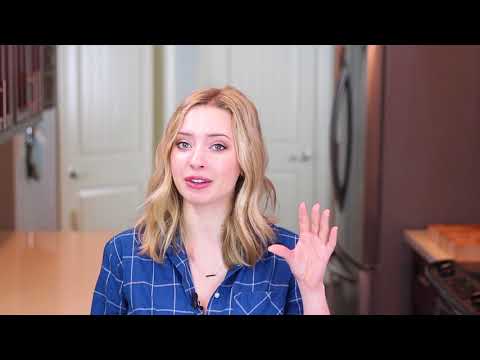 How to Measure Flour

Why is it important to measure flour correctly?

Here’s a visual example. The cookie on the left was made by measuring flour with a scale, the one on the right was made with a compacted cup of flour. Those cookies ended up being dry and tough, and hardly spread out: 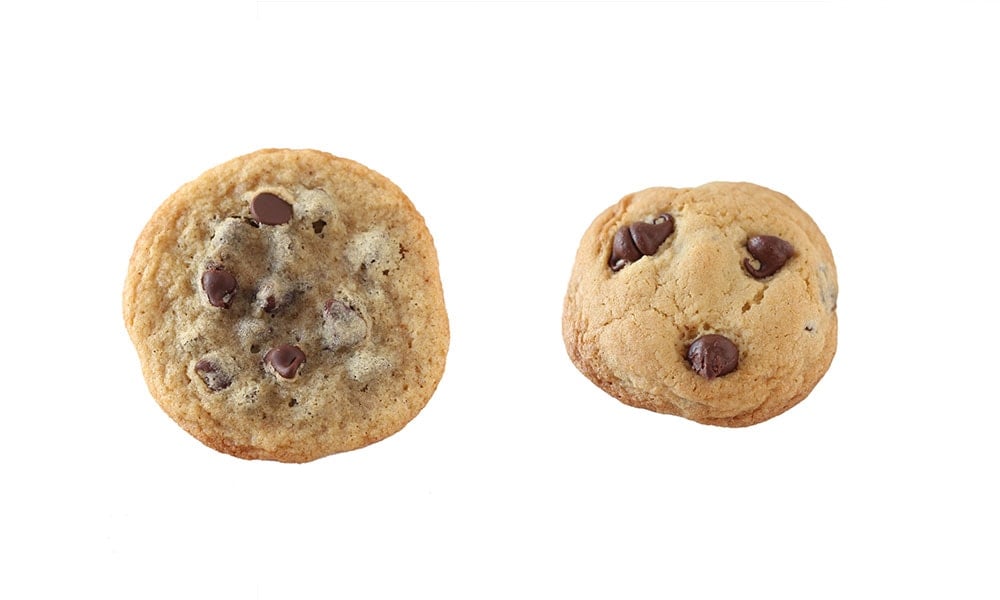 Do you measure flour before or after sifting?

The first step to measuring flour is to fluff up your flour in its container or bag. Simply take a spoon or fork and fluff the flour around inside to loosen it up. 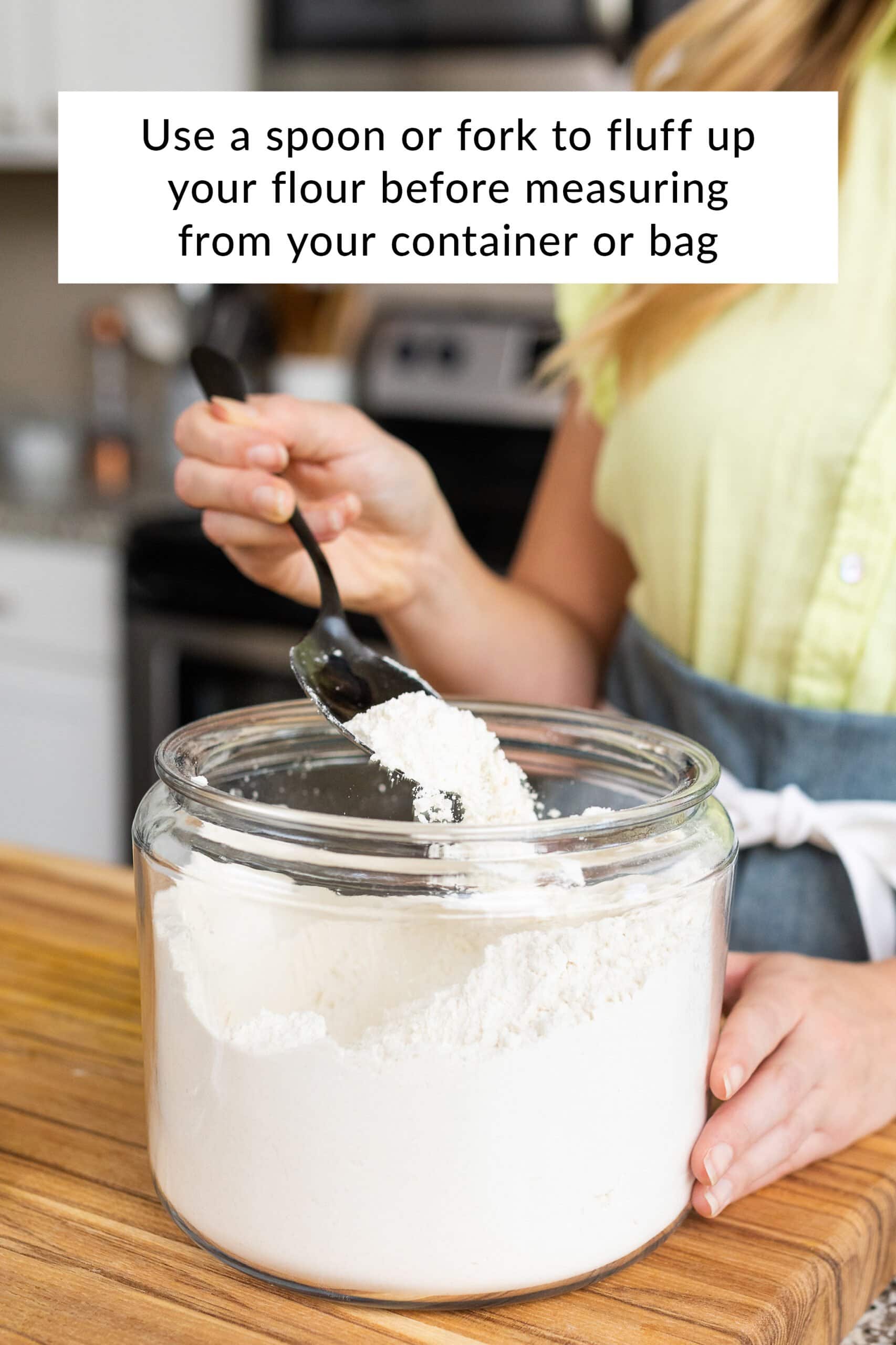 Measuring with a Scale

This is by far the BEST and simplest way to improve your baking instantly. This is my favorite scale by OXO. This one is a cheaper alternative I also like.

Measuring with a scale gives you 100% accuracy. It also dirties less dishes because you aren’t using a bunch of measuring cups. Simply press the zero / tare button to return the weight to zero before adding each new ingredient. The video above demonstrates this fully. 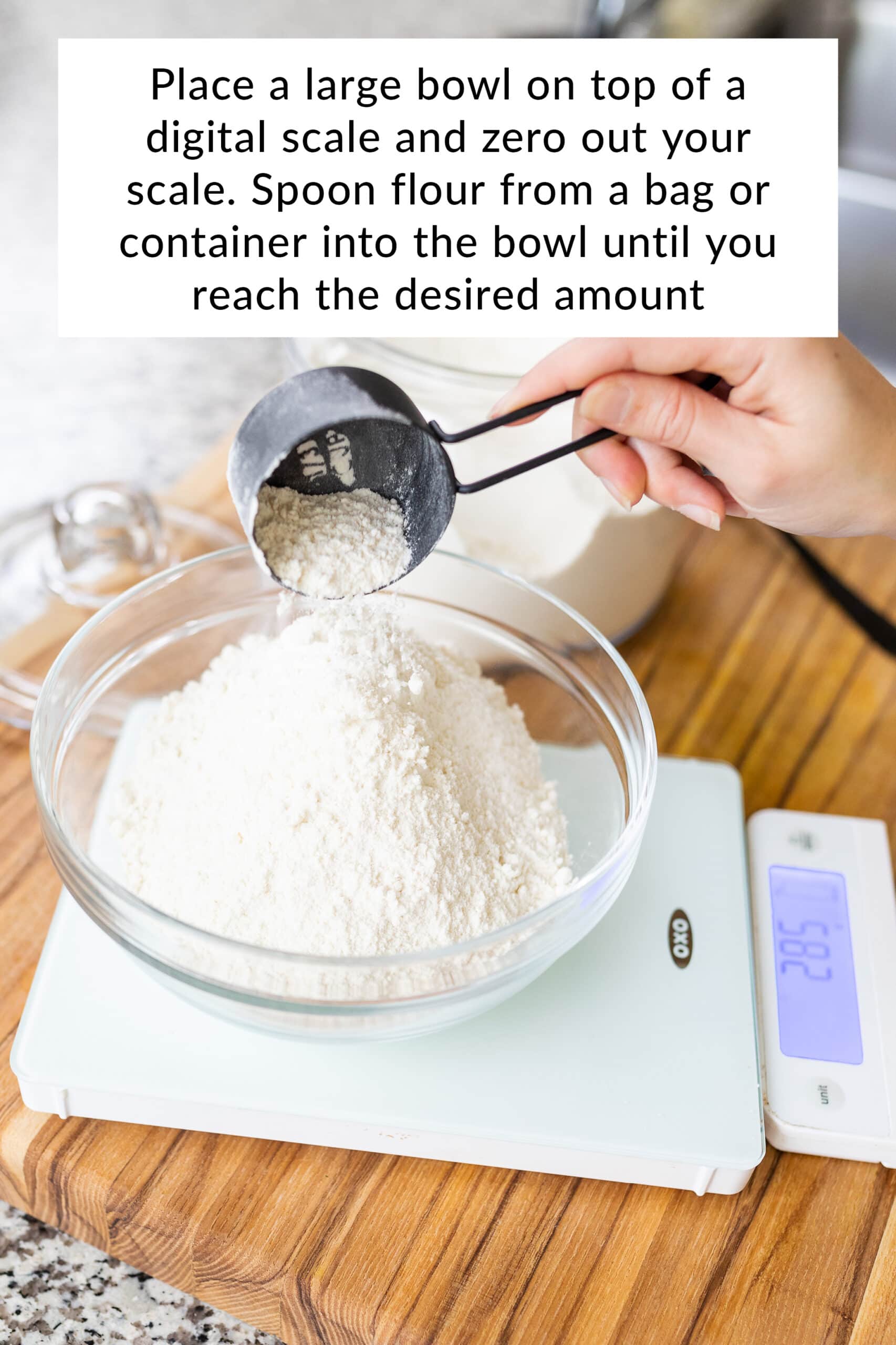 Use my free measuring chart so you know how much 1 cup each basic baking ingredient weighs. Click here to download the chart.

1 cup of every ingredient will NOT weigh 8 ounces. That’s because different ingredients have different densities.

If that’s confusing, think of it like this: 1 cup of rocks would not weigh the same as 1 cup of feathers. That might be an extreme example, but as you’ll see once you download the chart, every ingredient has a sightly different density.

The majority of my baking recipes here on Handle the Heat include weight measurements in grams. I find grams to be the easiest unit to work with. Use the chart if you’re unsure of how much an ingredient weighs, or if you’re following a recipe that doesn’t offer weight measurements.

This chart is actually an abbreviated version to get you started. There’s a larger one with more ingredient measurements within the Magic of Baking online class. There’s actually a TON more info about measuring and flour specifically in the class!

If you don’t have a kitchen scale, this is the second best way to measure flour. This method helps to ensure you don’t accidentally compact too much flour into your measuring cup.

For this method, you’ll place a spoon into a flour container or bag, scoop the flour into your measuring cup until you have a tall mound, then use a knife or sharp object to level off the excess flour. Step by step photos below. 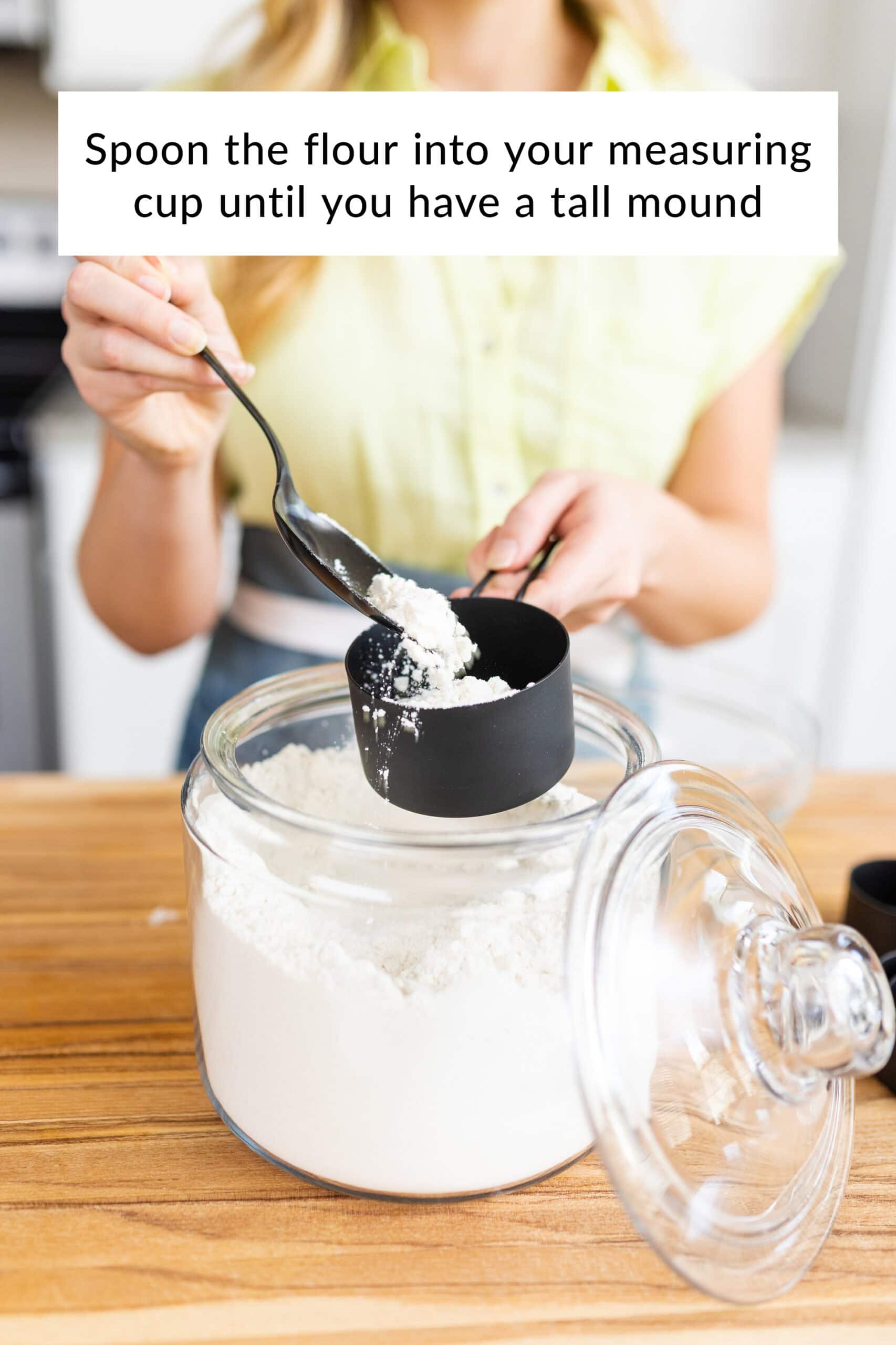 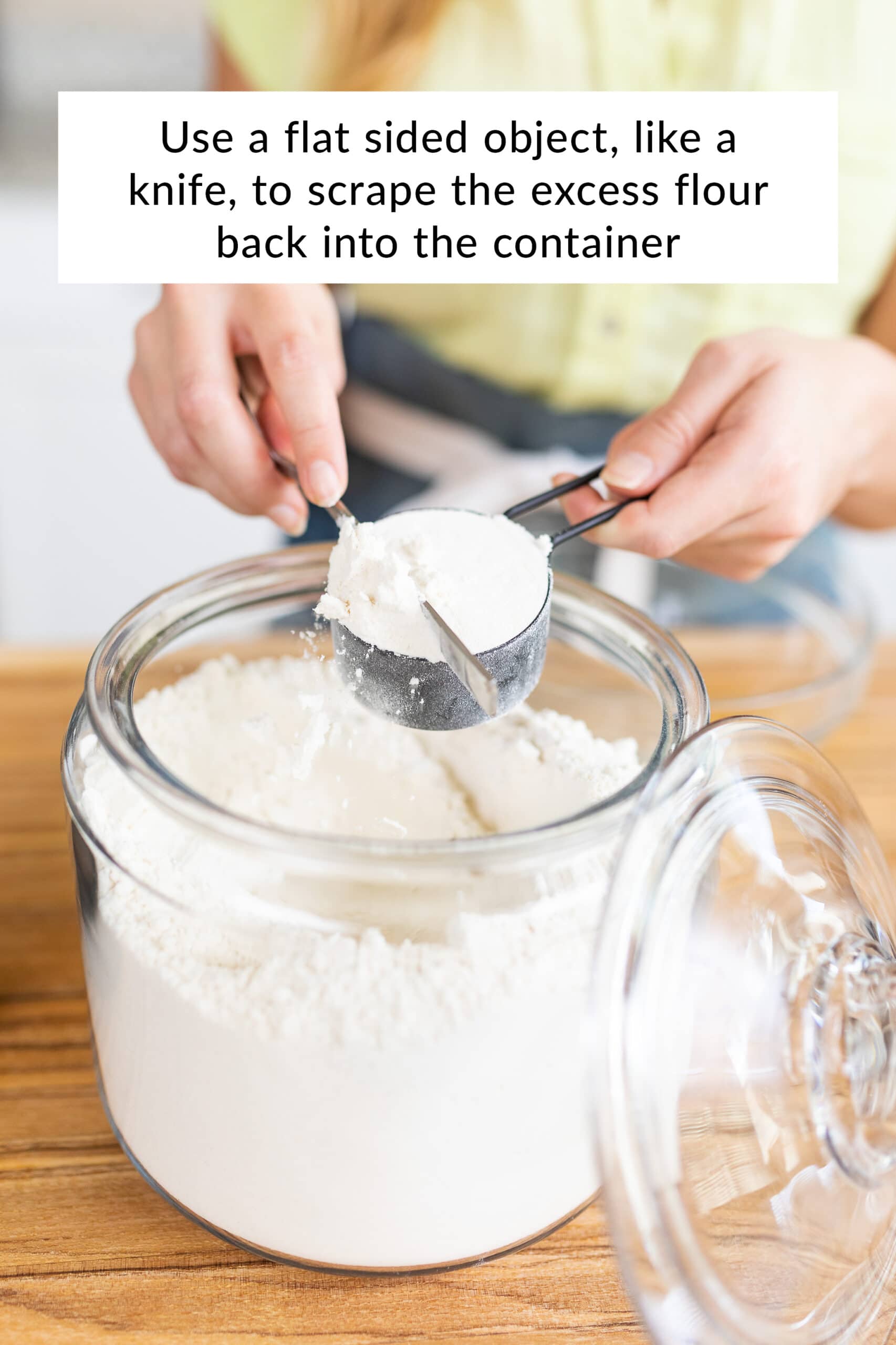 Do NOT place a measuring cup directly into your flour bag or container as you will pack in too much flour. 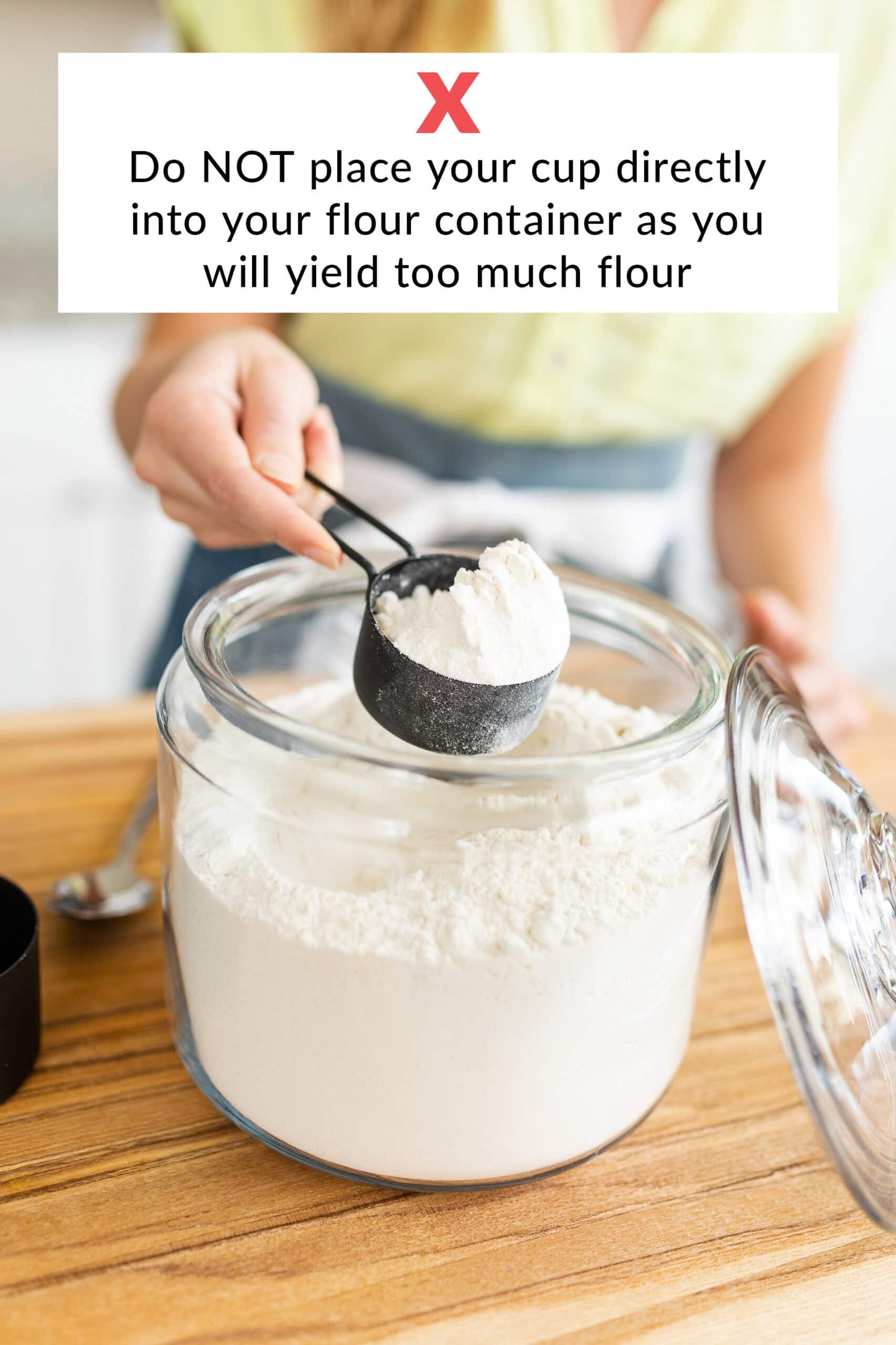 How to Measure Flour with a Scale:

How to Measure Flour with the Spoon & Level Method:

Now that you’ve learned one of the most critical how-to’s for baking, make sure to check out some of my top recipes!