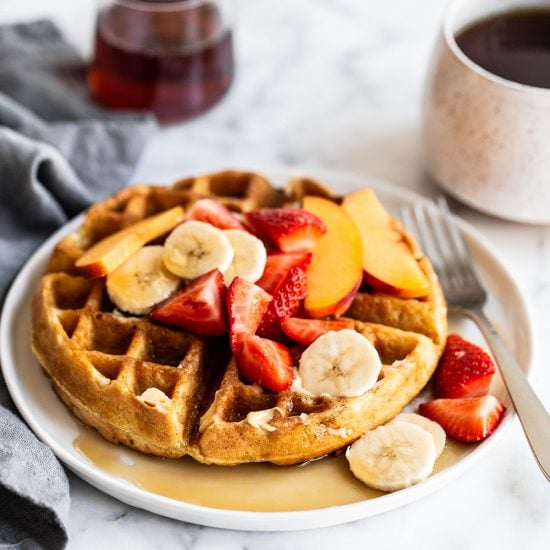 The Best Homemade Waffle Recipe is super easy with perfectly crispy edges and custardy fluffy interiors. Batter can be made ahead of time.

Taste: Simple without being bland! The perfect base for maple syrup.
Texture: The best part! Crispy on the outside, soft and fluffy inside.
Ease: No whipping egg whites! Super easy.
Pros: Go-to classic waffle recipe to add to your repertoire.
Cons: None!
Would I make this again? Absolutely. 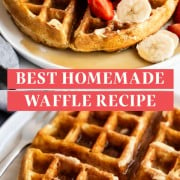 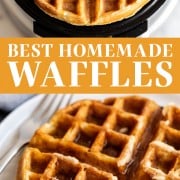 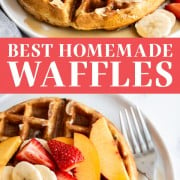 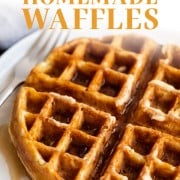 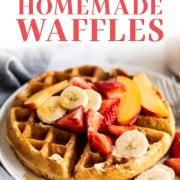 When it comes to special occasion breakfasts I can never decide which route I want to take.

Do I go sweet or savory?

The problem with sweet breakfasts in most restaurants and diners is that it’s always so mediocre and barely worth the indulgence. 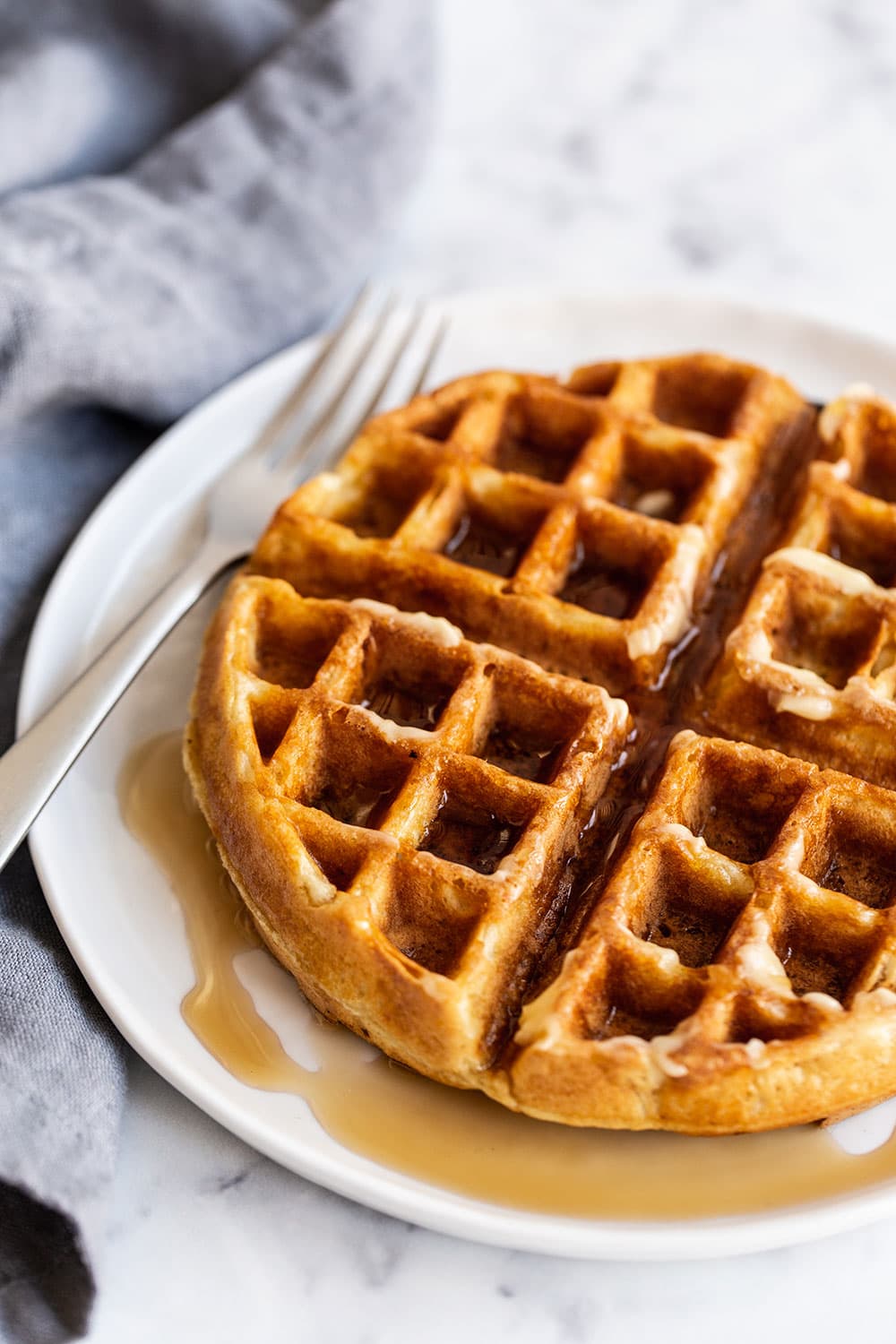 I like my French toast, pancakes, and waffles to all have CRISPY edges and soft fluffy insides. Most places don’t get it right and no amount of syrup can save that.

If you know anything about me, it’s that texture is as important as flavor. 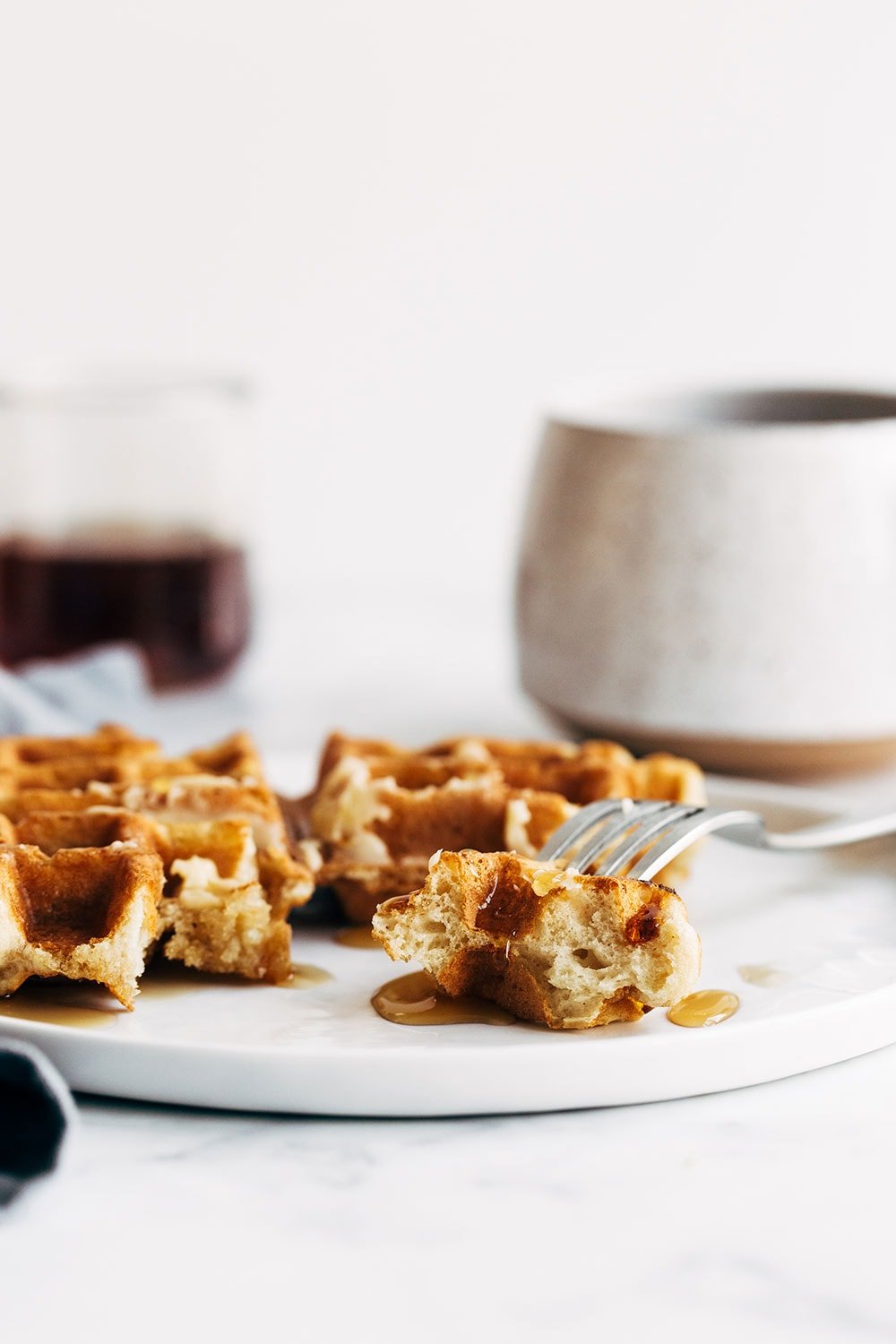 So recently I made it my mission to perfect my homemade waffle recipe. I read through about 5 cookbooks and 15 articles all about waffles. Some of the articles dated back 20 years.

Then I got to testing out different ingredients, techniques, tips, and tricks in the kitchen until I landed on what I think works best. Without taking too much active time or making a humongous mess.

My hope is that this waffle recipe becomes a staple in your kitchen too!

How to Make Homemade Waffles 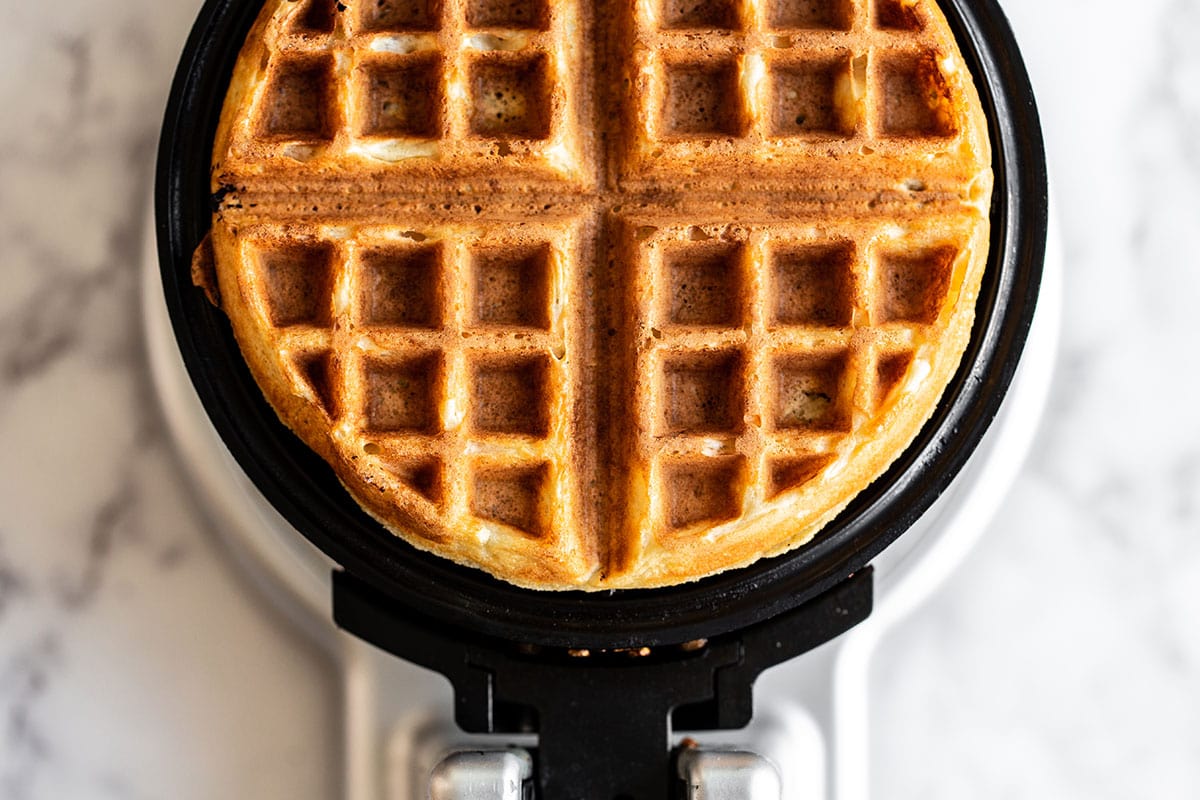 Is Waffle Mix the Same As Pancake Mix?

Although similar, pancake and waffle batters should be slightly different. Waffle batter needs to be thicker and with more fat to get crispy edges and fluffy interiors. That’s why you should always make waffles from a waffle recipe and pancakes from a pancake recipe!

How to Make Crispy Waffles

Thick batter = crispy waffles
A thick batter is what allows the waffles to cook enough on the outside that they get golden brown and crispy, but not overdone in the center. For crispy edged waffles with fluffy soft insides, thick batter is key! That’s in part why there’s both cornstarch and buttermilk in this recipe. They are both thickening ingredients.

Don’t undercook!
Waffles should be deeply golden brown when they’re done cooking. Anything less is likely to create limp and soggy waffles. The baking soda, butter, and sugar in this recipe all aid in developing a beautiful golden crisp crust as well.

Don’t let your waffles sit for too long!
The longer the cooked waffles sit at room temperature on a flat surface, the more the condensation from the steam of the heat will soak the waffles. This is how they get soggy. Place the waffles on a rimmed baking sheet in a 250°F oven until ready to serve. If you have one, place a wire rack on the baking sheet to further ensure the waffles stay crisp.

Do you have to use buttermilk in this waffle recipe?
Yes.

Buttermilk truly does work best in the recipe. You can learn more about the science of buttermilk here. Its thick and viscous texture helps make a thick batter, creating crispy waffles.

The acidity in buttermilk also activates the baking soda in this recipe so the waffles rise and become light and fluffy inside yet crispy and golden brown on the outside. Baking soda aids in browning by elevating the pH level in baked goods.

How to Make Waffles with Fluffy Interior

Whatever you do, don’t over mix the batter!

Once the wet and dry ingredients meet, gently mix with a rubber spatula until just barely combined. There should be streaks of flour left. The melted butter is folded in afterwards. If you continue mixing too much, you’ll activate more strands of gluten to create tough, dense, or gummy waffles.

One of the most annoying things in many waffle recipes is the separation of eggs and beating of the egg whites. It’s an extra time consuming and dish dirtying step that no one wants to deal with in the morning. Plus it’s been argued that the air whipped into egg whites in waffles just gets pressed out the moment you clamp the two steaming hot sides of the waffle iron together.

Simply by adding in 1 whole egg and 2 egg whites, we’re able to get the best of both worlds. A little bit of richness and tenderness from the whole egg without the mixture turning too eggy. While the moisture and protein in the egg whites helps create structure without going cakey. The result? Waffles with crisp edges but soft, fluffy, custardy interiors.

Recently I experimented with allowing my muffin batter to rest overnight before baking. The results were amazing.

I thought I’d try the same thing with this waffle recipe. The thinking is that resting a batter allows the strands of gluten to relax, resulting in a more soft and tender texture. It also allows the starch in the flour to absorb more of the moisture in the mix, thickening the dough or batter. As I mentioned above, thick batter is essential for crispy waffles with soft interiors.

So I didn’t want to allow the waffle batter to rest overnight and deactivate the baking soda. I found 15 to 30 minutes to be enough time to improve the texture of the waffles!

How to Store Waffles:

How to Reheat Waffles:
Reheat waffles in the toaster oven for a few minutes, until heated through and re-crisped. 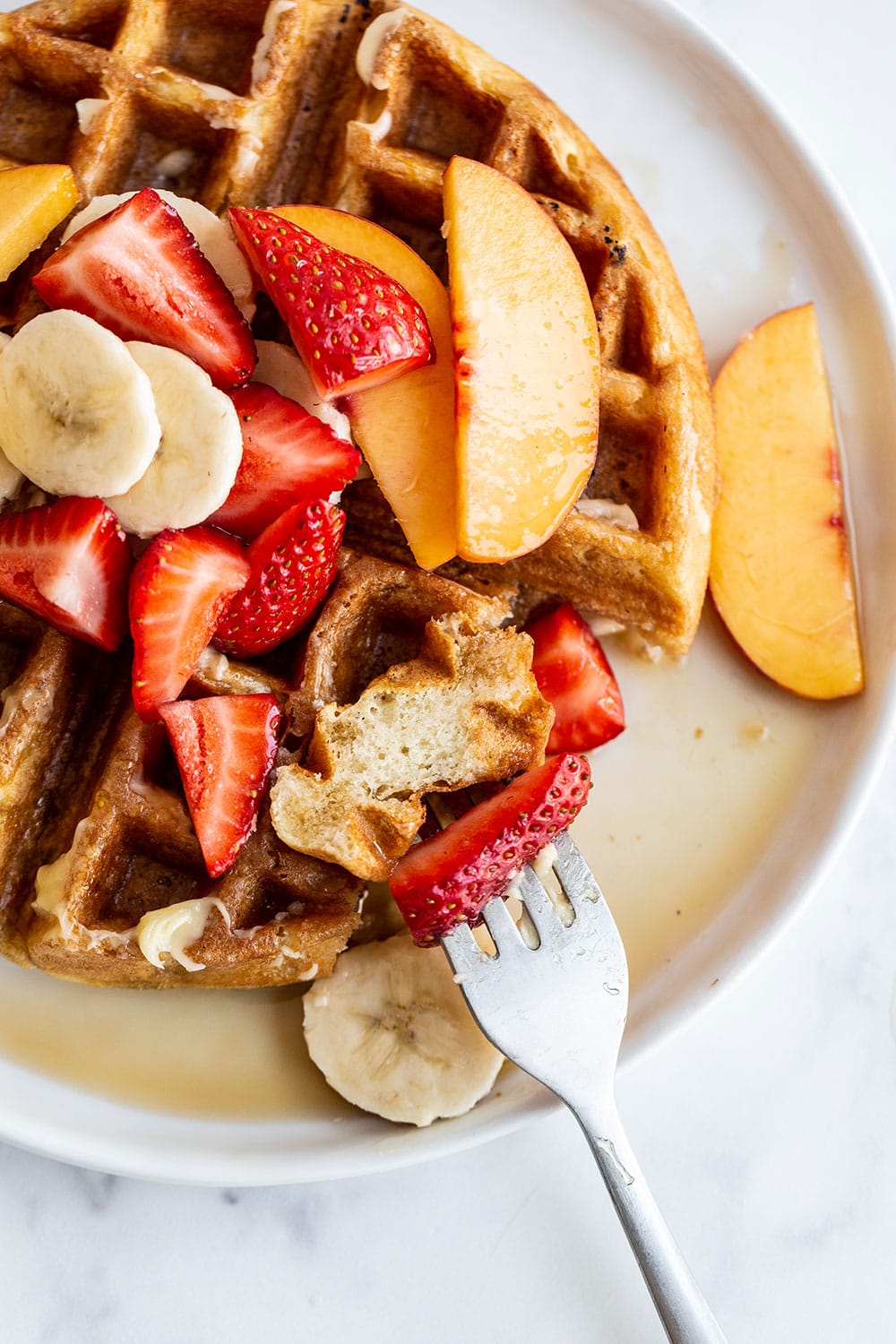 How to make
The Best Homemade Waffles 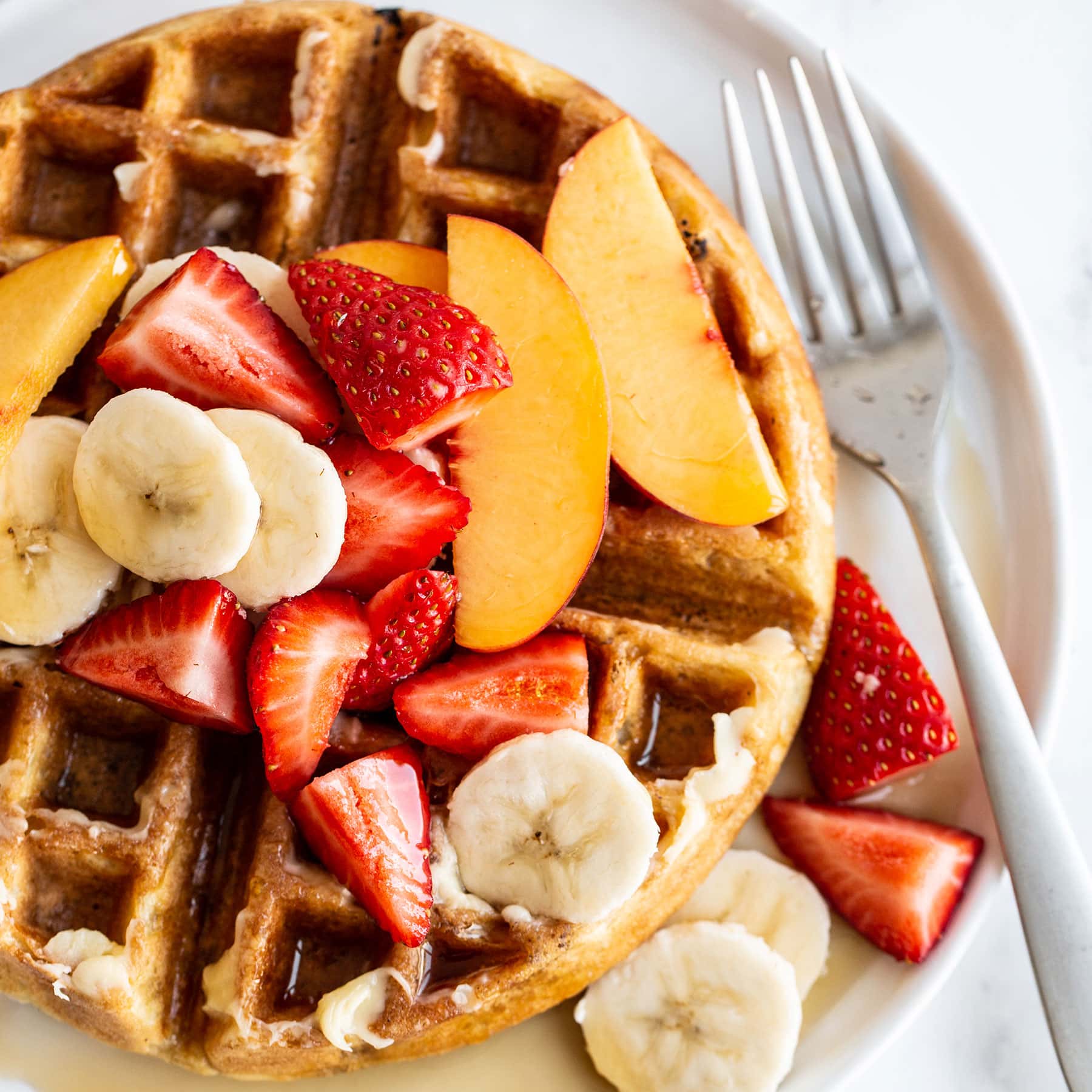 The Best Homemade Waffle Recipe is super easy with perfectly crispy edges and custardy fluffy interiors. Batter can be made ahead of time.